About the meaning of "oversampling"

Recently, I heard one of my colleague said "the 16-bits ADC is enough for us, we can use 'oversampling' tech...". Finally I figured out his "oversampling tech" means to sample many many cycles (AC sampling). But I wonder if we don't improve the sample rate, what is the benefit from sampling many cycles? Can it increase the resolution of the ADC? So my question is:

My colleague's "oversampling" is as below:

Oversampling means to sample at significantly more than the Nyquist Rate.

When using an ADC, the ADC generates quantisation noise because the continuous valued signal has to be translated to discrete output values. If you oversample then this noise power is "spread out" over a larger frequency range, i.e. it has a lower spectral density. So if you apply a digital low-pass filter after the ADC you can reduce the total noise. The reduction would be -3dB if you halved the bandwidth of the signal, which is equivalent to 1/2 bit improvement in your ADC. So oversampling by 16x and filtering with a perfect brick wall LPF would give you an improvement of 4*1/2 bit = 2bits.

Intuitively so you can see this works: say the ADC output is oversampled by 4 so for a specific sample you get 3,4,3,3 ; the average of this is 3.25 so you have improved the effective number of bits (ENoB) of your ADC reading.

Delta-Sigma ADCs shape the quantisation noise, pushing more of it out to higher frequencies so they can get 2 or even 3 bits per octave of oversampling. This diagram (from EETimes) illustrates the point:

On your point (2) you refer to "multiple cycle sampling" as "means to sample many many cycles (AC sampling)".

Your description is a little confusing, but you can use techniques that rely on sampling a repetitive signal over multiple cycles to "fill in" samples that fall in between the sample rate. Digital Sampling Oscilloscopes use this technique. Basically you sample your signal starting from time 0 and then sample again from time T/N (either on stored data or the next input signal cycle), where T is the sample period and N is the oversample rate. You then "fill in" the new data.

By sampling the same points from a periodic perspective you will get some noise reduction once you average the values as described in my answer, but the noise reduction will not match the theoretical reduction because the quantisation noise will be correlated to the sampling. Also, you're missing a trick if you do not recognise the point I made in (2). By choosing the sample frequency to be relatively prime with respect to the signal frequency you would not be sampling the "same points" each period. This gives you more data. If you then choose to average this you get less noise because the quantisation noise will be de-correlated.

Most folk go a bit better than this and, for instance, CD's sample audio at 44.1k samples per second and expect to be able to reproduce an audio spectrum that goes from DC to 20kHz. that's 2.205 times higher than 20kHz. Here's an example picture: -

It shows a benefit for oversampling in that the filtering used to recover an audio signal after a DAC is more easily designed and uses fewer components (take my word for it). I'm involved a lot with sampling analogue signals and we place a minimum sampling rate at 2.5 times to make reconstruction of the signal after leaving the DAC a relatively easy process.

Under-sampling is to be avoided unless you are designing (eg) software radios which rely on under-sampling as a means for demodulation. This is what happens: - 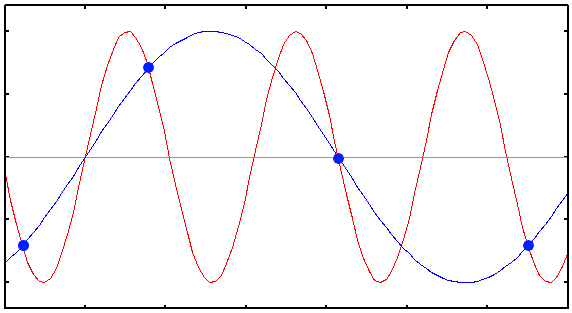 The red signal is the original and it is under-sampled at the blue-dot points - when this is reconstructed by a low pass filter the blue signal is generated and clearly this does not look like the original signal! If you sampled a sine wave exactly at twice its frequency then you'll get a dc level somewhere between -pk and +pk.

Strictly speaking, both CDs and the systems I work on "over-sample" and of course everyone else does to a lesser or greater extent.

So, the benefit of over-sampling is: -

I'm not going to go too deep into this as you are probably a beginner in this subject but please ask if you need more info.

EDIT - following the amendment by the OP: -

Sampling more cycles of a 50Hz waveform may or may not give you what you want. For instance, the RMS value from one cycle can be calculated as X but the next cycle it could be fractions higher or lower. Another problem is that sampling several cycles (or even 1 cycle) may result in only a partial coverage of exact cycles and this will give another error. How you would know that the result is not good is another thing and this I rely on the OP in explaining.

One thing can be said though, if the signal is stable (frequency and voltage and shape) over several cycles, then sampling more cycles improves accuracy.