I am trying to wind some coils for a RF transmitter, so to get the values right, I though of using a LCR meter, but there is a problem with the measurements.

If I use air core inductors the measured values don't differ that much when switching from different frequencies of operation. But if I want to measure an inductor with a iron core (from a nail) I get the following results:

I've read somewhere that inductors below 2mH should be measured with 1kHz, so the 100Hz and 120Hz are off, that I can understand. But 10kHz and 100kHz measurement frequencies shouldn't be that much off from 1kHz, shouldn't they? What am I doing wrong?

A simple LCR meter will not give accurate measurements if the core is very lossy.

It it's truly an iron core (not iron powder) then the eddy current losses will be significant- like a resistor in parallel with the coil. That translates to a lower impedance which the LCR meter will interpret as a lower inductance since it is not measuring the phase angle of the result. Iron powder is also lossy.

An LCR bridge would sort this out for you (and show you the equivalent parallel resistance as well as the inductance), but the bottom line is that your core is going to be way too lossy to use at RF frequencies and you should use a ferrite core or air core that is suitable for RF.

When exposing a conductor (such as the iron nail) to a changing magnetic field, eddy currents develop. The iron core acts like a short-circuit transformer winding. This means that some energy is dissipated in the core.

This worsens as frequency increases, hence massive iron cores are rarely chosen for any transformer/inductor related applications. Grid transformers working at 50/60 Hz are frequently built with laminated (isolated) sheets of iron, so as to prevent eddy currents from developing.

You should consider using a ferrite core.

Another way to measure inductance that I think should be quite accurate would be to breadboard a trivial inductor capacitor notch filter circuit like: 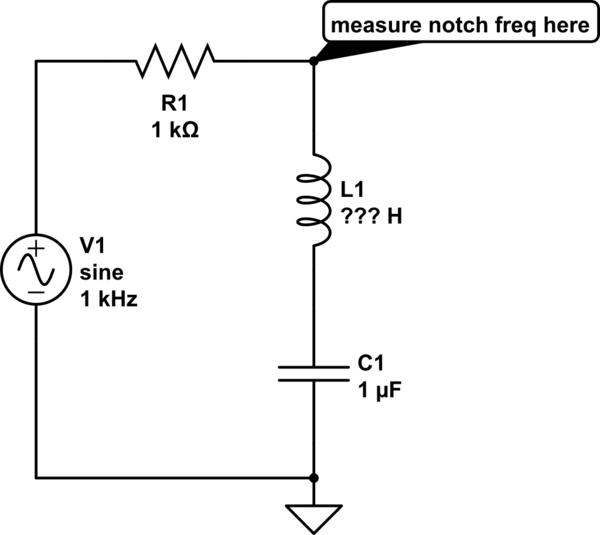 For iron core inductance measurements, drive the coil with a 60Hz voltage; read the voltage and current simulaneously and make the following calculations.

R is the d.c. resistance of your coil.

Not the answer you're looking for? Browse other questions tagged inductance or ask your own question.