When I started learning about electrical engineering, one of the most important safety guidelines that I learned was that voltages over 36V can be dangerous. As my circuits professor put it, 120VAC will sting, and 240VAC will seriously hurt.

Now that I know more about these voltages and their dangers, I'm confused about mains electricity and how safe it is. I often see people (un)plugging power cables into outlets that are behind a desk or a couch without a clear view of what they're touching - sometimes with two hands to get a better grip, a definite no-no in my electrical labs at school. How dangerous is the risk of, for example, touching a finger across both the hot and neutral lines? Do the circuit breakers in a home really guard against this, or is 120/240VAC not quite as dangerous as I think?

For direct contact with a live AC part, in the UK we have residual current devices (RCDs) – these "trip" the supply if the current taken down one of the AC wires is different to the current down the other by ~20mA: 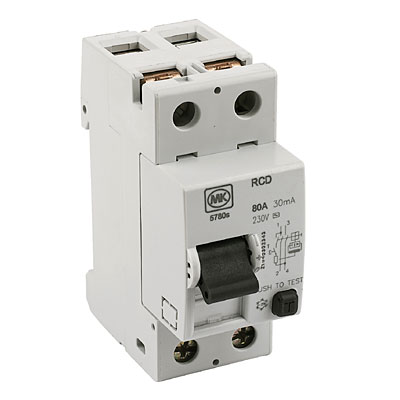 Clearly a fuse wouldn't be useful because the normal current of the devices attached to the AC will be tens or more amps. So if you have an appliance taking 10 amps and you touched one of the AC conductors you'd draw an earth current of maybe 20mA and this would "imbalance" the RCD and trip the supply.

As for touching both terminals simultaneously a different scenario has to be envisaged. I'm talking about AC power systems where one conductor (sometimes called neutral) is "earthy" i.e. it may have a voltage of only a couple of volts to earth – if you touched only this wire then it is very unlikely to trip the RCD BUT who cares – it's only a couple of volts put across your body at best and hardly any current will flow. If instead you touched both AC wires (live and neutral) then there will be an earth current taken from the live that is still significantly greater than the earth current from the neutral and the RCD trips.

Having said all of this ~20mA is still going to sting even if it is only for sub 100 milliseconds. Will it be lethal – possibly to people with heart complaints but will those folk be rummaging under a desk to blindly push a connector into a socket?

For AC systems that are "isolated" from earth, touching any one wire will barely be noticeable, but touching both will not trip an RCD and you'll be in serious danger – the current flow will be directly through the body and from conductor to conductor. Luckily these sorts of installations are not very common but certainly not unheard of. Losing the neutral-earth bond can cause this problem.

In some parts of Europe (I know of Germany and France), the connectors are made in a way to protect you from touching mains accidentially, even if trying hard, while working with the connector:

(image is from wikimedia and public domain)

This particular socket is in use in Germany. France has a slightly different format (which is not compatible with the plug shown in the image, but with another, similar form of plugs) where the earth is not on the sides (labelled “2” in the image) but as a thick pin emerging from the socket.

As the socket is embedded, it is not possible to touch the hot pins while plugging or unplugging. The only metal parts which are touchable are on earth potential, and connect before the hot wires connect.

The only way to get a shock with a Schuko is by stuffing something conducting into one of the holes. To protect little children from doing that, safety inlays are available (and power strips often come with a protection built-in).

Additionally, the RCDs as described by @Andy aka are also used.

As @venny comments, thin two-pin plugs (Europlugs) have metal only on the far end of the pins.

What makes it safe in homes, businesses and schools: Nothing makes mains power safe other than strict design guidelines enforced by various national and international standards. In the United States, the NEC or National Electric Code dictates how homes are to be wired and what devices are permitted and not permitted to be used. It governs things like how wiring is to be ran, how it is to be supported, terminated, enclosed, what wire types are permitted for a scenario etc.

For an electrical device, which can be anything from the receptacle box (box that mounts an outlet) in your wall to an appliance like a television must comply with various standards. These are standards were developed and maintained by various private and government agencies, many of them are international such as IEC. An example in the USA would be Underwriters (UL) Laboratories and Occupational Safety and Health Administration (OSHA).

What keeps you safe is the cooperation between manufactures and these various agencies. This ensures that an appliance connected to mains voltage is safe to use in its intended role.

Where that safe use ends: Once you begin to work with mains power, e.g. you are an engineer developing a off-line switching power supply, then YOU are your own safety agency. You have to be careful and follow basic precautions.

What else makes it safe: Education. Early on in life you are told not to mess with it. No sticking forks or fingers inside outlets, lamp sockets or toasters. This is taught to most children at an early age. Though, some of us were a bit more curious and ignored those teachings. It hurt but led us down a fantastic path to becoming interested in learning the nuts and bolts of it.

Ground fault circuit interrupters are usually only used for circuits that will have appliances connected to them wet locations. Any outlets near a sink such as in a bathroom or kitchen will have GFCI's. Also outlets located on the outside of a home are to be GFCI protected. But DO NOT ASSUME that. The mandate for GFCI's is recent and many old homes did not have to or didn't bother to upgrade.

They work simply by measuring the current of both legs. The current is always equal on both legs unless it is somehow making it out of the appliance. The GFCI detects the imbalance and opens a circuit breaker.

On users getting shocked by plugs: US style NEMA 5-15 Plugs are generally safe enough as the prongs don't make immediate contact with the internal contacts. At that point the gap is normally too small for fingers to fit between the face of the plug and the prongs. Also, if you notice the plug face is quite large which increases the distance between the edge of the face and the prongs.

If your fingers were to make it across both the hot and the neutral then you get shocked. In fact you would have two paths for current, hot to neutral and hot to ground. How much does it hurt? Depends. Are you wet or sweaty? then perhaps it will hurt a lot or even kill you. Dry skin? It might be a quick buzzing sting.

Other thoughts: 120V or even 240V is not that high when you think about it. Power is transmitted at half a million volts on towers or more. It is locally distributed at 2.4-28.8kV on poles and can sometimes be as high as 69kV. Those mains voltages are a compromise between convenience and safety. In large commercial and industrial systems, 277/480V three phase systems are common. In Canada it was common to see 600V three phase systems (also called 550V or 575V systems, it varied a bit). Those higher voltages were for pushing more power down a conductor of the same size.

Remember that in many (maybe most) cases, when someone comes in contact with house current they are not otherwise grounded. Finger-to-finger current on the same hand is unpleasant, and damaging if continued (see videos of cooking sausages this way), but not lethal. The seriously dangerous situations are hand-to-hand, or hand-to-foot, where current goes through the heart and can disrupt its timing.

Fiddling around behind a desk or whatever is unlikely to get one hand onto each of the prongs of the plug. So the large risk there is finding another ground somewhere with the second hand -- plumbing, a grounded radiator, something with a metal case connected to safety ground. Certainly possible but apparently fairly uncommon given the statistics.

There are many things which are suboptimal but which we accept because redesigning them would be more trouble than we want to invest. This seems to be one of them. Given the massive install base, it's easier to install GFCIs than to try to replace a few billion outlets and the plugs to match them.

(Re voltage by touch: My grandfather reports that when he was doing elevator repair one of his partners was an utter maniac who used to check the voltage of a circuit by putting one hand safely out of the way, licking two fingers on his other hand, and quickly swiping them across the terminals. The theory was that this moving contact prevented the lock-on risk that can happen when muscles contract in a hand that's gripping a live conductor, and kept the contact short enough not to significantly damage tissue. STUPID approach, but it demonstrates the point I made above: if you don't have current through the central body core, and the voltage isn't up in the kilovolts range, a brief encounter will probably not kill you. Probably. DO NOT try this at home, kids!)

Don't assume 120V is "safer" than 240V. Both can kill! And it takes very little current at these voltages (i.e. 1/10 amp is enough to electrocute). Circuit breakers and fuses are there to prevent circuits from becoming overloaded which can cause fires. This is why GFCI (ground fault circuit interrupter) breakers or receptacles are used in certain areas like the kitchens, bathroom, garage and pool/sauna areas where there's a possibility that a plugged-in appliance can fall into water. They have an added feature to help protect people from electrical shocks. When installed properly, they will trip (open) the circuit if stray currents exceeding 5mA (1/200A) are detected. As for plugs, never handle the metal (electrically conductive) parts when plugging in or removing them.

Pretty much the whole world has chosen mains voltages between 100V and 240V. These voltages are high enough to keep the losses and fire risk under control while being low enough to not jump very far and for many shock victims to survive (though it's by no means gauranteed, DO NOT GO GIVING YOURSELVES SHOCKS OFF THE MAINS)

Plugs and sockets are designed to reduce the risk of touching the pins while they are live. The ~230V countries in the first world tend to go to greater lengths on this than the ~115V countries or the less developed countries.

I doubt there are any reliable statistics for the probability of death from electric shocks off the mains because i'm sure the vast majority of people surviving such shocks don't formally report them but anecdotally most electrians I speak to indicate that they have had at least one shock off the mains in their career while deaths from electric shock are at a level of a handful per year in the UK (where I live).

Lets not forget that the alternatives to electricity like candles and gas lighting aren't risk free either.

Not the answer you're looking for? Browse other questions tagged voltage ac safety mains or ask your own question.