I'm currently learning electronics and I have some difficulties to understand capacitors in direct current circuit. I read a lot on it and I understand the basic principle but I don't understand why I should use one.

I made a small circuit:

The good thing is that I understand why it happens and it was what I expected but... I don't understand how a component that blocks current once it is charged could be useful. I guess that alone, a capacitor is not overly useful, I guess its utility comes with other components...

Could someone enlighten me a bit by explaining me a basic circuit where the capacitor is mandatory?

I don't understand how a component that blocks current once it is charged could be useful.

To be precise, the current through a capacitor is zero ('blocked') if the voltage across the capacitor is constant.

It turns out that this is enormously useful for, e.g., coupling AC signals between circuit functional sections without disturbing the DC operating point.

For example, it may be that the output of an amplifier is a constant 5V plus some time varying (AC) component.

The output is to be connected to, e.g., a speaker that cannot tolerate a constant 5V across (as it would 'burn out'). 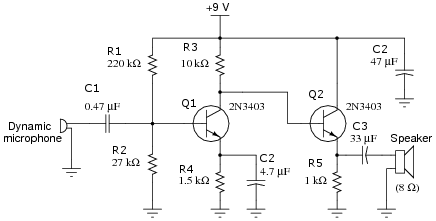 However, the time varying component will cause a time varying current through the speaker and, thus, some type of sound will be produced.

Such a capacitor application is called capacitive coupling.

Sometimes, the opposite is required and this called capacitive decoupling.

Rather than connect a capacitor in series, a capacitor is connected in parallel with, e.g., a power supply. In this case, the time varying components are undesired and are shunted by the capacitor 'around' the load.

A related and overlapping application is capacitive bypass.

There is much more to be said about capacitor applications which are manifold as a perusal of the Wikipedia article "Capacitor" will reveal.

Have you ever wondered why a pendulum keeps the same oscillation rate or.... why, when you hit a cantilever, it oscillates at a constant frequency? Ruler on the edge of a desk.

What keeps the pendulum and cantilever wobbling at the same rate (or frequency) no matter how much the energy decays, is called resonance.

Electrical circuits use the same technique to amplify a small signal to a larger one - it happens to be called a tuned-circuit and is used extensively in radio receivers.

A capacitor "hates" change; if the voltage across it changes it tries to fight it by either taking current if the voltage rises or, by supplying current should the voltage start to fall. Basically you could regard it like a flywheel. A flywheel in an engine smoothes out the mechanical effects of the pistons and makes the engine run smoother.

On the other hand, there is a mechanical component that seems to do the opposite to a flywheel. In electronics, this is called an inductor. It is like an elastic band; if you pull it and let go there is a recoil and it stings your fingers.

Now, imagine a flywheel connected to a motor running at 2000rpm via an elastic band. The instant the motor starts nothing much happens to the flywheel but, gradually it starts to rotate and some time later it acquires a speed of 2000rpm. Ok so far?

What happens next? There is still energy stored in the elastic band (inductor) and this has to unravel (because of recoil) and it continues to accelerate the flywheel to 4000rpm at which point the motor starts to regress it back down to 2000rpm. By the time it drops to 2000rpm, the elastic band has tightened in the opposite direction and needs to keep forcing the flywheel (capacitor) to a lower speed and, after a while, the flywheel is momentarily at zero rpm. This keeps happening but of course friction has its way and eventually the flywheel settles at 2000rpm after several swings above and below 2000rpm.

It's a million miles away from the tuned circuit in a radio receiver it seems but, not really at all; if the motor ramped up and down in speed at the rate the elastic band and flywheel wanted to resonate at, profound speed changes would be seen on the flywheel. This is a tuned circuit in operation; small changes at the correct frequency result in large changes on the output.

Thus, a capacitor in conjunction with an inductor form a very effective signal amplifier for an antenna.

It's so much more than this weasley explanation too.

One use of a capacitor the way that you're using is for blocking DC signals: 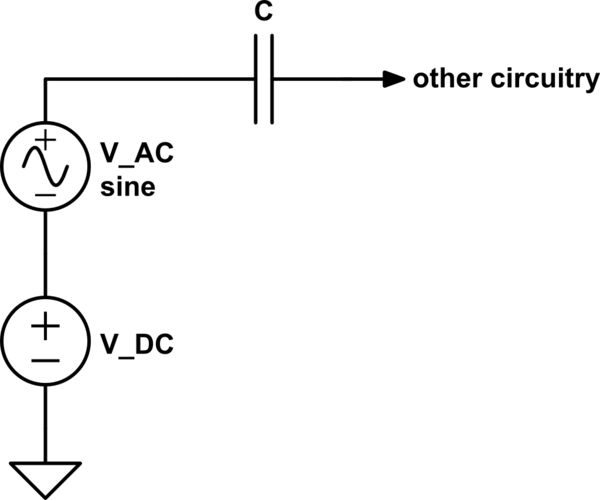 Here, the capacitor will be partly charged, and the DC voltage from V_DC won't affect the circuits on the other side of C. That way, you can effectively look at the AC signal on its own. Oscilloscopes sometimes have this feature - it's known as AC coupling (as opposed to DC coupling).