Why don't we get shocked when we touch a car?

According to this answer to a question about car batteries:

[...] so the entire chassis is an extension of the minus terminal of the battery.

If this is the case, I would expect that you'd get shocked when you touch something metal on a started vehicle if you're grounded.

I've read that 10mA passing through the heart at a high enough voltage is enough to kill a human, but only if the voltage is high enough (which in the case of most car batteries is only 12V.)

Is the voltage simply too low to produce an electric shock?

You don't get shocked because you're talking about DC with no connection path back to the positive terminal of the battery.

If you touch something metal on the vehicle you're now at the potential of the negative terminal of the battery (or the car's ground voltage). If you're also touching earth ground, then a very slight current will flow to balance out earth ground and car ground. But after that's balanced, there's no difference in potential across you and no current flows.

It's kind of akin to a bird resting on a high voltage power line. They don't get shocked much because there's no completed circuit.

The battery is forcing a difference of potential between the - terminal and the + terminal. The chassis (- terminal) is somewhat isolated from the Earth because of the tyres so theoretically the potentials are different however as shown on the attached simplified equivalent schematic, there is nothing in particular forcing a voltage across your body (you will simply put the - terminal potential to a potential closer to Earth after a small equalisation current has settled). 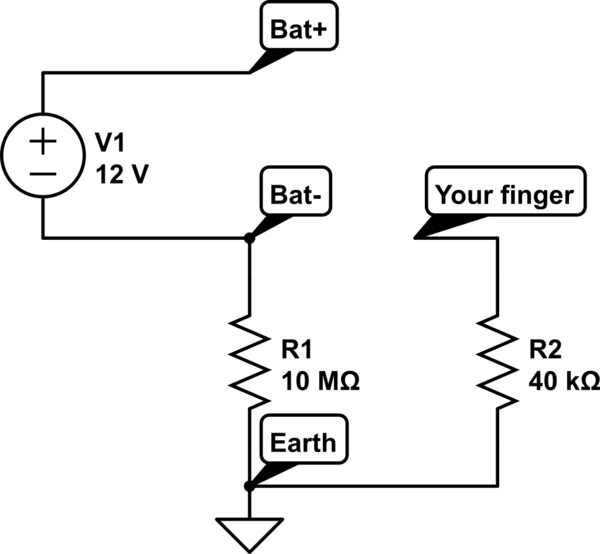 Even if you touched by accident the + terminal, you're right in thinking that what matters is the current going through your heart (there is also the duration of that current but nevermind that for now), however as I said in another thread that current depends on resistance for a fixed voltage. Your body resistance depends on conditions of contact and your humidity, so that's only when you're soaked wet that it would start to get dangerous (60mA with a foot immersed); however engineers never trust users and the + terminal is always covered (rarely the -, at least not on any of my cars).

Edit: [Disclaimer: Warning, the following (and above) is for information only and should not hold me responsible for any harm caused to you or others] When disconnecting the battery before holidays, I always pull the - plug bare handed... And I'm still here to write these lines.

Not the answer you're looking for? Browse other questions tagged batteries automotive or ask your own question.

39
Why do we connect a battery to ground when jumping a car?
19
What are the highest DC and AC voltages or currents that can be considered as safe?

1
Detecting whether a car is running
7
why don't serial lights get dimmer..?
2
How are cell failures handled in large lithium battery packs?
0
Why Exactly Car Charger Stop When Car Is Off?
1
grounding, whats its purpose?
1
A circuit to fade-in and -out LEDs (DRLs) only when the car engine is running?
0
hybrid vehicle DC voltage boost
0
Capacitor Bank Design for Electric Vehicle
3
Automotive Electrical Ground - Chassis