What is this SB component on schematics 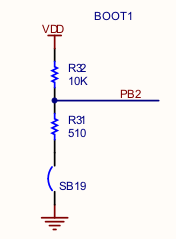 Is the SB19 component a "jumper" (0-Ohm resistor)? On the board itself, some of these are placed, and some aren't, leading me to believe that's what they are. There aren't any 0's on them, though.

EDIT: I put 0-Ohm resistor in parentheses because some people thought I was asking if it was a jumper or 0-Ohm resistor, when I meant that it could be referred to by one name or the other. My bad on the wording.

It's a solder bridge.

I'm guessing that you're looking at schematic on page 37 of this document:

If so, then SB19 is documented in table 4.11 on page 20, under "Solder Bridges". This solder bridge allows you to add/remove the pulldown resistor on the BOOT1 signal.

Not the answer you're looking for? Browse other questions tagged components schematics or ask your own question.