I'm designing a home automation module and finding a way to supply power.

Also I can only find step-down current transformer for current sensing, where can I get step-up transformer? (Or it's not feasible?) 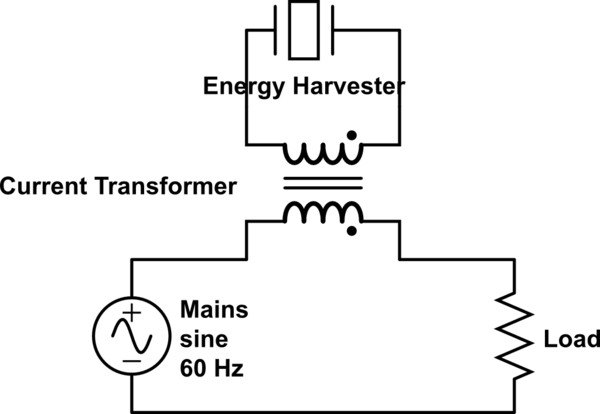 A conventional current transformer will do what you want.
As Jim Dearden says, you probably do not need or want a current step up transformer as voltage will be reduced AND the device will interfere with normal circuit action.

As shown below, if you use a conventional current transformer and feed the main circuit via a single turn "winding" on the core, then you will get an output voltage at lower current. Terminate the winding with a resistor and then use the voltage across the resistor as an energy source. The single turn usually consists of a conductor passed through the core laminations. This circuit produces voltage proportional to load current - so at low currents the voltage may be too low to be useful with a regulator. Replace the regulator with an "energy harvester" if you want to use a very wide range of voltages. If you remove R_CT_LOAD and place a minimum load on the regulator output it will work at low currents but Vin may rise to high values for heavy mains load. A dynamic load scheme could be 'easily enough' devised so that Vout was acceptable under most mains-load conditions. 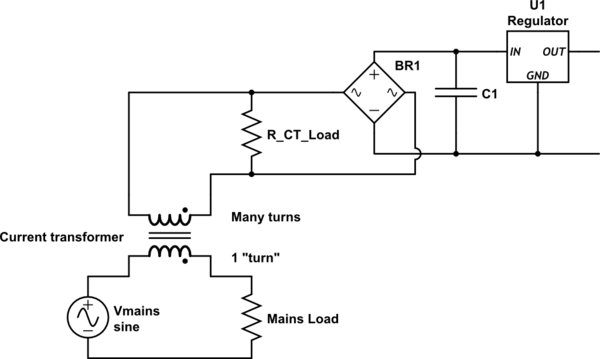 R_CT_Load OR a consistent minimum output load on the regulator is absolutely essential at all times. The resistor value is based on manufacturer's data for the CT used and is designed to give a target V when target current flows in the input single turn.

Note that with any current transformer, if you run it unloaded Vout can rise to very high values and may destroy the transformer or connected circuitry.

It's certainly possible - one of the energy monitoring sensor companies one of our clients uses has clip-on smart meter sensors which harvest energy from the circuit they monitor to power sensors. There's a minimum current that they can sense, below which they don't harvest enough power to talk to the base station.

I don't know off hand what a standard clamp-on transformer will provide in terms of power, but ultimately their sensors can't have anything much different in terms of a transformer ( possibly more turns, but then size limits the possibilities ). Get a conventional clip-on transformer and measure what you can get out of it.

Not the answer you're looking for? Browse other questions tagged power mains energy-harvesting or ask your own question.