This is quite a bunch of text because I have included plenty of background info. However, there will finally be a good, and precise question: Should I use an impedance matching network when connecting cables of different impedance such as 50 Ω and 75 Ω? Possible answers will likely start with "It depends...", and this is why I provide a ton of background info first.

I wanted to get rid of an Ethernet cable thrown down along the stairs of my house. An existing, spare coax cable I had originally installed for satellite TV appeared to be promising as an alternative, cleanly hidden in the walls. Just when I was about to purchase proper little boxes for ethernet-over-antenna-style-coax (75 Ω, capable of something like 270 Mbit/s), I remembered 10base2 - the good old BNC/RG58 coaxial ethernet system, and decided that its 10 Mbit/s were more than enough for my needs. The second hand market for hubs with a BNC connector or even fancy "Ethernet Converters" (coax to twisted pair) is still very good. The only thing I was unsure about was the impedance issue. 10base2 uses a 50 Ω installation with RG58 cable, and pretty much any coax for home antenna systems (like my spare cable for satellite TV) has an impedance of 75 Ω.

I am now happy to report that 10base2 is robust enough to handle the abuse of being run through 10...20 m of inappropriate 75 Ω coax. There, I fixed it! Yay!

I was still curious if the hack I had done was really bad (as in: just barely good enough) or maybe even quite acceptable. I looked at the signal with an oscilloscope. The setup is like this: 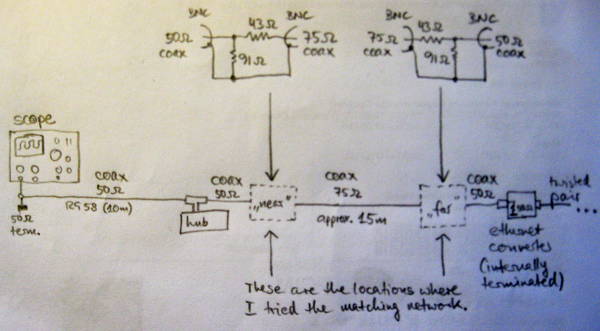 Without any matching between the 50 Ω and 75 Ω segments of the coax, the result shows a very obvious amount of reflected noise. Despite this drawback, the "eye" is still wide open, and the decoders can happily do their job, resulting in a packet loss of exactly zero. 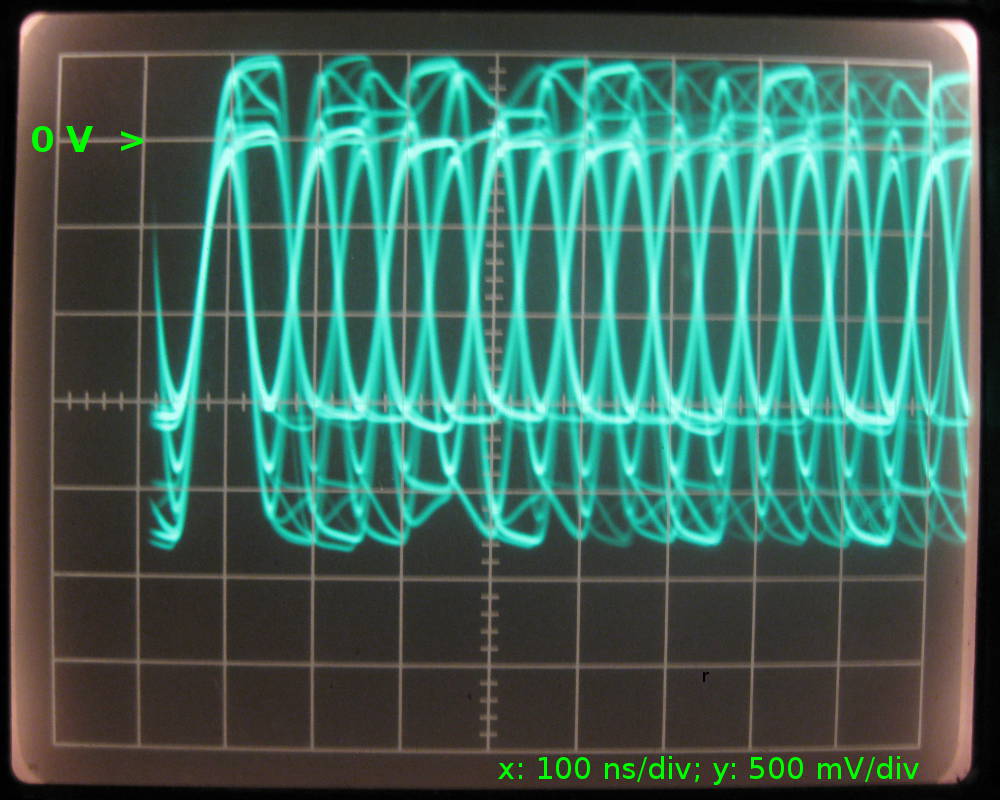 We're looking at a combination of the signals transmitted and received by the ethernet hub near the oscilloscope. Judging by the "clean" part, the transmitted signal has approx. 1.9 Vpkpk, and the received signal has 1.6 Vpkpk. If it's safe to assume that both drivers have an output of the same amplitude, we can even calculate the loss introduced by the cable: 20×log(1.6/1.9)dB = 1.5 dB. Good enough, because the calculation for 15 m of typical coax with 6.6 dB/100 m yields 1 dB.

The noise is greatly reduced when a matching network is inserted at the near or far ends of the 75 Ω part of the coax. It looks like this (Credits to this source)... 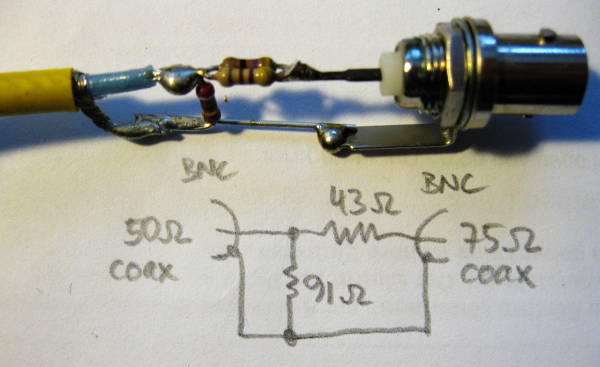 With the matching network at the near end... 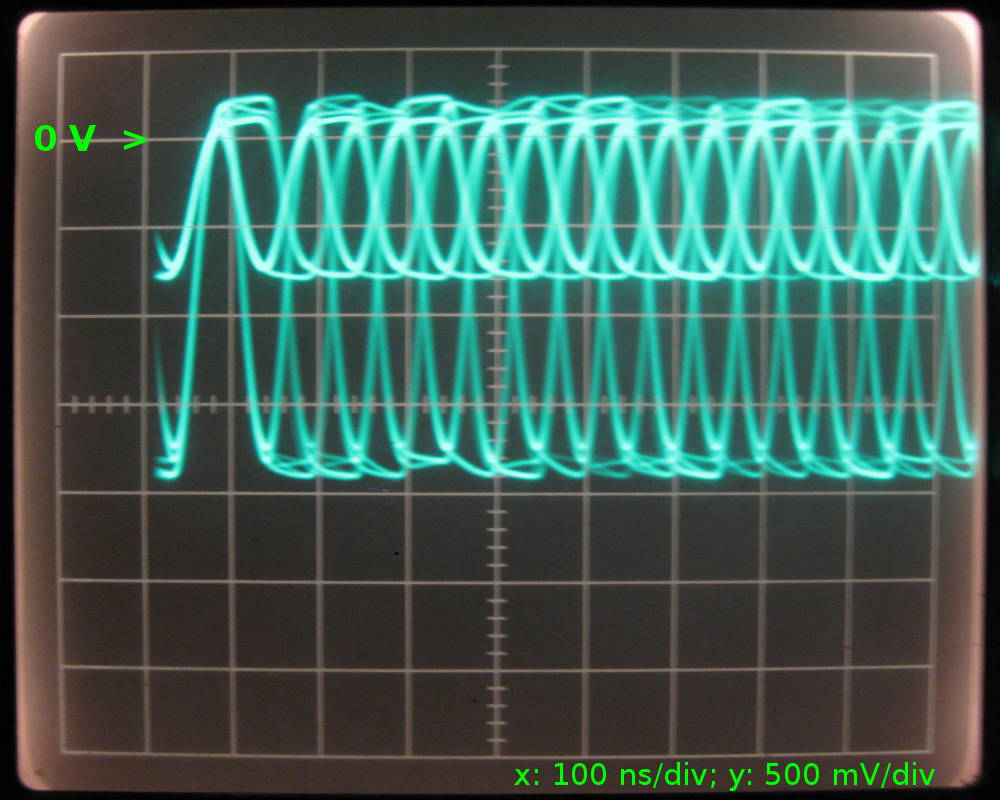 ... there are still some reflections visible travelling back from the unmatched far end.

With the matching network at the far end, there must also be reflections along the comparatively short 50 Ω cable between the hub and the discontinuity labeled "near", but as I've learned from a friend, the scope can't "see" them, because they are absorbed by the driver. Also, a part of the signal from the "far" driver is reflected and travels back along the 75 Ω cable, and gets terminated into the matching network on the far end: 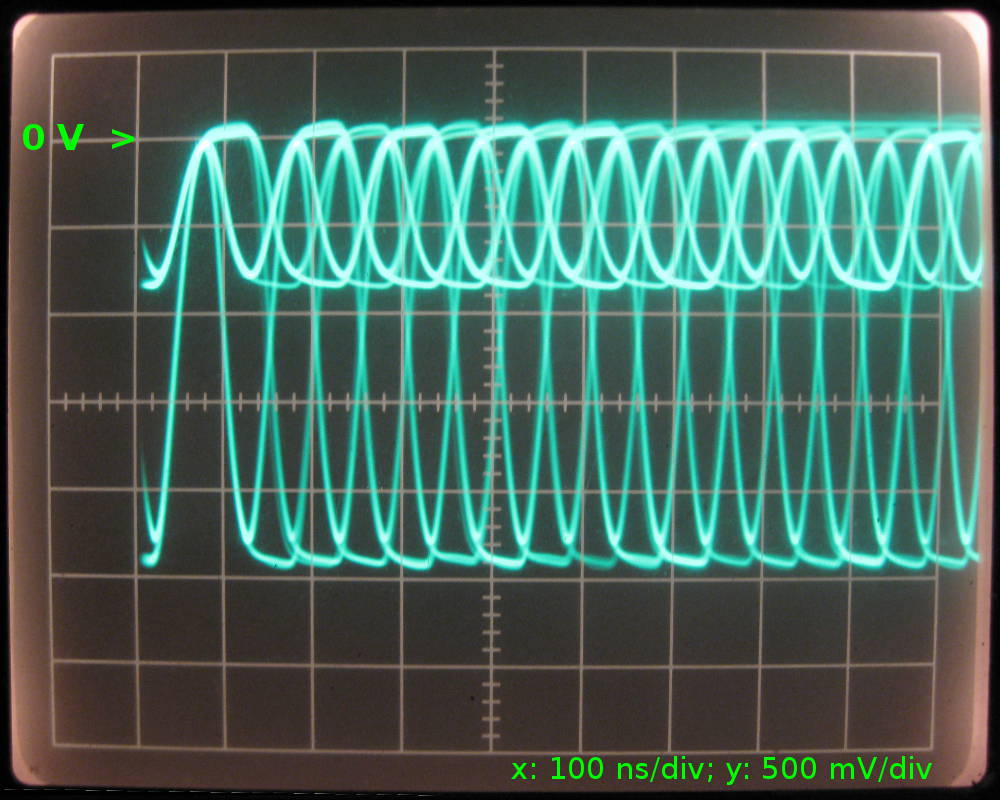 Compared to the unmatched setup, the amplitude of the signal from the far end is approximately halved (-6 dB), and this is in good agreement with the theory that predicts a loss of 5.6 dB over the network and the impedance it "looks" into.

Now, why not use two matching networks at "near" and "far"? Well, 10base2 is designed for a maximum length of 185 m of RG58, having a loss of 6.6 dB/100 m or 12.2 dB/185 m. Therefore, two of my resistive matching networks would already eat almost all the signal and bring me so close to the allowed limit that, including the cable, there is too much loss altogether. I am still in doubt that a low-loss, transformer-based solution would work because I think 10base2 ("cheapernet") needs a DC path: "DC LEVEL: The DC component of the signal has to be between 37 mA and 45 mA. The tolerance here is tight since collisions are detected by monitoring the average DC level on the coax." (Source: p.4; also backed up by this data sheet) Then again; the resistive matching network will also put any DC bias in trouble...

... the short question again: Should I use an impedance matching network when connecting cables of different impedance such as 50 Ω and 75 Ω?

Anything between "I prefer the unmatched/matched setup because I like this/that oscillogram better" to answers with plenty of background info on RF or the low-level hardware of 10base2 is greatly appreciated.

If you have access to the inside of the Coaxial Transceiver Interface (CTI), you can modify the circuit between the chip (8392 seems to be the type made by a large variety of manufacturers and also the type that's used almost exclusively for pretty much any interface made by anyone for 10base2 adapters) and the BNC connector. A trade-off for cables with 75 Ω and 93 Ω is possible at the cost of allowed bus length. National Semiconductor made an Application Note on this topic, called AN-620 (pdf, Sept. 1992).

But even after finding this app'note, it would be great to find some background info about what's inside an 8392, i.e. what one would have to use to build the interface using discrete parts and maybe some glue logic and opamps.

The refection coefficient due an impedance mismatch is: -

Where Zo is the impedance of the cable and R is the source or load resistance.

Experience1 has shown that the resistive matching network is a good option for 10 base 2 Ethernet only at a first glance. It helps improve the situation when it comes to RF signal quality, but I have overlooked the issues caused by the way 10 base 2 handles collision detection, which are low-frequency effects and can be understood by simple DC considerations.

The connection will work best without any resisitive impedance matching network between the 50 Ω terminations and the 75 Ω cable segment.

Signal reflections and overshoots caused by the mismatch won't bother the transceivers much, but collision detection looks at the average (filtered) current into the cable, and with the resistive matching network, the current level is sometimes out of the specified limits. It all boils down to a consideration of DC currents created by the transmitters' voltages being dropped across the 50 Ω terminations of the cable (I=U/R). Adding thee resistive network will create a parallel path to the terminations and increase the DC current. This may sometimes mess with the collision detection. In my experience, this will mainly happen on hot summer days with high humidity levels, probably because of increased DC leakage along the dielectric in the coax.

TL, DR: 10 base 2 will easily handle the abuse of being sent over 75 Ω antenna coax. Overshoots, reflections, and any other side effects of the signal's RF part are not a concern. However, the collision detection looks at low-frequency currents, and it needs exactly two 50 Ω termination resistors at each end of the coax. Adding resistors will change the DC resistance of (50 Ω)/2 = 25 Ω and cause the collision detection circuits to work unreliably.

Having read around the internetsTM and having talked to some pretty experienced, old-school LAN experts has shown that this is a very common misconception. Therefore, please excuse the bold typeface font above. The misconception is even on wikipedia, as this related question shows.

Not the answer you're looking for? Browse other questions tagged ethernet impedance-matching coax manchester-coding or ask your own question.

3
A low cost method to perform Eye-Pattern Testing on 100 MBit and 1 Gigabit Ethernet Transceivers
4
Does the voltage increase on 10Base2 and 10Base5 ethernet when the signal is reflected? Will this trigger the collision detection?

6
Cable Splitter Loss and Impedance Matching
4
Does the voltage increase on 10Base2 and 10Base5 ethernet when the signal is reflected? Will this trigger the collision detection?
1
Voltage signal significantly drops when BNC cable is connected
0
Convert BNC to Ethernet to Coax/HDMI
0
Coaxial cables vs zip cords for unbalanced signalling
2
How does this impedance matching circuit work? How to simulate it correctly in SPICE?
0
calibrating vector network analyzer with \$75\Omega \$ coax
0
THINNET 10BASE2 Network using RG-58 Coaxial Cable operating frequecy?
0
How to connect a low impedance RF amplifier to an antenna?
3
“To ground” or “not to ground” a coax to prevent RF ingress?