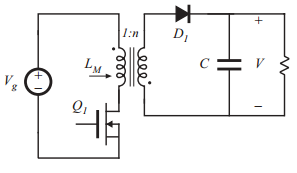 If you look at the flyback converter circuit above, the current only flows in one of the coils at any instant of time. What stops the magnetic field generated by the coil in series with the MOSFET to induced a current in the coil in series with the diode resulting in a simultaneous flow of current through the diode and the MOSFET at the same time? 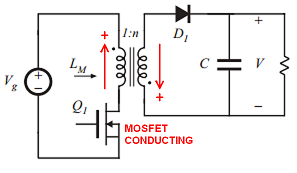 This is what happens in flyback designs during the energy charge part of the switching cycle. When charging is complete, the secondary flips polarity and drives current into the load and capacitor. The polarity flip is the flyback effect.

In reality there will be a little leakage current through the diode during the charge part of the cycle but nothing to alter the basic premise of this answer.

Not the answer you're looking for? Browse other questions tagged mosfet diodes switch-mode-power-supply flyback or ask your own question.

2
Can a reed switch be used instead of a flyback diode?
2
Danger of Saturation of Primary Coil in a Flyback
2
Current flow in a simple flyback topology
0
Flyback across PMDC motor
7
Are flyback diodes needed for this op-amp voltage controlled inductor?
0
Confusion about currents in switching circuit using flyback diode
0
Relay current flow
0
How does flyback converter with two MOSFETs work?
0
Flyback and electron flow