How is this possible? And is there a general formula for expressing the voltage across the dependent current source? It says that the controlling current is expressed as: $$ I = \dfrac{V_s - V_1}{R_1} $$

(which I do understand as per ohm's law). But for the dependent source, there is no resistance. I know if you are using mesh analysis, you can assign an arbitrary resistance, say Ro, which will factor out of both mesh equations that contain a current source and it is therefore not an issue.

Also, if I applied KCL to the supernode, would it look like: 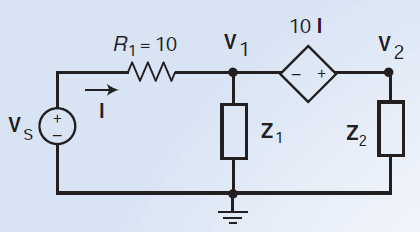 How is this possible?

(2) it's a current controlled voltage source so the 'gain' is a transresistance - the gain has units of ohms.

Transresistance is essentially from transfer resistance. If the controlling current were in fact the current through the source, the source would be indistinguishable from resistor.

Since the controlling current is elsewhere, the voltage across the source is proportional to a current elsewhere thus, transfer resistance.

And is there a general formula for expressing the voltage across the dependent current source?

To be sure, this isn't a current source (see point 1 above), it's a voltage source controlled by a current.

Call the mesh on the left mesh 1 and the one on the right mesh 2, with directions both clockwise.

When writing KVL equations, you need to express the voltage in each branch in terms of the mesh currents.

Now your I variable is just the same as I1, the current in mesh 1. So it's easy to write the voltage of the dependent source in terms of mesh currents.

Your KVL equation for mesh 2 is