Can I do something similar to power these 3W red LEDs? How would I modify it? The whole setup cost me $12 USD. I know fairly little about electronics, so I want to make sure I'm doing things correctly. Also, the "data sheet" on my LEDS says "Forward Voltage:2.2V~2.8V Forward Current: 700mA", and even without doing any math, this doesn't add up to 3W, it's more like 1.68W. After checking all the LED sellers, they all seem to do this. What gives? I've heard of Red LED voltage drop, but don't understand how it works.

In addition to Russell's answer, I'd like to provide an alternative which I used for my 3kW Strobe light I designed, which uses 24V and does 120A during the pulse, over 48 parallel 12W white LEDs.

In your case you would use a string of LEDs in series as Russell describes, but instead of the LM317 you may use a low-side N channel MOSFET and a "hardware" constant current feedback loop. The feedback consists of a "shunt" resistor and a NPN transistor and another resistor or two.

I found the picture I used as reference for my design, which worked fine. I had my limit at 2.3A per LED though, yours will be much less crazy. Lower current is better for heat issues anyway. 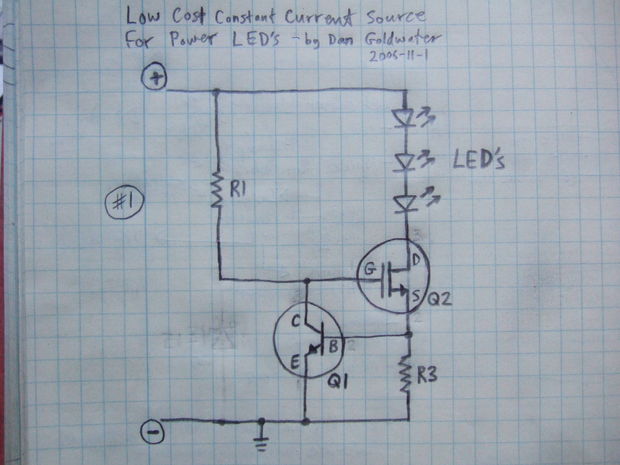 It is very simple, you merely calculate the voltage built up over R3 in the picture so that by Ohms law, your required current will generate 650mV-700mV, enough to turn on the base of the NPN transistor and therefore 'turn off' the MOSFET's gate.

R1 in the picture should be something useful, like 2.2-10K as a pull-up to charge the Gate.

Obviously make sure R3 is rated to handle the current going through it. For 1 Amp and to create 0.7V drop you can use a resistance of 0.7 Ohms, and it will need to be rated 1.5x above the expected dissipation just for good measure, so I^2 * R = ~1.5W-2W rated axial or chip resistor will work fine. I did all of my stuff surface mount, but in my huge strobe light I never went above 5-10% duty cycle in reality, which means I could have down-rated my components significantly, but I kept them as high power packages just in case.

LM317 will act as CC (constant current source with R across Vout- Vref and output from Vref. Icc ~= 1.2V/R.

Anyone is welcome to add a diagram.
Time vanishes ...

1
Why are these LEDs listed as 3W when the forward voltage is 2.4V, and forward current is 700mA?

1
Why are these LEDs listed as 3W when the forward voltage is 2.4V, and forward current is 700mA?
5
How many LEDs can you chain in series?
1
High power led driver for COB leds
2
Powering high power LEDs without resistors
1
Converting appliance LEDs from constant current to constant voltage to allow for dimming
0
Appropriate power supply needed to power 15x 850nm IR LEDs
2
Do LEDs rated voltage really matter if you sufficiently limit the current?
1
What power supply do I need for this LED driver?