Can I turn Radio waves into light?

Wikipedia says that the frequency of light is 300 THz. I've made a radio waves transmitter that transmits about 100 MHz.

If I increase the frequency of the transmitter to 300 THz, will the antenna produce spark or light ?

I know that it is a science fiction question but please, don't make fun of me :)

300THz transmitter? (the band between infra red and microwaves) - with a lot of technology and know how perhaps. See http://www.rpi.edu/terahertz/about_us.html 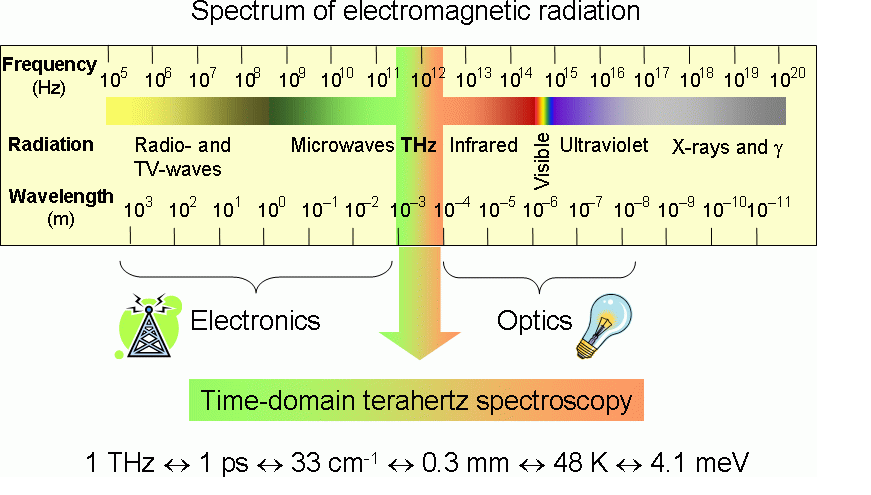 In theory there is only one basic difference between a 'photon' of radio waves, light waves, far infra red waves, microwaves, ultra violet waves, x-rays etc. and that difference is the energy the photon. This energy can be calculated using the simple formula:

If you crunch the numbers you will see that the photonic energy of a radiowave is millions of times smaller than that of a visible light photon.

Light emitting 'transmitters' (into optical devices) use electrons jumping from one energy level to another rather than using a 'tuned circuit'. It turns out that the energy gap is just the right amount to give a visible light photon. There is no 'one technology fits all' that can produce photons of different frequencies (energies) across the entire spectrum. Even solid state devices become more exotic as you demand higher and higher frequencies and circuit boards start take on the appearance of complex plumbing.

Can it be done?

Unfortunately my crystal ball is on the fritz at the moment so I can't see in the future.

Can I do this circuit practically o_O?
Is there any transistor or IC that can oscillate 300 THz?
Can I find an inductance (coil) of 0.0025 pH and capacitor of 1 pF?

Not quite, no, and no. But this is an area of active research: The Truth About Terahertz.

The basic principle of the tuned LC radio emitter is resonance. The techniques for producing high frequency tuned signals at higher frequencies are also based on resonance, but because the frequency is higher the resonant elements need to be much smaller. You also need some system for amplifying the signal, bearing in mind that terahertz is above the operating speed of almost all transistors. You can get tuned light of a particular frequency using a LASER (Light Amplification by Stimulated Emission of Radiation), which is also a resonant process. Intermediate frequencies can be produced by a device called a Klystron, which is halfway between a vacuum tube and a laser in its operation.

It may be possible, but I don't know of practical devices that work in this fashion. If you search likely terms you'll find some work, but more along the lines of physics experiments than electronics. Transistors tend to stop amplifying at under 100GHz even for really good SiGe IC transistors.

In the reverse direction, there are (sort-of) practical light detection devices that use a nano-antenna array. I have seen some work in Germany that looked promising, and I'm sure they're not the only institute working on it. It's easier to go from light to DC than from DC to light.

An electro-optic modulator does what I believe you are asking about. Here's an extract from the wiki: -

Electro-optic modulator (EOM) is an optical device in which a signal-controlled element exhibiting the electro-optic effect is used to modulate a beam of light. The modulation may be imposed on the phase, frequency, amplitude, or polarization of the beam. Modulation bandwidths extending into the gigahertz range are possible with the use of laser-controlled modulators.

As you can see, AM, FM or PM are achievable.

Hmm, Well there are non-linear crystals whereby you can mix "light" of different wavelengths. Search for OPA's (optical parametric amplifiers). But you have to start with light... a laser. I guess in principle you could start with 100MHz and double up to 300THz, but that's a lot of doubling :^) If I stretched your question a bit, and asked how to turn electrons into light... (not in an atom) Then I would think about accelerators, where you get synchrotron radiation. And at the end of an electron beam you can build a free electron laser. (Years ago I worked at an FEL, not quite visible (3-10 um), but you could see it when it blew holes in things.)

Not the answer you're looking for? Browse other questions tagged frequency light wave spectrum electromagnetic or ask your own question.

5
Need to create a magnetic coil (no core) for low frequency field (20Hz-100Hz)
4
Why do we not use both E and B fields for a receiving antenna?
3
Can an inductor/capacitor/resistor combo emit the same frequency as a given crystal oscillator?
3
How can I modify the frequency of a simple 433MHz transmitter module?
0
Electromagnetic waves antenna via microcontrollers (Transceiver and receiver)
4
How can a DC spark create EM waves?
0
Radio Waves propagation (Intuitive Understanding of Wave propagation)
1
Can we use any electromagnetic wave (eg: radio wave, light waves etc) for cooking food?