I've looked extensively about this topic, and can't find any answers. Hopefully someone on here can help.

I live in Texas and have 120V power in my house. I'm using a lamp touch dimmer to dim two ceiling boxes in my kitchen. The sensor wire goes to two metal plates mounted under the lip of my island. The dimmer works GREAT with incandescent bulbs. But my wife picked out these beautiful low voltage (12V AC) halogen lamps for over the island. There are two, and each lamp has its own magnetic low voltage transformer in the ceiling box. The dimmer will not illuminate the halogens at all by themselves, but it will illuminate and works perfectly if I put any incandescent bulb in parallel with them...

Is there a way to put a resistor on the load side of the dimmer to trick the dimmer into thinking there is an incandescent bulb there that I can hide in the box with the dimmer module? If so, how much resistance and how do I verify it will handle the voltage?

I have tested many bulbs in parallel and the lowest wattage bulb I can find is 15 Watts and only 82 Ohms and works great. I tried a 1KOhm resistor and it worked on level one dimming, but popped on level two and took out my first 150 watt dimmer.

One idea is to simply put a 15 watt bulb in the attic, but I figured there has to be a better solution.

The dimmer is made by Westek, I currently own the 150 watt and the 300 watt dimmer. Both do the same thing even though the 300 watt advertises that it works on halogen as well. All connections are in approved boxes and have cover plates over them. This has been inspected by the county and signed off on, minus the resistor obviously... So I'm not concerned about that.

Clarification: The Halogen lamps that come with the transformers clearly state that they are dimmable with a standard incandescent dimmer. The touch dimmers clearly state that they work with incandescent or halogen lights. I am not trying to make an item that's not designed to work with another item. I am simply trying to create a larger load so the "old dimmer design" will work with a much more efficient light.

Update: After researching some more and actually doing my own resistance calculations, I decided to try 5 33KOhm resistors wired in parallel, thus giving me 2.1 calculated watts of dispersed power. And the dimmer works, but only two stages. If I put the 2.1 watts of resistors with the 15 watt bulb, it works with all three stages of dimming. Tomorrow I will go buy more 33KOhm resistors and add another 2 watts of power to the circuit and see if I gain my level 3 brightness, or lack of dimming setting on my dimmer. Wish me luck. Either way, we have progress!

*Update #2 Here is the latest... I put (10) 33KOhm resistors in parallel and added a 1 amp fuse rated for 250V in between the load and the dimmer. It works great for short amounts of time. After 10 minutes, the wires on the resistors would heat up to 250*F, the resistors themselves were only 90*F... I did not trust this in my walls, thus it was removed and replaced with a 3 Watt 120V incandescent bulb that fits in a surface mount socket with a lens cover. The bulb gets to about 120*F but is outside the wall in the air conditioned room. My amp clamp doesn't read the load on the resistors cause it's far less than .1 amps. The total load on the dimmer is .6 amps. My calculated total power on the resistors was 4.3636 Watts, and the total calculated load was 3.6 milliamps. I truly could have spent another week finding a better resistor than what was at radio shack and made this work, but I feel better with the indicator light on the wall plate. Thanks for everyone's help!!!*

An 82 ohm resistor would dissipate about 175 watts; indeed, a 15 watt bulb may dissipate that much power briefly. Something the size of a 15-watt bulb that dissipates 175 watts is going to get very hot, however, and when tungsten gets hot its resistance increases by an order of magnitude. You may have been expecting your 1K resistor to dissipate about 1.5 watts, but in practice it would have dissipated about 17.5 initially. Most resistors don't nicely increase their resistance with temperature the way a lightbulb filament does, however, so your resistor may have continued to dissipate that much power until it melted, whereupon its resistance might have actually decreased, causing it to try to dissipate even more power, until things went downhill very severely.

I would suggest that you might consider a Christmas decoration that's designed for a C7 bulb; such bulbs draw about 1 Watt. If you wanted to use a resistor that drew less power, two 33K resistors half-watt resistors in series would probably be reasonably safe if they were somewhat ventilated (the resistors should dissipate less than 1/8 watt each, but half-watt resistors should be used so that in case one fails shorted the other would be able to handle the 0.44-watt fault power) but might not let through enough power to operate the touch switch (if it does work, keep adding 33K resistors until it doesn't work reliably, and then remove one). The fact that incandescent bulbs have a much lower resistance when cold than when heated allows a much smaller energy-wasting element to be used for a given application than would otherwise be necessary.

@BruceBurkhadt, this answer may reach you tardy, but might be useful for someone else, so here I go; if I missed something, let me know.

Is there a way to put a resistor on the load side of the dimmer to trick the dimmer into thinking there is an incandescent bulb there that I can hide in the box with the dimmer module?

Answer 1:
Yes you theoretically could, but is not adequate - you waste energy for nothing, overheat nearby components, and might be non-compliant to your local code in Texas (this, I don’t know, as I live in Brazil - but would like to know more, just for curiosity).
What I would recommend is: (A) try a Snubber (see the first picture, ahead) with your existing Dimmer; if not enough, (B) maintain a minimum power consumed by an incandescent lamp (not a resistor); a 220V 25W lamp probably will outlast us all, as it will glow orangish.

If so, how much resistance and how do I verify it will handle the voltage?

Most dimmers, either directly-operated or touch-controlled, use Triac for the leading edge control. They work well for resistive loads (voltage and current in phase), with a minimum current to maintain the Triac turned-ON. If the current gets lower than the Holding Current of a particular Triac, it simply turns-OFF. For instance Triac TIC226D, needs Ih > 30mA, while BTA41-600 needs Ih> 70mA.
At V = 120V, a 10W resistor allows I = 83 mA, so that minimum load you found (~10W) might be related to minimum loading current for a specific Triac inside the dimmer.
Answer 2:
In order to have some control, the minimum resistive load should be about 15W~20W, which is twice the minimum holding current of most Triacs, as I clarify ahead.

I decided to try 5 33KOhm resistors wired in parallel, thus giving me 2.1 calculated watts of dispersed power. And the dimmer works, but only two stages. If I put the 2.1 watts of resistors with the 15 watt bulb, it works with all three stages of dimming.

Possible reason for deficiency in control: As soon as the sinusoidal voltage lowers, so does the current. Once it reaches I < I.h, Triac disarms, even for a pure resistive load. So, that initial 10W of consumption might not be enough for full range of operation, aggravated by the resistive-inductive load.
The lack of a Snubber (discussed ahead) probably contributes to a reduced control range and increased minimum load in real life.

Now, let’s see some circuit configurations and their range of control:

The most basic Triac circuit: It has very large hysteresis and does not control over a wide range of phase. It will work even worse for inductive loads too. This is the typical kind of circuit, just for information, extracted from LittelFuse AN1003 . 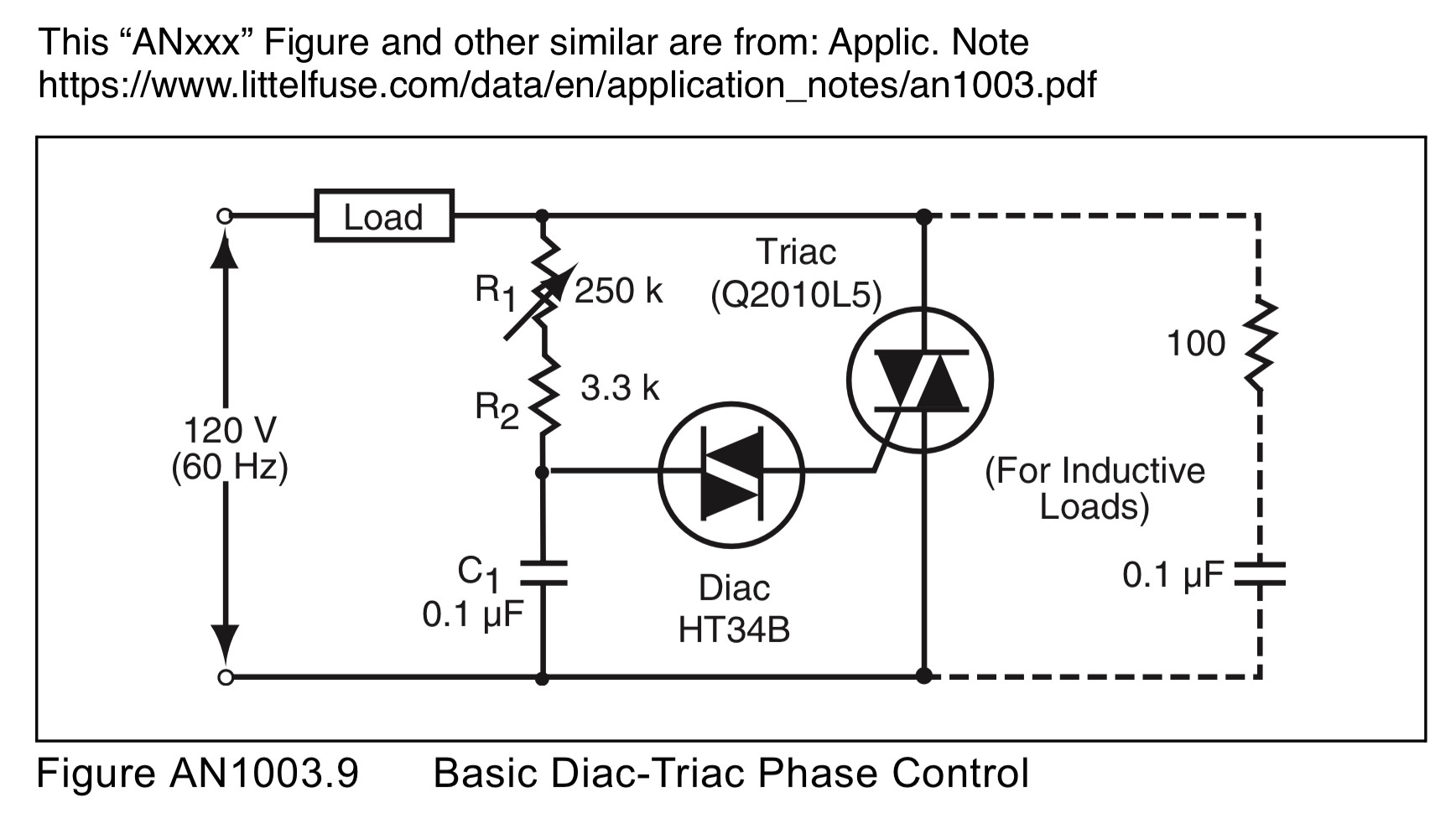 The best thing in this circuit is to show a Snubber circuit made with R= 100R and C= 100nF to help (a little) with inductive loads. Please remind to use a capacitor with Class adequate to connection to mains supply (I guess Class X) and possibly dividing the voltage drop in 2 resistors. Further details, there is AN from ST Electronics is a good reference of Snubbers for Triac applications.

This second circuit is much better, and has wider phase/dimming range, with lower hysteresis. I use it here at home and many quality-made dimmers use similar circuit, some adding a Snubber and even sometimes an RF choke in series with Dimmer's terminals. 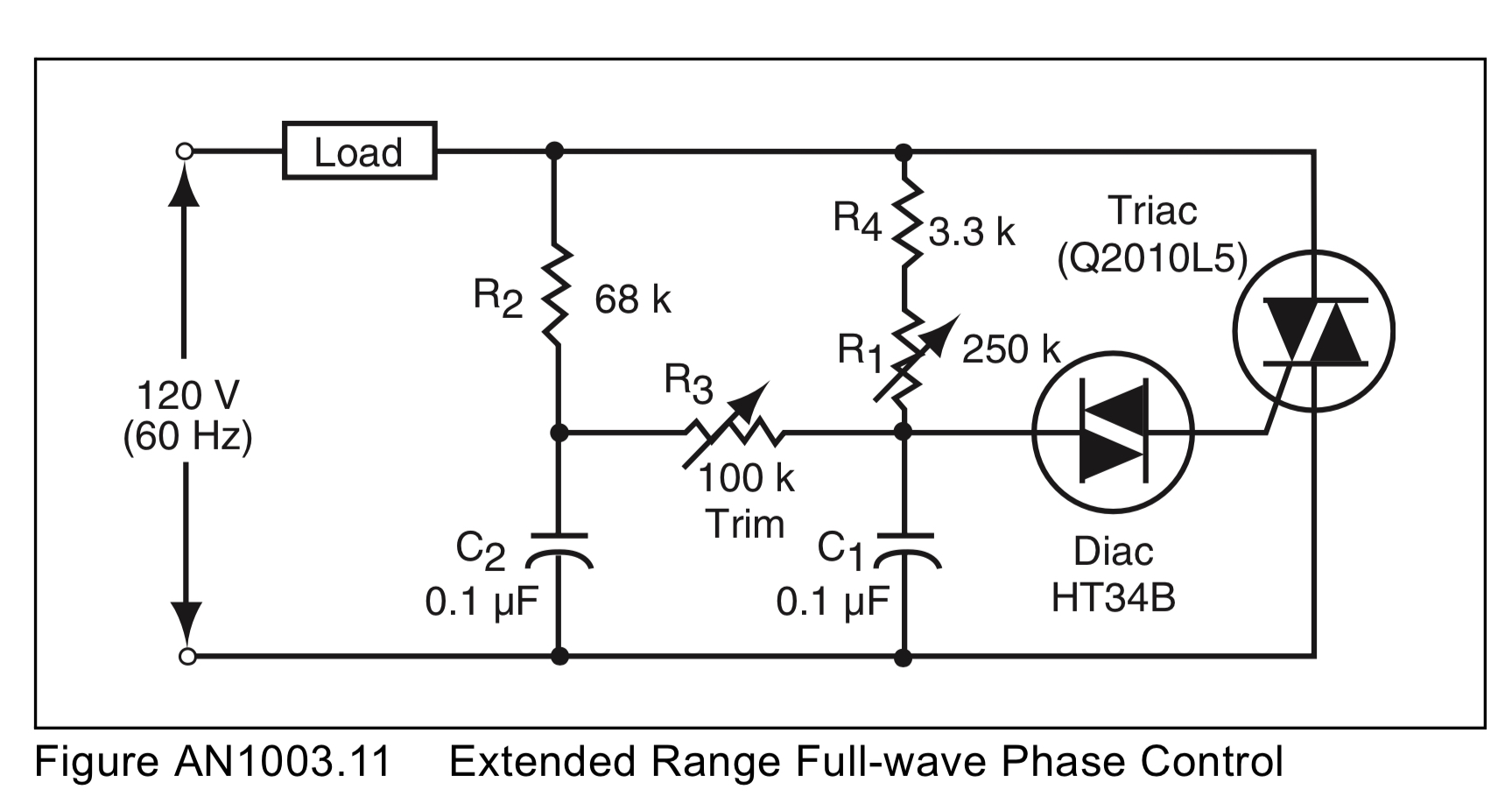 This last one, is better explained in mentioned AN 1003 and is claimed to have a very smooth operation - I simulated it at the end and the results are indeed much nicer, with the widest range! 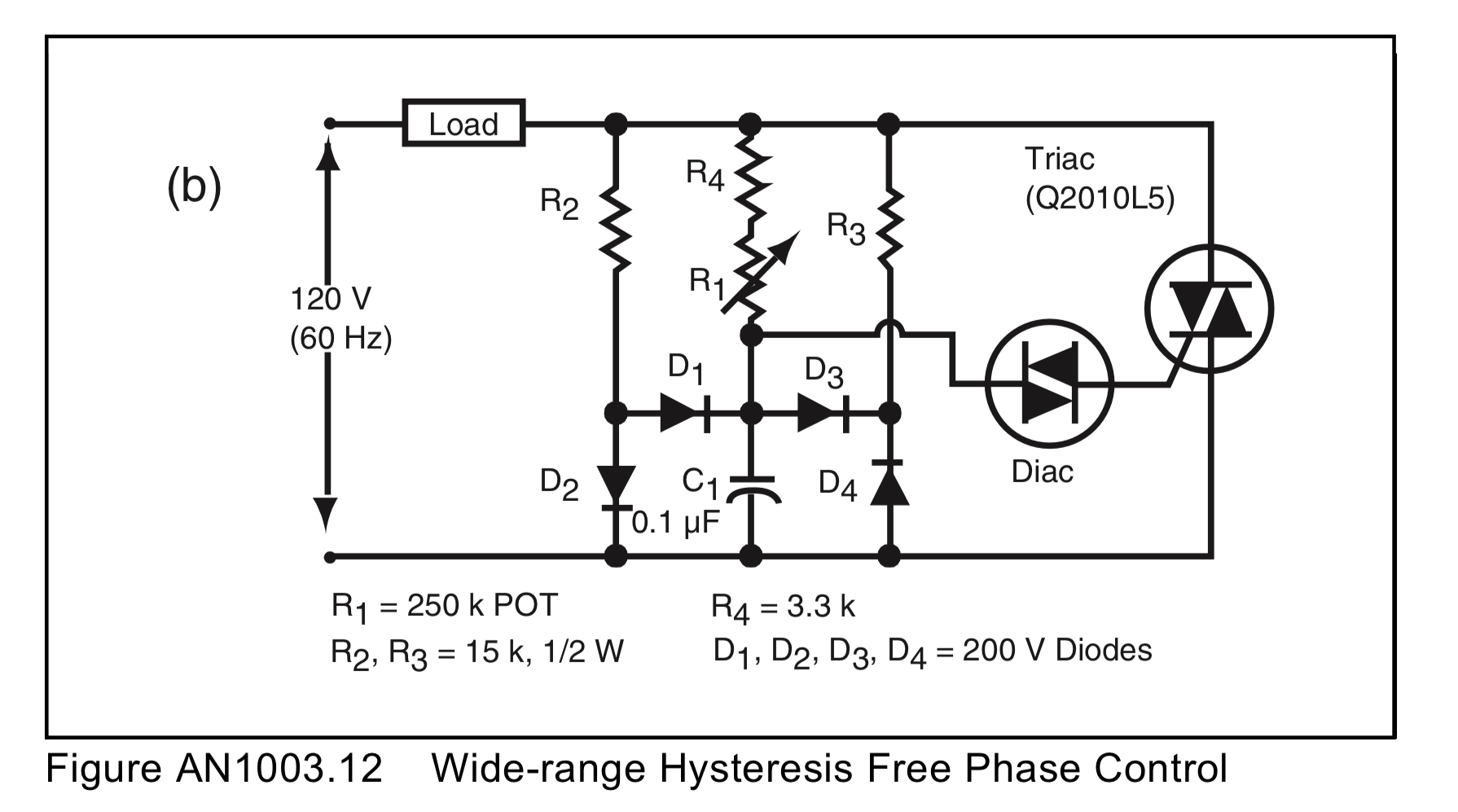 On the first simulation, I installed a Switch that replicates the Original circuit (Single Trigger), or created a Burst of Multiple trigger pulses to the Triac. For that, I made a modification to feed the first RC from the Line, before the Lamp+Inductor.
I tried to replicate at least the behavior of a circuit I read in a forgotten magazine about 20~30 years ago, but could not retrieve it. I did not built it, and a comprehensive review should be detailed as power dissipation on resistors and potentiometer, etc.
Here are the results for different Potentiometer positions: 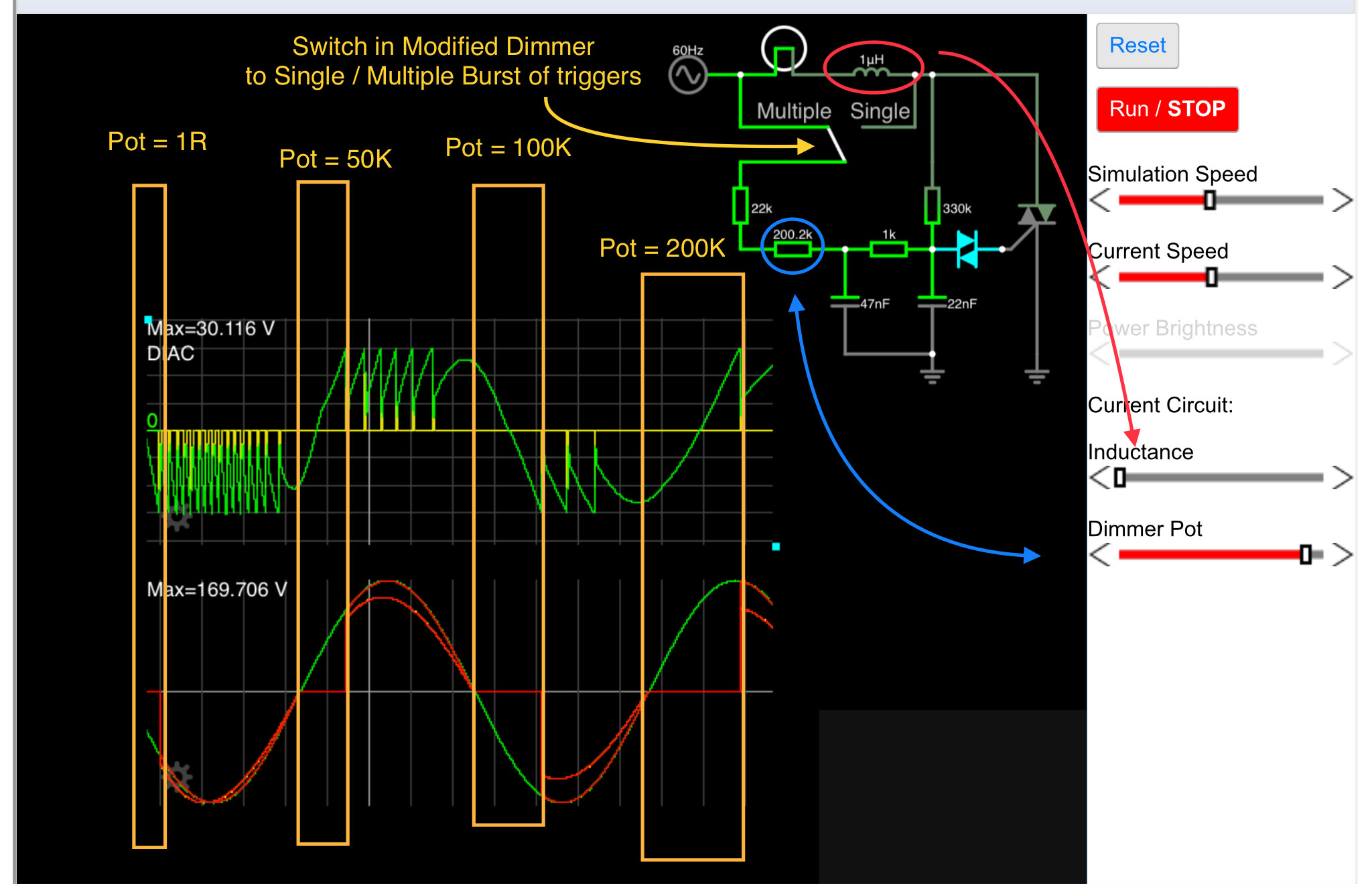 The second simulation compares the behavior of the Hysteresis-Free Triac-based dimmer.
The following picture shows the waveforms at minimum (Pot.min) and maximum (Pot.max) adjustments: 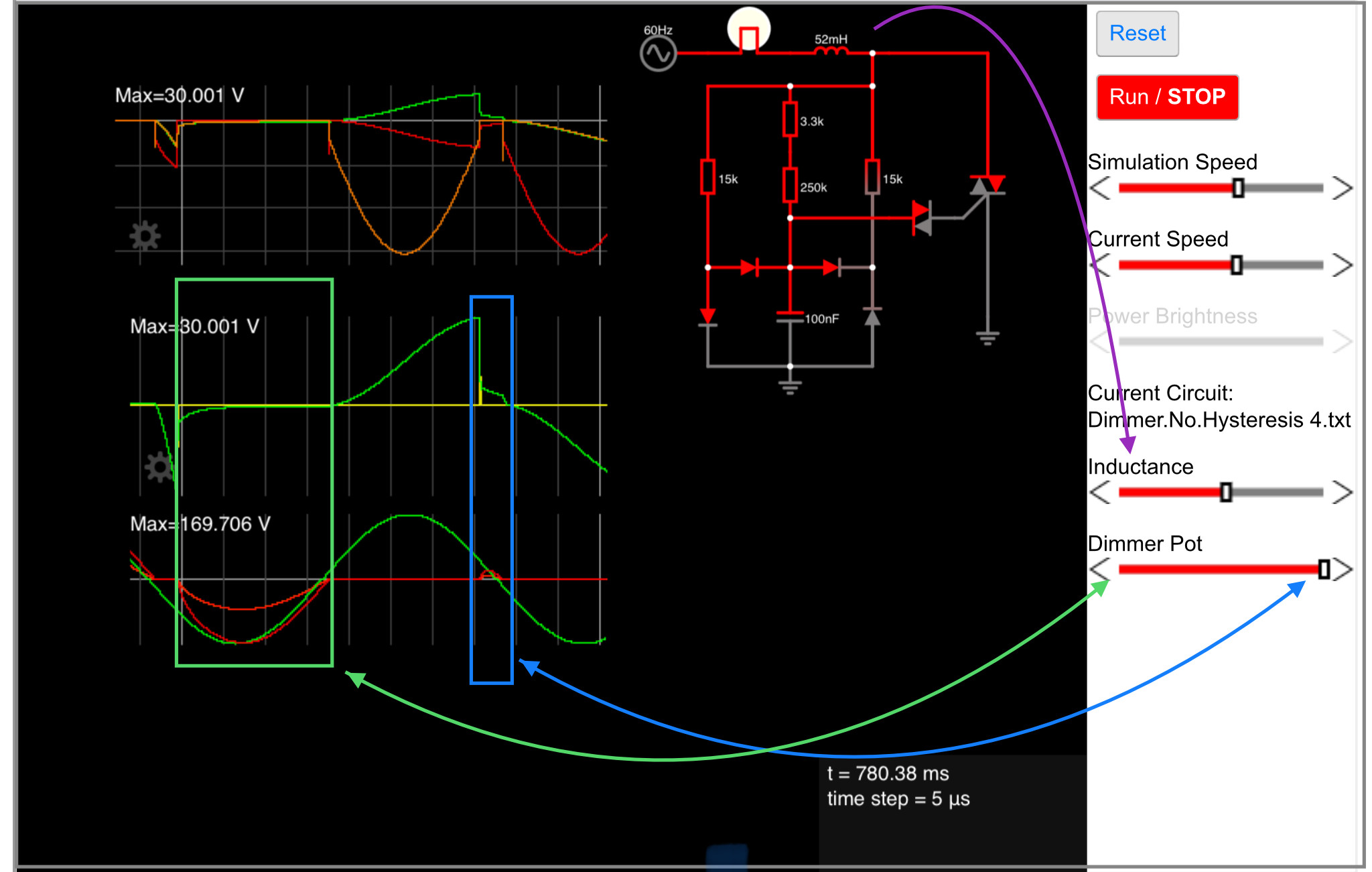 Not the answer you're looking for? Browse other questions tagged resistors dimmer incandescent halogen or ask your own question.