All you have to remember, is that current flows through a diode in the direction of the arrow.

In the case of the OR gate, if there is no potential (i.e. logic 0, or ground) on both inputs, no current will pass through either diode, and the pull-down resistor R\$_{L}\$ will keep the output at ground (logic 0).

If either of the inputs has a positive (logic 1) voltage on its input (In 1 or 2), then current will pass through the diode(s) and appear on the output Out, less the forward voltage of the diode (aka diode drop).

The AND gate looks more challenging because of the reversed diodes, but its not.

If either input (In 1 or In 2) is at ground potential (logic 0), then due to the higher potential on the anode side due to the positive voltage from resistor R\$_{L}\$, current will flow through the diode(s) and the voltage on the output Out will be equal to the forward voltage of the diode, 0.7v.

If both inputs to the AND gate are high (logic 1), then no current will pass through either diode, and the positive voltage through R\$_{L}\$ will appear on the output Out.

As an aside, diode logic by itself is not very practical. As noted in the description of the OR gate for example, the voltage on the Out terminal when there is a logic high (1) on either of the inputs will be the voltage on the input minus a diode drop. This voltage drop cannot be recovered using just passive circuits, so this severely limits the number of gates that can be cascaded.

With diode logic, it is also difficult to build any gates other than AND and OR. NOT gates are not possible.

So enter DTL (diode transistor logic), which adds an NPN transistor to the output of the gates described above. This turns them into NAND and NOR gates, either of which can be used to create any other kind of logic function.

You can understand easily understand logic circuits made from diodes by considering ideal model of a diode in which we ignore 0.6-0.7v in-built forward voltage drop of a diode, any bulk resistance and non-idealities. So basically we consider ideal diode as a perfect switch: it is closed when forward biased and open when reverse biased

Using this model, lets calculate current I through through resistor

Whenever atleast one of the two inputs is held to high (Es), a non-zero current flows towards the ground through the resistor as respective diode is forward biased and acts as short circuit. As voltage drop across a diode acting as a short circuit is 0, therefore terminal Out is held to input high (Es). When both inputs are held to ground (0v), both diodes are reverse biased and hence open circuited and no current flows through resistor. As a result, terminal Out is now held to ground (0v)

Whenever atleast one of the two input terminals is held to ground (0v), their respective diode is forward biased and acts as short circuit causing non-zero current to flow through the resistor. As voltage drop across a diode acting as a short circuit is 0, therefore terminal Out is held to ground (0v). When both inputs are held high (Es), now both diodes are reverse biased and thus act as open circuits and no current flows through the resistor. As a result, terminal Out is now pulled to high (Es)

I can explain with the OR gate. The pull down resistor sets the output to 0 V, but through a relatively high impedance.

A diode can be thought of simply as a switch, if there is a positive voltage across it (where "positive" can be interpreted as more than the turn on voltage) then it is low impedance. If there is a negative voltage, there is a high impedance.

Now, look at the OR gate. If IN1 and IN2 are both low, then both the diodes are OFF (i.e. they are high impedance). So, the pulldown resistor dominates and the output is zero.

If IN1 is high, for instance, then the diode turns on and IN1 fights with the pulldown resistor. However, if IN1 has low output impedance (which it should) then it will win the tug-of-war and the output will go to IN1, or HIGH. The same argument holds if IN2 or both IN1 and IN2 are high.

Keep in mind, the diagram as drawn implies IN1 and IN2 = Es. 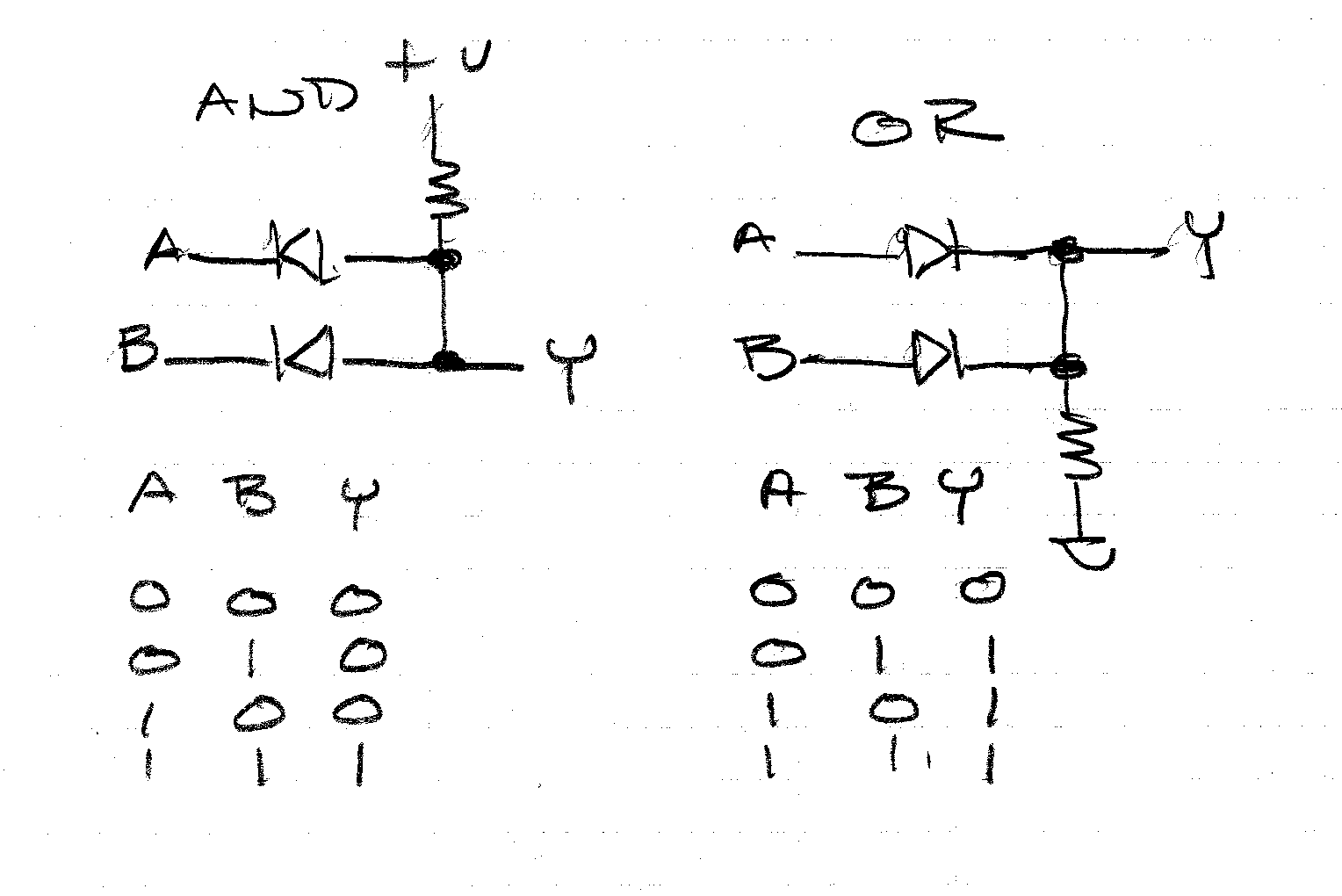 Not the answer you're looking for? Browse other questions tagged circuit-analysis logic-gates or ask your own question.

1
Logic gates and logic circuits
0
Implementing logic functions using universal gates
0
Logic Gates - Did I connect them correctly?
0
Weird logic gates
3
How to implement a function using just NAND or NOR logic gates
0
what to do to prototype with logic gates?
1
Diode circuit analysis solution
8
Is is possible to create modular logic gates from transistors for teaching purposes?