What battery to choose with motors?

I am trying to figure out how many batteries I will need, in order to power my 4-wheeled robot (based on an Arduino). I understand that it is not practical to power the Arduino and the wheels with only one 7.4 V LiPO battery. So I know that the Arduino power source is going to have to be different than the motor power source.

The specs for the motor are:

I need to have all four motors run for at least one hour. So the question is: Can all four motors be safely powered by one 7.4V LiPO battery, or am I going to have to have one battery for two motors?

The batteries that I have are 2200mAh, 1C continuous discharge.

The answer to this questions is quite complex, but let's try to simplify it by making some assumptions and generalisations.

Now, some of these assumptions will be more true than others, for example the last one, is quite ridiculous to a mechatronic engineer, but I feel this is not the time to start with differential and integral calculus, so we're making a triangle. It's easier and "close enough", especially since all those other assumptions are shots in the dark without some test data. So be aware, that the final estimation is going to be off and that you should do some tests with the finished robot to see by how much.

Now, we have an average movement to calculate the energy profile of, 30seconds, of which the last 27seconds are continuous movement with fixed current (the 3second start up is different). For those first three seconds a "triangle" is added to the flat curve of the other 27 seconds, which has its peak at time t = 0s, with 3.6A and its base at the level current of 1.2A (1/3 of the stall current as assumed). So its height is 2.4A and it's width is 3 seconds. This is a bit weird way to give measurements, but it'll work out, I promise.

Now, there's four motors, continuously running at the average current over the span of an hour, as we assumed up front. If you already know that it will only be running the motors about 75% of the time, you can start with a battery capacity of 75% of the answer. And so on with any other, but they will have to be able to handle a continuous current higher than their capacity (C). For example, is the battery is only 50% the capacity, the continuous current will be 2C for that battery. This is why I just made the assumption of continuous running, because you will need that capacity with a 1C capable battery anyway.

And as such a minimum capacity of 6.6Ah. Or, three 2200mAh cells in parallel.

Now, if you put them parallel, please make sure you first balance them together with resistors for a while, like so: 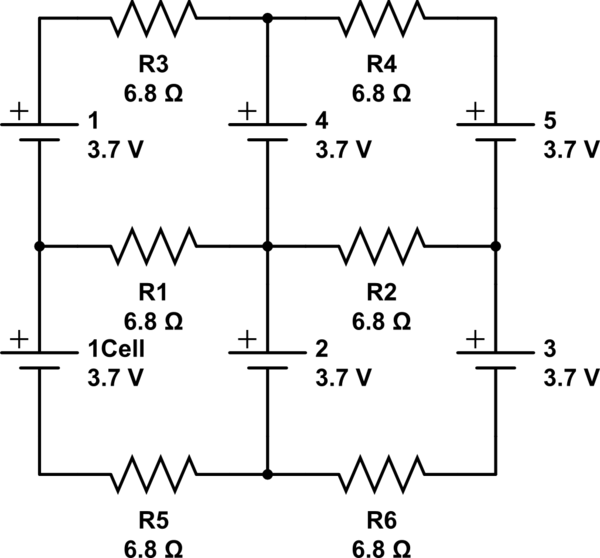 In this drawing I am assuming you have ready-made packs that you don't want to take apart, but that do have a balancing wire. If there's no balancing wire: Take them apart and rebuild them! (Be careful not to damage cells! That will cause serious problems with potential bodily harm.) It's the only safe way! So you can use the above drawing with the balance wires. Then, when you've let that balance the cells through the resistors for several hours, connect the packs in parallel through the balancing wires, to get a pack like this: 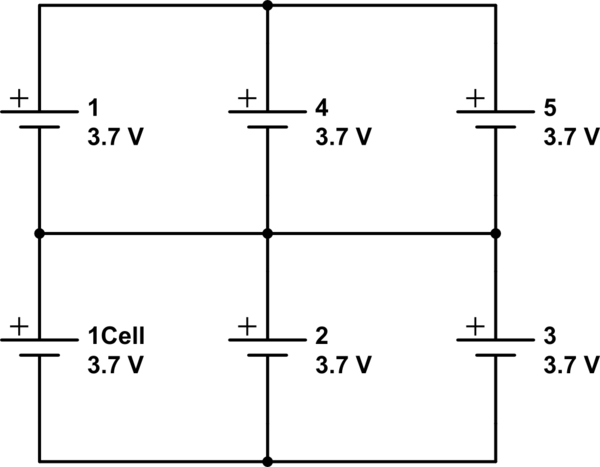 Then solder them together without the resistors per group of parallel batteries, put them in series, add a balancing wire to the middle point of the finished pack.

Now, here's a very important thing to do: Make sure you have a way to balance-charge the finished pack! If you don't the lifetime of your batteries will be halved or worse! So after you have built the new pack, use a balance charger to fully charge both the cell stages before you start using it, or one of the two stages may get damaged very soon.

EDIT1: Another very important thing I forgot to mention just now, which I thought of when commenting above, is that you NEED to protect the batteries in your robot.

The batteries cannot handle the stall current of your motors, maybe the motors will get too hot as well, so when there's a stall current for more than 3 to 5 seconds, the robot might be stuck and you need to shut off power to the motors!

You can do this with your Arduino and a current sensing resistor, or you can put an independent limiting switch inside your battery pack. If you like reading and doing the exercise, this answer I gave last night could give you some inspiration (blatant advertising of 6 hours of work! ;-) ). Scroll down to Edit1 there.

With an extra two transistors you can replace the reset button by an I/O from the Arduino. But if you involve the Arduino, a current sensor and a bit of programming is much easier.

4
1 Regulator for 4 motors or 4 regulators?, connecting 3-5V dc motor to arduino
0
How to estimate motor current under load
1
When to use multiple batteries vs a UBEC
0
How to choose the suitable battery for 6 stepper motors?
0
Battery selection for a robot
0
Powering Motors in War Robot
0
Reduce 8.4 volts to 6 volts
1
How to power two motor drivers and Raspberry Pi with one LiPo battery?