Is it possible to step-up the output of a laptop USB port to 12 watts?

I've got a USB device that requires 12 watts to charge.

My laptop appears to output less that that.

My question is: Is it possible to step-up the output of a laptop USB port to 12 watts?

No. This is basic physics. There is no free lunch (or energy).

If the laptop only puts out 500 mA at 5 V, for example, then you get 2.5 W. You could convert this to a different combination of voltage and current, but the result can't on average exceed the 2.5 W you put in (It is possible to get higher power out for short durations, but that's clearly not what you are asking about. The average out still can't exceed the average in.). Since no conversion will be 100% efficient, you will actually get a little less power out, with the remainder getting dissipated as heat in the converter.

As a practical thing, no, you cannot. Any device that you could build to do the job would cost more than it is worth - just get a separate charger.

This is in fact done all the time in charging a battery. You charge the battery with a low current (low power) and the battery can later deliver a much higher current (more power.)

So, you could charge a large capacitor from your USB port until it reaches (very nearly) 5Volts. Then, you would let the device charge itself from the capacitor.
The capacitor charges slowly through the USB port (drawing only 2.5 watts, but for a relatively long time.) When you then connect the charger to the capacitor, it can then discharge much faster (delivering more power, but for a very short time.)

Switch back and forth (allowing propert amounts of time for the charge and discharge cycles) and you could deliver enough energy to charge your device - but it would take at least (12/2.5=4.8) 5 times longer to charge than usual.

I doubt that your charger would like pulses, and I doubt that it would be worth your while to find out - a 1F capacitor costs over 50US dollars. Still, it could be done if there were some really serious need to do it.

The USB 3.0 spec allows a special battery charging mode that increases the output to 1.5 A, while not allowing data transfer during that time. With this option, you could use a USB Y-adapter to connect to 2 separate USB ports. As long as your device is capable of making the request, this could supply up to 15W total.

The USB 3.1 spec adds power profiles allowing up to 5A across 12V or 20V, giving you significantly more than what you need. However this is a fairly new spec, and not all devices will support these power profiles.

As a concise answer, no. A USB port that sticks to USB specs of 500mA output max provides 5V * 0.5A = 2.5 Watts. With real world efficency losses (nominally 80~90% efficent), you can provide a Higher Voltage with Less Current, or a Lower Voltage with More Current, but you can't create powerout of nowhere. The output power will always be less than the input power (unless we talk about theoretically perfect systems, then the output will be equal to input power).

That said, many USB ports don't adhear to a strict 500mA output. 12W is roughly 2.35A at 5V, so basically a Tablet charger. Apple computers, with special drivers for the iphone and ipad, will provide that, for the ipad, but that is not to USB spec. Other computers vary.

While I agree with pretty much everything Olin has said, in this particular case he may not be entirely correct.

I finally went and checked Wikipedia because I had a vague memory that USB3 might be able to deliver higher power; check out the claimed power delivery capabilities of 3.0 and 3.1 in the last para of each.

Since most of the laptops comes with more USB ports, you may get it with a Y cable like this: 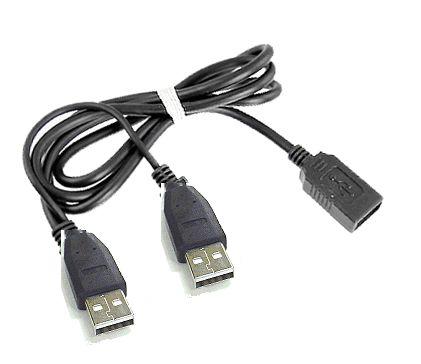 This doesn't allow a single port to increase its output power, but allows you to split it over two of them.

I guess that you may also use more cables to distribute the power over more ports, although I'm not sure to recommend that.

Not the answer you're looking for? Browse other questions tagged usb watts or ask your own question.

2
Can you charge a battery to run a device at 5V from the USB port?
5
Is it safe, or even possible, to draw more power from a USB port than it was designed to provide
1
Diagnose USB port damage
39
How does a USB C port provide the power to charge laptops?
2
Is it Possible to Limit USB Port Current With a Resistor?
0
How does USB port on a power strip detect the optimal current output?
0
When is USB port power control important