This is a long story for which I hope my proposed solution to a problem I've created will be a stable one. But op amps can surprise you, so let me explain. The circuit is large and complex, so I'd like to avoid posting it in favor of discussing the key issue I'm focusing on.

I have a circuit that uses several low voltage rail-rail op amps for some audio processing, and it is powered by an isolated single ended 9VDC supply, and further reduced to 5VDC with a standard 7805 regulator. Now I'm in that habit of always using a spare op amp in a unity gain buffer config to develop a virtual ground, using a pair of matched resistors and a bypass cap on the + input. I'll usually put a cap on the output too. And in cases like this where the supply is isolated, I will also connect that virtual ground to the ground pins of all input or output jacks to and from the device. This means no ac coupling caps are really needed on the signal input or output pins, though I'll usually add some small resistance on all I/O points to help protect the op amps. Anyway, I've been doing this for years and have had good results with acceptably low noise. And since the circuit already has an on-board 5VDC regulator, I added an "AUX 5VDC output" on a "pin" jack, so that it could power a companion "future" device.

Well it wasn't long before I decided I did need such a companion device in a separate box. Kind of an add-on "adapter" product. And I would like to use that "AUX 5VDC output" on device #1 to power my companion device. This second device also uses the same low voltage OP amps as #device 1. So the second device will also need a virtual 1/2V ground too. If the audio signal from the second device is always connected to the first device with a standard audio cable, then I already have a virtual ground coming in through the ground wire of that audio cable, and I won't even need a second "spare OP amp" V-ground in device #2. Maybe just an extra capacitor. But, I also want the second device to be able to work independently, with NO audio cable connection to the first device at all. And for that to work, device #2 must have its own independent virtual ground. I guess I could just use voltage divider and a capacitor, but I'd rather do it with a spare op-amp, as I did in device #1.

But can you see the problem I've created for myself? If device #2 has its own 1/2V virtual ground, and its running off the same supply as device #1, there is going to be a conflict if these two devices are connected together with an audio cable! Unless the two virtual grounds are absolutely identical 2.500000000... VDC, then there will be unwanted current flowing between the two virtual grounds. At the very least, I'd expect that to add noise. At worst, it could cause some strange instability.

So one solution I'm considering is to use a circuit like this one, for the virtual ground in device #2... 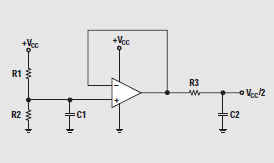 This circuit is nearly identical to the virtual ground circuit I'm using in device #1, but this time I've added a resistor to the op-amp. That resistor might only be about 50 ohms. Now if the two virtual grounds meet, and there is a small fractional DC difference between the two I'm hoping it will quietly be dissipated through that 50 ohm resistor. The virtual ground from device #1 will actually "prevail" as the dominant V-ground in that case. Then if device #1 is disconnected from the audio chain, device #2 can be used independently, because it will still have something very close (within 50 ohms) of true virtual ground.

Now this all seems to work well on the bench, but does anyone see any potential "gotchas" here? Its hard to really know for sure. Both devices will have to have their audio I/O connected to a wide variety of equipment used by musicians (effects pedals, PA console mixers, etc), so its impossible test every case. If you do see some gotchas and have some remedies, please consider that device #1 is already committed to what turned out to be an expensive prototype 4-layer PC layout, and prototypes have already been constructed. It would therefore be best is any remedies could be confined to device #2, as its just in the breadboard SCAD stage. :-)

Thanks for any thoughts.

What if you use your second (or indeed first, or indeed any of all the other devices) with a device made by someone thinking the same as you with a shared supply in some larger encompassing device? Call the person and ask if the one ground is the same as the other ground? i.e. Is signal ground the same level as power ground?

I can tell you, in "cheap" designs many do it the same way as you, but often use the full power input to divide. So you are going to compete. Violently, if their reference is 12V/2.

If you want to make a good design that's universally compatible, you make sure that the external grounds are all actually the same hardwired level. So if you output a +5V and a 0V only, that 0V should be the same as the 0V on all the audio plugs. That's a good design.

So in this set-up, what would have been better is to output your original 5VDC as a +/- 2.5VDC balanced around your 'weak' virtual ground in a three pin plug. Then suddenly you have a balanced power supply to your second box and you could even devise a system where if the middle pin is not lifted to half VCC, then you make it yourself if needed. Or for separate use make a second DC plug with a switch built in that activates the divider and disconnects the 5VDC lines (for safety).

Want to use a divided VCC as a virtual ground with an external DC adapter and stay safe and compatible to "shared power situations"? One of two options:

If you go down the rabbit hole of "Oh, I'll just assume it's only a 0.1V difference", in six months you'll be kicking yourself, because you have a 9VDC system with a 4.5V virtual ground, etc.

Not the answer you're looking for? Browse other questions tagged operational-amplifier audio analog grounding or ask your own question.