Voltages with an earth ground 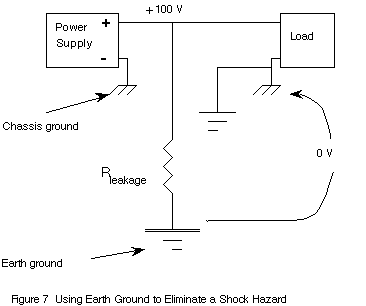 The idea is that the power supply has a very high voltage output. So this diagram says "if you are afraid stupid people will come near, use a dirty trick":

Assuming we live in a world where everything always works in real life as it does on paper. This practise is largely abandoned for several very good reasons, the simplest of which is the universal rule: "You cannot rely on what you did not install yourself". Another major, but simple one is: People, that can be grounded through some point of touch, may invalidly assume they can touch the wire, because they are only touching one. The famous "one hand in the pocket" rule will not be enough any more to save people from nasty shocks, so in stead of preventing them, you are inviting them.

In my opinion a much better way of avoiding electric shock is to install the system with two good and insulated wires, as is mandatory in many parts of the world, and just not invite stupid people who like chewing on unknown wires near those wires.