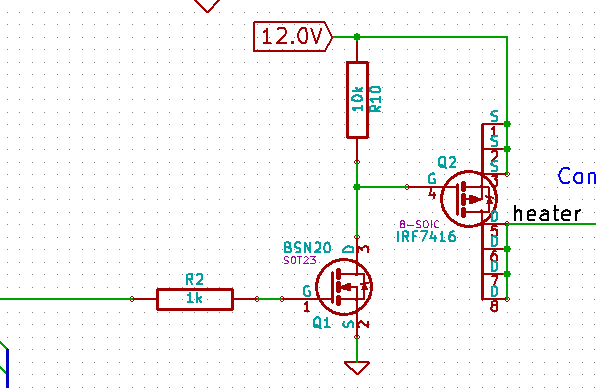 This is a part of a project in which the line into R2 comes from the PWM of an ATtiny88 (datasheet).

The R2 is set as an output from the ATtiny88, at first the heater line was High all the time when R2 was toggled (PWM).

When attempting to debug the hardware I found that if I placed flux or isopropyl alcohol across the line to R2 (from the ATtiny88) to ground, the heater line would toggle as expected (it took longer than it sounds to come to this conclusion).

In further research I found this webpage which indicated I may need a resistor to help pull down the gate pin of BSN20. At the time I only had a diode so I placed it with the "flat" side to the gate and the "triangle" side to ground and it made it work.

My three questions are:

In the long run I'd like to turn my DIY prototype into a produced circuit board. I have a computer science background not EE and would like to know what's going on and where I made my mistakes so that I can produce a valid design.

With more time to debug, i found one more variable. the voltage on the ground line in relation to the LDO regulator and at the leg of the source pin of BSN20 is reading 7.3mV. The voltage at several points across the ground trace showed different values. So one finial question. This seems to be either bad board design and/or more-likely a flux and other dirt under some of the chips acting like resistors pulling up the ground line. So...

3). Yes, and you shouldn't use a diode, you should use a resistor and it should be something way less than a megohm in order to keep Q1's output transitions crispy. Depending on the MCU's supply voltage, 10k to 100k might be OK.

Not the answer you're looking for? Browse other questions tagged microcontroller power mosfet ground or ask your own question.