What is Frequency in electronics?

This has been floating in my mind for a while, everything has a frequency. Like a dc-dc converter, my scope is 100 MHz(i know that's a bandwidth but it has the unit of frequency). I understand that an Astable 555 has a frequency which is the mark and space time based on the values of the cap and resistors. And then you have the use of band-pass filter which can filter different frequencies so what is this all about? How does a direct current have a frequency? And the relationship between bandwidth and frequency as they have the same units.

Frequency is the inverse of time for repeating events. If a single cycle of your mains is 1/50 of a second in duration (0.02 seconds), then there will be 50 cycles in a second (1 / 0.02). We say the frequency is 50 Hz.
The unit for frequency is the Hertz (Hz). 1 Hz is equal to 1 cycle per second, an older name for it (cps). It's a convenient unit, even for very short cycles we use, with a prefix: MHz, GHz. For longer cycles (near or longer than 1 Hz) we sometimes use the minute as unit: a heart rate of 70 beats per minute (BPM), a metronome setting of 100 BPM.
Still longer cycles are often expressed as a period of time (1 / frequency).

Every system has its typical (range of) frequencies. A heartbeat will be around 1-2 Hz, and the resonance frequency of a trampoline is also in the order of 1 Hz. Radio waves have a broad range of frequencies: 30 kHz (for a corresponding wavelength of 10 km) is VLF (very low frequency), while the magnetron of a microwave oven "transmits" at 2.45 GHz. And while 30 kHz is low for radio, it's already well beyond what we acoustically can perceive.

A higher frequency (top track in the picture) of a signal will be shown on an oscilloscope as a faster repetition than a lower frequency (bottom track). 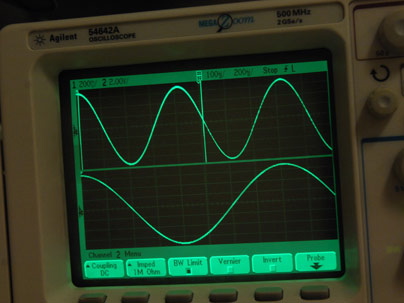 "Direct current" (DC) as a constant voltage has a frequency of 0 Hz.

Bandwidth indicates a range of frequencies, going from the lower limit to the higher. If your scope can handle signals from DC (0 Hz) up to 100 MHz, its bandwidth is 100 MHz - 0 Hz = 100 MHz.

Frequency, in the generic sense, is the rate at which something repeats. Usually measured in "repetitions per second", or Hertz (Hz). My watch ticks at 1 Hz. I water my lawn at a rate of 0.00000386 Hz. And my car blinkers blink at about 0.5 Hz. That's it! Of course things get a little more complex when you consider what exactly is repeating. But "frequency" really is that simple.

A scope, or band pass filter, is usually rated in Hz and refers to the frequency of a signal that can (or can't) go through it. In this context, it is talking about a sine wave.

Something like a 555, or other clock signal type circuit, is talking about how often the signal switches.

Bandwidth and frequency do have a relationship-- in much the way that a car and a baseball are related (they are both measured in miles per hour).

As it stated in above answer the frequency is the measure for repetition of an event. As you asked more than one questions about frequency, let me describe what it means in different contexts.

In this case, frequency is the number of positive (or negative) peaks in the signal in one second. Sine wave is an example of the waves associated with AC power supply. So, an AC supply with 60Hz frequency means that the sine wave of its voltage repeats itself 60 times per second. A DC signal (it does not change over time) is said to have frequency of 0 Hz.

An (electronic) filter is a device which literally "filters" frequencies. For example if a filter says it is a low pass filter (LPF) with cutoff freq of 1KHz, it means that any sine-wave coming at its input will reach the output if and only if it has frequency less than 1 KHz. So if we pass a square wave of 10Hz through this LPF, at the output we will only see the harmonics of square-wave which are less than 1000hz (100 harmonics).

If we do not include all (infinite for square wave) the harmonics (sine waves) and add them together with fundamental frequency sine-wave, we will not get a square wave. But, the resulting wave would be an approximation of square-wave. So, producing an accurate square wave of any frequency is practically impossible.

Let us go back to the filter again. We just saw what an LPF does. there are other type of filters; high pass filter (HPF), band pass filter (BPF) and many more. Let us think about BPF. A BPF has a property that it allows only the frequencies (sine-waves) which are in a fixed range of values. A BPF with cutoff frequencies 100Hz and 5KHz, will pass only the frequencies in that range -i.e. band. So we can say that "bandwidth" of our filter is (5000 - 100 = 4900 Hz. Even an LPF can have bandwidth which is equal to cutoff frequency itself.

Bandwidth is a term used in lot more context other than filters. A more general and loose explanation is how fast a device can work (so if that device is a filter what is the upper cutoff of that filter, assuming we do not care about the lower cutoff).

I know you did not ask for this, but this is a right place to cover this topic also. What does it mean when you say I have a 3 GHz computer?

A computer has a CPU which performs all mathematical and logical operations using digital circuits. Each operation in CPU is divided into one or more instructions. These instructions are then processed into multiple stages. each stage in instruction processing takes some time and the stage that takes maximum time decides the frequency of CPU. so if a CPU stage that takes maximum time = 1ns (nano second = 0.000000001 second), then then we can run that CPU at 1GHz (1 / 1ns). This is a very basic explanation of a very complex concept, so it is not too accurate and differs across different CPUs.

We're living in a sea of molecules and atoms etc, when a transmitter antenna creates a frequency wave, it actually does sth like a whiplash (simply put, NOT TECHNICALLY) to this sea of atoms and molecules, like a wave, and when we talk about frequency in a circuit, a wire, with electrical characteristics, we usually mean an Alternative Current, AC, as the name indicate, it alternates between positive and negative thus creating a sine wave and can be called a frequency.

Not much difference though with the TX transmission, when you generally look at them.

Imagine when a transmitter wants to send a signal, it sends a waving whiplash whether omni-directional or fan shape, it penetrates everything except ferrous materials, which redirect or reflect it depending on the material or the frequency.
Imagine again the whiplash, if you move your hands repeatedly and quickly you create a high frequency, and if you move it slowly, a low frequency.
Look at the whiplash, a quick move has shorter range, and a slow move has a longer range.

Not the answer you're looking for? Browse other questions tagged frequency or ask your own question.

6
What is the difference between clock and pulse?