How can I generate a sinusoidal voltage and current waveform using half-bridge or full bridge inverter?

I know how a half bridge and full bridge circuit looks like. What I don't understand (and I simulated it) is that whenever I drive the switches using a pulse generator I get a square wave as an output. I am not filtering it.

So my question is: Can I get a sinusoidal voltage waveform and a sinusoidal current waveform using sinusoidal PWM (so dutycycle of PWM varies constantly in order to change the average DC value to create a sinusoidal waveform)?

Start here to get a general idea - Many many ideas here

The high:low ratio of the PWM over 1 PWM cycle sets the analog value represented after filtering. The PWM ratio is adjusted accordingly. But how to do so ...

The comparator compares linear ramp & sine wave magnitudes - and toggles the output according to the result.

I expect you to now run from the room crying "Eureka". 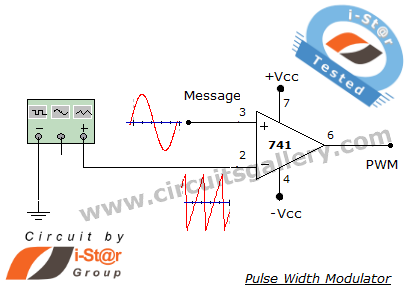 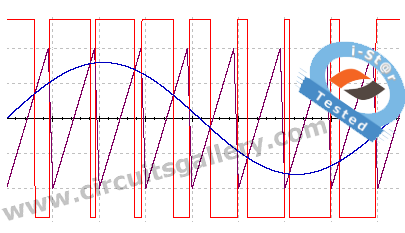 Note that one diagram above uses a triangle wave and the other a sawtooth (ramp up, vertical down). Look at what they both do and how the method works. Once you understand what is being done you can "easily enough" convert it into software. The "ramp" in both cases starts at zero and progresses to Vmax over a period of time. With an analog comparator you continually compare the sine wave with the ramp and set the output high when the ramp is lower than the sinewave and low when the ramp is higher. In software the comparison is done at regular time steps

The overall ramp frequency needs to be higher than the sine wave frequency. The more ramps per sinewave cycle the more often the waveform will switch and the higher the PWM frequency and the more losses in MOSFETS or IGBTs etc. But, lower ramps per sinewave lead to a worse approximation of the sine wav when the PWM is filtered. Some systems change the number of samples per sinewave depending on the frequency to limit maximum PWM rate. As sinewave frequency gets higher they will occasionally reduce the ratio. When such systems drive a motor you can hear them "gear changing" a the motor accelerates. Starter from stationary the inverter PWM can be heard as a low frequency tone which rise towards a whistle as the motor speed rises, then suddenly drops by a factor of maybe 4 or 8 or ... and then rises again as the motor continue to accelerate. It may do this several times. This allows the purest possible sine wave at slow speeds and limits drive frequency components at high speeds.

Note that you need model this for only a quarter cycle in software. For the second quadrant you just run the comparison backwards to quadrant one, for Q3 you invert Q1 (highs and lows swapped) and for Q4 you invert Q2. The sinewave values may be calculated on the fly or stored in a table depending on what suits your system. If you have lots of ROM/memory room it may be easier to use a whole 360 degrees in memory but using 1/4 cycle 4 times is not much harder.
So, if using a table:

Which reminds me of an old old joke*.

(In some case, trying to go up a chimney up may work after a fashion if you try hard enough but may lead to disaster but down a chimney up always ends in disaster. )

Well what you are talking about with the duty cycle is similar to the way Class-D audio amplifiers work. But just to clarify, even though the amplified frequency might be only 60 Hz, the square wave (whose duty cycle is being modified) might be over 100Khz. As a result, a tiny amount of capacitance inductance (usually in the speaker itself, in the case of an amplifier) turns the output into a very nice sine wave. A similar strategy I've seen developed for power inverters involves a digital control system or MCU that over the span of a 60 hz cycle time, reads a series of 1's and 0s from a lookup table from memory. Again, the number of lookups must be much greater then the cycle time, but in this case maybe only 100 divisions will yield excellent results. The sequence stored in memory, in that case, are called "magic numbers", and I first saw this methodology developed by Don Lancaster, who used to write for some electronics magazines... wow.. I think like 4 decades ago? But he still runs a web site called http://www.tinaja.com, or you can look up Don Lancaster in a google search, with the string "magic numbers". He probably has all the magic number data available and pre-calculated, though I'm sure he will want some kind of fee.

The other option is to just "approximate" a sine wave. Many home "UPS" systems will switch between a few taps on the output transformer, to provide a few "steps" along what would otherwise be a square wave. Though the steps are still not as pretty as a sine wave on a scope, they still have a much lower harmonic content than a straight up square wave, and so are much kinder to equipment that is powered from the circuit.

Hope some of this helps.

An H-bridge can produce thee (useful) output states, call them high, low, and zero. Some calculus will show that the most sinusoidal wave with those three states is very close to this

which is 14 periods with 5 high, 5 low, and 4 zero. Many inductive and capacitive loads, like a transformer, will make that waveform even more sinusoidal. Resistive loads like a heater or incandescent light won't care.

0
How does a true sinewave inverter work?
2
How sinewave pwm inverter filter output?
0
Amplification of sinusoidal signal from filter circuit
3
Single Phase Full Bridge Inverter - I Can't figure out which PWM Control Technique is used
1
Half Bridge Inverter Effect of Load on waveforms
2
Half Bridge with PWM- gate signal problem
3
How can I get rid of this distortion?
1
Why the intersection points in SPWM define the width of the pulse?
1
Help with LTspice inverter simulation