How do I build a one shot non-retriggerable pulse generation circuit with 2 triggers?

I'm kind of a noob when it comes to electronics (I'm mainly a computer programmer), so please bear with me. I want to construct a one shot non-retriggerable pulse generation circuit that has two trigger inputs. The inputs on the triggers are going to be persistent signals (not just pulses) so I would like the circuit to only generate a pulse when one of the input lines is pulled high, and not generate another one until either the second input line also gets pulled high, or the first input gets pulled low and then high again (this behavior may be easier to achieve by using two pulse generators and tying the outputs together, but in this case it is still important that each pulse generator only fire a pulse when the trigger signal goes from low to high, and not continue to generate pulses if the signal then remains high for a while).

The reason the trigger signal may remain high for a while is because the triggers are going to be user-operated. For example, let's say that each trigger is connected to a button, and the output is connected to an LED (just an example, not what I actually intend to use this circuit for). If the user presses either button, the LED should flash once, regardless of whether the user continues to hold down the button after pressing it. If the user then presses the second button while still holding down the first one, the light should flash a second time; the light should not flash again until the user releases at least one of the buttons and then presses it down again.

I hope I'm making myself clear as to what I need this circuit to do. As I said before, I am mainly a computer programmer, so I will provide some pseudo-code below if it helps to understand what I am asking.

I am not against using a microcontroller, but only if the delay it introduces is negligible (I need the pulse to occur nearly the instant the trigger line is pulled high).

As I said, I'm kind of a noob, so I would really appreciate it if someone could provide a full schematic of the best way to build this circuit, although any suggestions at all are still welcome. I don't want this to be too expensive, so no super expensive parts please.

Here's a really cheap, simple way to do it in hardware; no code, no debounce, no input-to-output delay, it just works.

TRIGA is one high-going input, TRIGB is the other, and OUT is, well, the output. 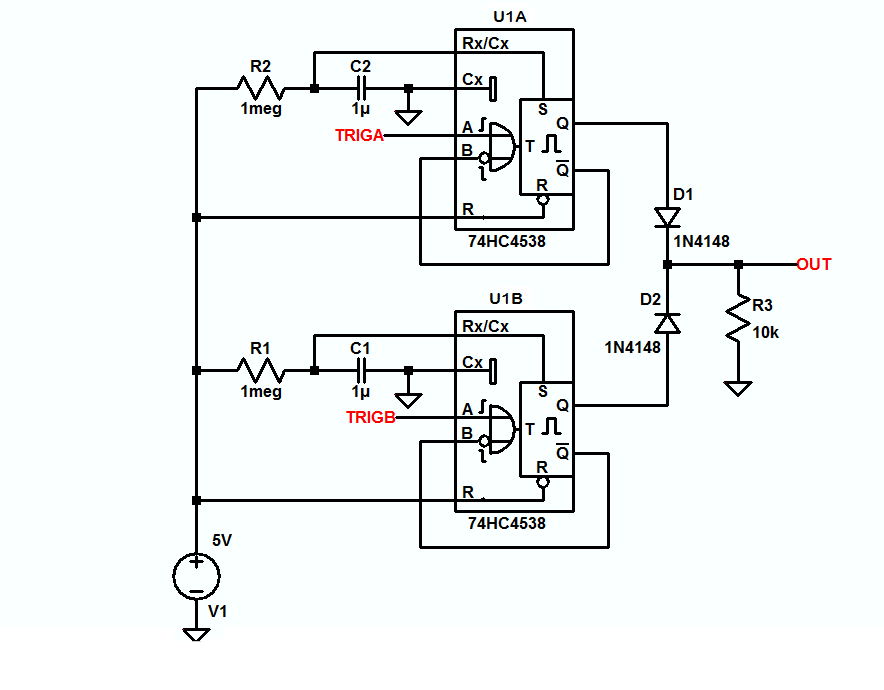 A PIC 10F200 can do this job easily. Since this is working on a human time scale, the microcontroller will react instantaneously. Humans don't notice a delay up to a few ms or low 10s of ms, so the PIC 10F200 running at 1 MIPS is plenty fast enough to poll the two inputs, decide what to do, and light or unlight the LEDs accordingly. Even if it took 100 instruction cycles to react (that's a lot), the delay would only be 100 µs. Nobody will ever notice that delay.

Another thing you should be aware of is that switches bounce. You need to add deliberate debouncing code so that the "chatter" when the switch closes and opens doesn't get interpreted as a lot of fast button presses. This is normal and common thing to do with mechanical switch signals. Look up "switch debouncing" for more information.

Buy the cheapest microcontroller you can find, and implement the code you just presented. If you're super worried about delays then use interrupts to react to the button presses. I doubt the microcontroller would be too slow even with just polling since it won't be doing anything else.

Not the answer you're looking for? Browse other questions tagged generator pulse or ask your own question.

1
One shot pulse generator (5ns)
3
Pulse reset line with long press of a button
0
Easy circuit for “nested” triggering
3
Convert 2s pulse into short pulse to wake up ESP8266
1
Question regarding operation of a pulse generator circuit with 3 transistors (exercise 2.3 art of electronics)
0
How to generate a single pulse using RC circuit from a fixed DC supply without any controller, timer or delay IC?
0
How to make a positive pulse with a button?
1
What's the phase relation between the sine wave and the sync output from a function generator?
0
15kV High voltage pulse generator circuit how to have digital control?