Why is there a 0R resistor linking GND and AGND in analog voltage reference circuit?

This is related to another question I've just posted (What's the purpose of a ferrite bead inductor on this circuit?), regarding the battery charger described in the AVR450 Application Note - Battery Charger for SLA, NiCd, NiMH and Li-Ion Batteries, which one day I hope to build.

On page 40, there's a schematic showing the MCU connections (picture below). Marked in red is a 0Ω resistor that is puzzling me. I suspect that it is just a wire jumper linking AGND and GND. But I don't understand why there's a jumper there. 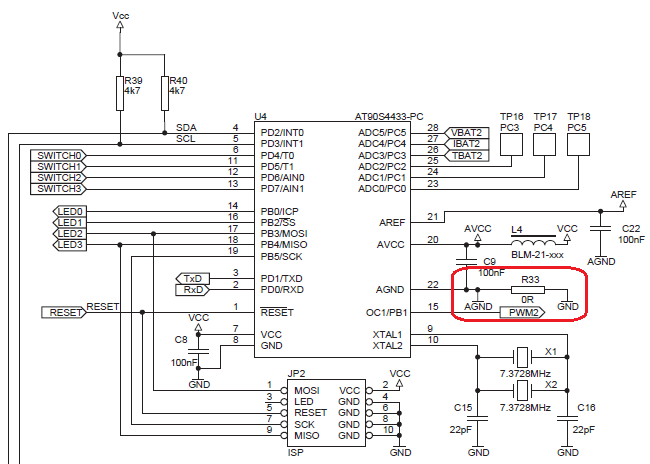 Digital circuits are noisy, but they can (mostly) handle their own noise without noticing. Analog circuits notice noise a lot; in fact, they have to pass noise just like a signal because they really can't tell the difference.

The best way to keep digital noise out of analog circuits is to keep them separate, both physically and electrically. But they have to be connected somehow in order to convert from one to the other, hence the jumper in exactly one spot, which is probably next to the converter on the physical board.

I'll repeat what I wrote in your previous question and expand on it a bit:

In communication between the engineers and layout persons it's sometimes easier to give two nets that are connected together separate names and join them at a single point, either with a physical 0R (0\$\Omega\$) resistor or with something called a net tie, which appears as copper on the board but looks like a component joining two nets in the schematic. 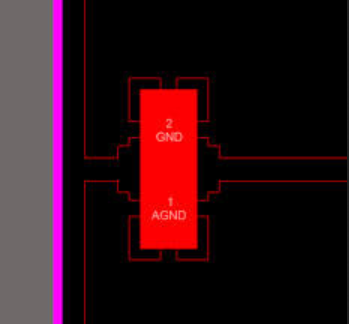 The other idea is to try to put some impedance between analog and digital ground- and that's almost always a bad idea. If the difference between the two grounds exceeds more than a few hundred mV at any time, bad things will happen. It's usually best to tie them together closely and to a solid ground plane if possible.

It is simpler from a PCB design standpoint to just short the grounds together (by installing the 0 Ohm resistor). It is more complicated (and error prone) to design your board with two ground planes.

The jumper is there so that both configurations can be done (separate or unified ground planes).

Not the answer you're looking for? Browse other questions tagged grounding voltage-reference or ask your own question.

11
Why use a 0 ohm resistor?
8
What's the purpose of a ferrite bead inductor on this circuit?
12
Why is this resistor connected between connector shield and ground?
1
What do schematic symbols (R, C) marked "SHORT" mean?
0
signal ground and power ground

8
What's the purpose of a ferrite bead inductor on this circuit?
0
Why should we couple AGND and DGND?
1
Resistor Between Voltage Reference and + Input of Op-Amp? Why?
25
Why use 2.048V and 4.096 as a reference?
2
AGND and GND - Grounding in Schematics
0
Connecting analog GND and power GND
1
Is there any use of a 65 mV reference voltage?
0
Connection between Analog GND and digital GND
0
Using a reference voltage in place of GND for ICs