Using a bottle of water as a resistor

Today, while drinking some water from a \$500mL\$ bottle, I started reading the info about the water and found out that the conductivity (\$\sigma\$) at \$25°\$C is \$147.9\mu S/cm\$. So it came to my attention that maybe I could calculate the resistance of the water bottle, from top to bottom. After some measuring, I found out that the bottle can be approximated as a cylinder with \$18cm\$ height and \$3cm\$ base radius.

Then, I bought a new full bottle, made a hole on it's bottom (of course avoiding leakages) and measured the resistance (with a digital multimeter) from this hole to the "mouth", at first making it so that only the tip of the probes touches water. The measured resistance was really high, ranging from \$180k\Omega\$ to even \$1M\Omega\$ depending on how deep in water I positioned the probes.

Why is the measured resistance so different from what I calculated? Am I missing something? Is it possible at all to use a bottle of water as a resistor?

Edit #1: Jippie pointed out that I should use electrodes with the same shape as the bottle. I used some aluminum foil and it actually worked! Except this time I measured ~\$10k\Omega\$ and not the \$4.3k\Omega\$ I calculated. One thing I was able to notice while lighting a LED with water as a resistor was that the resistance was slowly growing over time. May this phenomenon be explained by the electrolysis that happens while DC current travels through water (the electrodes slowly get worse because of ion accumulation at their surfaces)? This would not happen for AC current, right?

The formula you use is valid for a certain area, but the size of your probes is nowhere near the area you used in your calculation. If you want a closer approximation, you'll have to use electrodes similar in size as the area you calculated the water column for, one flat on top, one flat at the bottom.

For instance, take this cross-section of a good old-fashioned carbon rod resistor:

You notice the wires don't just stick into the carbon rod - instead they attach to metal plates the same diameter as the carbon rod.

The same with a more modern carbon film resistor: 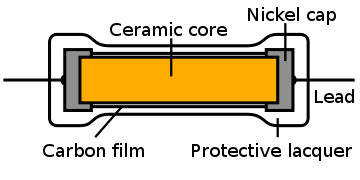 Here the wires attach to nickel caps which connect with the carbon tube right around its circumference, not just at one point.

As Jippie already pointed out, one of the issues is that your electrodes were much smaller than what your calculations assumed. They seem to assume the entire top and bottom areas of the cylinder will be the electrodes.

However, the resistivity of "water" varies widely. Very very pure and deionized water has very high resistivity. The resistivity of any real water you likely have access to is all about what impurities are in it. Even tiny amounts can make a large difference to resistivity.

Another issue for making a resistor from water is that there will be electrolisys at the electrodes. With no impurities and inert electrodes (like graphite), you will get hydrogen released at one electrode and oxygen at the other. With impurities and chemically active electrodes, lots of things can happen. For example, if you electrolyze salt water, you will in part get chlorine gas. Most metals will corrode at one end of the other if used as electrodes.

Water simply isn't a good substance to make resistors out of.

I've tried to measure the conductivity of water a few times with a DMM without much luck... or reproducible results. (using big flat probes.) Reading this, http://en.wikipedia.org/wiki/Conductivity_(electrolytic)

I think the problem may be DC electrolysis in the water/ probe ends. Now I'll have to try it AC some day!

Edit addition: (Friday Fun.)
So I was motivated to measure the resistance of water.
I put some 1/2 inch diameter SS posts in a plastic tub with ~1" of Buffalo tap water in the bottom. (A picture and data are here.)

Signals from a function generator where sent through the probes to an opamp TIA. (R = 1 k ohm) I moved the probes around an got ~ 1k ohm of resistance (See TEK000). Then I stuck the probes into a DMM (resistance scale). The resistance changed rapidly at first (starting at ~3k ohm) then slowly rose up to ~50k Ohm, at which point the DMM auto ranged and went to ~300k Ohm and then the resistance dropped to ~200k Ohm.

I then played some, Looked at step response, changed voltage drive amplitude.
(again data is in dropbox link)

I then sprinkled a pinch of salt. The resistance dropped quickly to ~100 Ohms (closer 150) Trying to measure with a DMM the resistance was 40 k Ohm!

The time constant was a lot faster with salt in the water.

I did my high school physics project on the DC conductivity of pure water (32 years ago) and found that increasing the current decreased the resistance linearly at first and then quite dramatically, the former and latter possibly caused by electrolysis at the electrodes (as mentioned by Olin Lathrop) causing ionization, the opposite of what you have found.

What you are missed in calculations is the temperature coefficient to correct the temperature changes if it is other than 25 degr C. For most applications has a value of a 2% per degr Celcius.

Not the answer you're looking for? Browse other questions tagged resistance water conductors or ask your own question.

11
What about water makes it destroy electronics?