When I add another 3 LEDs in parallel to existing 3 (having 6 LEDs total), the current stays same but the voltage across each line drops slightly. When I finally have 18 LEDs (6 parallel lines), the current was still ~20mA but the voltage across each parallel line dropped to 9.5V. Somehow it must be okey for the LEDs because they did not lose their brightness. 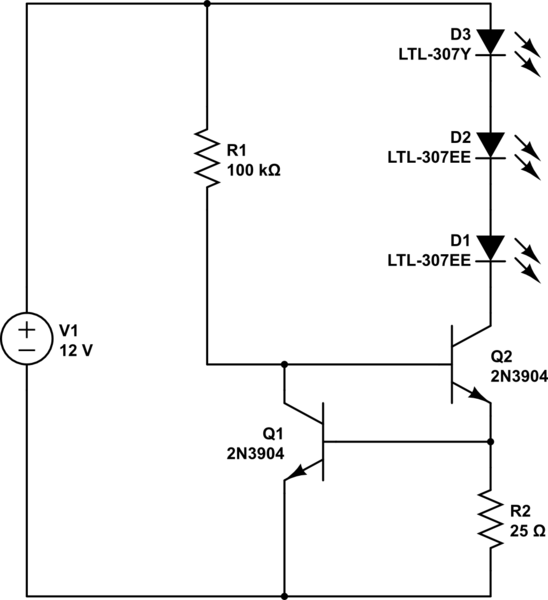 You may think the LEDs are the same brightness as you add more strings in parallel, but the 20mA is actually splitting itself between all of the parallel strings. So each time you add another string of parallel LEDs, the 20mA is getting split even more and the brightness of all of the LEDs is going down a little.

The relationship between current and apparent brightness of an LED is complicated. It's not actually linear, which is probably why you don't think the LEDs are getting any less dim. But I promise they are.

There's another complication as well. LEDs have a negative temperature coefficient. As they heat up, their forward voltage drops. Due to manufacturing variability, one string of LEDs will inevitably drop its forward voltage a little more than the others, which will cause it to grab a larger chunk of the 20mA, which will cause it to heat up more, which further decreases its forward voltage, and so on. The end result is that one string will tend to "steal" most of the available current and appear brighter. The easiest way to prevent that is to put a small resistor in series with each string. Regular resistors have a positive temperature coefficient (their resistance increases with temperature), so that works to balance out the current in each parallel strings.

I assume you have a separate current source for each triplet of LEDs? In that case you should measure the voltage across your +12V source. Maybe it's dropping.
However, if you use the same current source for 2x3 LEDs and so on you have to adjust it to 40mA (adding 20mA per row), since they're in parallel. The current splits.
Keep in mind that LEDs don't behave the same as resistors. Half the current through one LED won't result in a 50% voltage drop. The loss in brightness could be subtle as well meaning, you simply don't see it but it is there.

If you want the same brightness for all the LEDs you have as in the original (3-LED) circuit, you'll have to let 20mA across each parallel string of your LEDs. To achieve that, you'll have to duplicate your circuit (R1, R2, Q1, Q2) for every string of LEDs. Simply connecting the parallel strings together, and increasing the total current (to a multiple of 20mA) is not a safe way to go, as the current will not be properly shared between the strings.

Or, instead of this moderately complicated circuit, you may use a simple series resistor (one resistor in series with each parallel string). If the voltage source provides a constant voltage then this will provide an acceptable solution.

Not the answer you're looking for? Browse other questions tagged led current-source or ask your own question.

151
How can I efficiently drive an LED?