I am building a solar MPPT tracker. First of all: what I understood from MPPT is that MPPT units transfer the maximum power available from a solar panel at that time to the load. This can be done by changing the duty cycle of the boost converter. My questions are, assuming my load is constant:

Basically, the way this works is the input resistance of the controller is adjusted such that the product of the voltage and current (power) drawn from the panels is the largest. The controller is generally configured in a similar manner to a buck DC to DC converter, and the duty cycle of the switching transistor is adjusted to change the current draw from the array. The voltage and current from the array are monitored by the controller, and the duty cycle (current draw) is adjusted to keep the efficiency high. According to https://en.wikipedia.org/wiki/Maximum_power_point_tracking , there seem to be several different methods of doing this. The simplest method is called 'perturb and observe', and the idea is to adjust the operating point slightly and then check to see if the new operating point is better or worse than the old one.

Partial shading is where some parts of the solar array are in shade and as a result perform differently. MPPT controllers connected to the entire array cannot compensate for this, and the efficiency will suffer. MPPT controllers connected to individual panels can track the best power point on each panel individually and can compensate for partial shading to some degree.

A dc-dc converter is generally used in a PV system as an interface between a PV string and a load, as shown below:

Then, the operating condition resulted by a PV string connected with a dc-dc converter is shown as below: 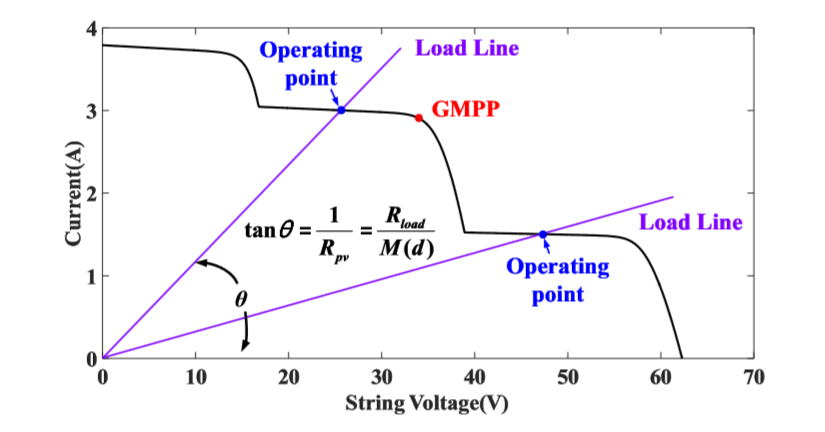 As shown in this figure, when you change d, the operating point will be changed even if Rload is constant. The aforementioned part is how the MPPT works with duty cycle.

Q3: Normally, there are two groups of peaple. One group prefers to used indirect control. For example, their MPPT methods give a desired voltage. Then, this desired voltage is compared with the current sensed voltage. The difference is, then, sent to a PI controller. Finally, the Pi gives a PWM to control. For the other group, they use the direct control. Their MPPT just give a value of d to generate a PWM.

Both of them can change duty cycle d but the different ways.

Q4: The second figure is the I-V curve for partial shading condition (PSC). It is caused by the SOLAR IRRADIANCE MISMATCH between the PV modules if these PV modules are connected in series.

It is hard to say which method is the most effective. But the most popular one refers to “0.8Voc” Model method.

Not the answer you're looking for? Browse other questions tagged solar-cell boost buck mppt or ask your own question.

4
Confusion about solar cells and MPPT