In a new design I would like to use the MAX682. In the datasheet I found this typical operating circuit: 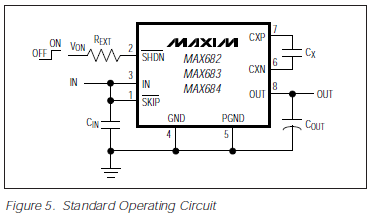 I would like to use it exactly like that except that I'm going to pull /SKIP to GND.

In table 2, I find the recommended values for the capacitors: CIN should be 2.2uF, CX should be 1uF and COUT should be 47uF (tantalum) or 10uF (ceramic).

I actually did a quick test myself and used electrolytic capacitors everywhere. In total, the circuit drew about 110mA, while the 5V circuit drew only 2mA. And besides that, the output has about 0.4V AC noise. However, it's not entirely sure that this is just because of the capacitors, because I for example didn't use a very short trace between GND and PGND (pin 1 is top left): 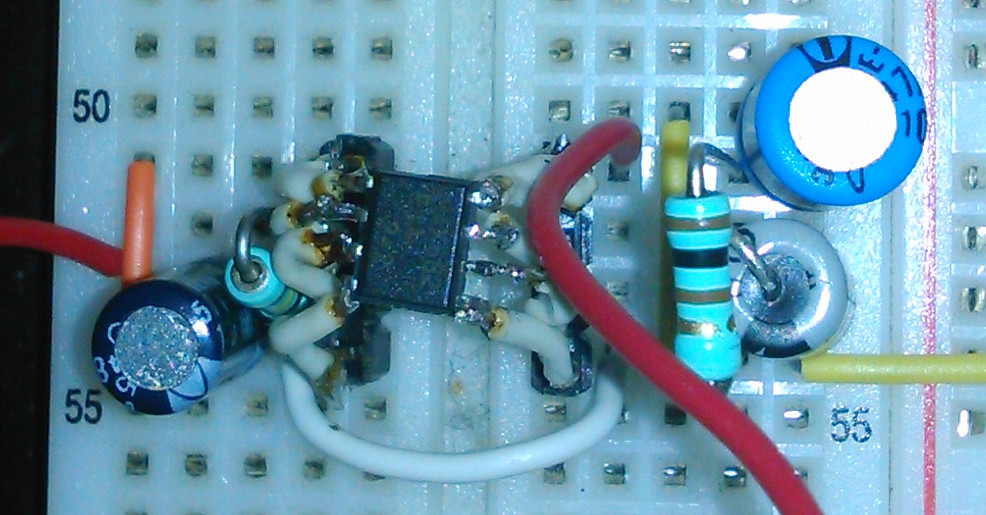 So it really isn't possible. The question remains why.

I see three things that are hurting your charge pump circuit.

The capacitors are aluminum electrolytic instead of ceramic, so they have very high dissipation factor and low self-resonant frequency. These charge pumps really do require ceramic capacitors.

Second, they are radial-leaded and axial-leaded capacitors instead of surface-mount. That adds some series inductance, which tends to defeat the capacitance.

Third, the whole thing is built on a white solderless breadboard, which adds even more inductance. You'd be better off using a PCB breakout board (like a Surfboard) and solder capacitors with trimmed short leads, or better yet, surface-mount capacitors.

Back in the day, ceramic capacitors were only available up to about 10uF, but nowadays there are 100uF ceramic capacitors. So the need for using tantalum and aluminum electrolytics is somewhat diminished; now it's driven by a cost vs performance trade-off.

The self-resonant frequency (SRF) is important in switching circuits, because at frequencies higher than SRF, the capacitor stops behaving like a capacitor and starts behaving like an inductor. Surface-mount ceramic capacitors are usually higher SRF and thus closer to "ideal" capacitors.

Aluminum electrolytic capacitors are great for providing a large amount of capacitance and accepting large inrush current, these are typically seen on power supply inputs. But they don't work well for the "flying capacitor" of a charge pump.

Take a look at MAX619EVKIT http://datasheets.maximintegrated.com/en/ds/MAX619EVKIT.pdf for an example of a good charge pump layout, using surface-mount ceramic capacitors.

Disclosure: I am a Maxim employee and designed the MAX619EVKIT way back when great lizards roamed the earth.

The problem is likely to be because electrolytic caps have high relative ESR compared to ceramics.

At the bottom of page 8 of the data sheet it says: -

Such small values as typically used are not always found in electrolytic types.

0
Capacitors not keeping charge as expected