I have multiple RFID cards that I use to get into parking garages at the office, client site, home, parents place, etc, etc, etc.....

A) combine all of these into 1 card or device (perhaps pressing a button to send the right signal?)

Or even better B) Have a way to transmit the proper signal from a device mounted in my car with a dash button.

Brian is partly right when he says RFID tags are passive. They are passive in the way that they don't have their own power supply, but they're absolutely active when they send their code. It's debatable.

The RFID reader sends a continuous LF RF signal (125 kHz is the most used, but there are also HF versions working at 13.5 MHz). Range of this signal is low, that's why you have to hold your RFID tag close to the reader to have it react.
The RFID tag picks up this signal and uses its energy to power a logic circuit (a shift register, a microcontroller is overkill. See note) which then begins to send a unique serial code. Sending may not be the right word, firstly because it picks up so little energy that there's not much left to broadcast again. What it does is use the serial code to switch a tuned circuit, tuned at the same 125 kHz used by the reader. The result is that the tuned circuit sucks up energy from this field, and the reader will notice that, and retrieve the code by demodulating the loaded carrier. That's the way the code from the RFID's tag is 'sent' to the reader.

A)
You want to combine all your RFID tags into one. It can be done, but there are some hurdles to be taken.
I already said that different RFID readers may work with different carrier frequencies. If that's the case for your RFID tags you'll need to make several versions of your 'universal' tag. In the following I'll presume that they all use the same frequency.
Most important is that you'll need the codes. You'll need an RFID reader for this. Most low-cost modules on the market are stand-alone, however, without interface to an external microcontroller. You'll need to patch them to intercept the codes from the demodulator. You can feed that into a microcontroller for decoding, but you can also watch it on a scope. The latter has the advantage that you also get the timing information.

Next you program a microcontroller which sends each of the codes in succession, or rather bursts of each code, because the reader may require that it sees a code a number of times. This guy gal admits she uses some dirty tricks, but I find them foremost clever. 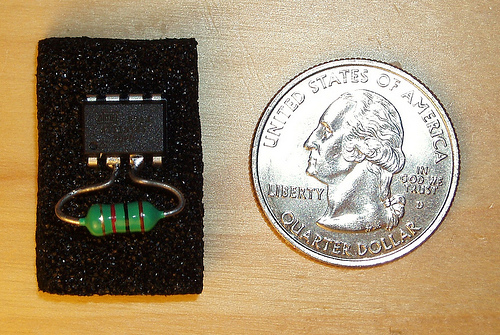 This is the complete circuit, sans the antenna. Not even the power pins are connected. What she is does is use the clamping diodes on the I/O pins to feed \$V_{DD}\$ and \$GND\$ from the RF signal on the inputs. Very clever, hat off! She uses an AVR, I probably would have used an MSP430, as it's lower power.

B)
You could use some buttons to make the controller send the corresponding codes, instead of all of them in succession.
Apparently I missed that you want to use it remote. That's not possible, it only works at very short range (centimeters). Part A) of the answer too, BTW.

Note: currently RFID is mostly used for access control and user identification. Logistic business wants to start using them in the next years as a replacement for barcodes on products. That means that even the cheapest product in your supermarket will have an RFID tag in it. Before this can become reality the tags must become cheaper, extremely cheap, think cents. Impossible if you use a microcontroller in it.

They are passive, so b) isn't realistic.

Keep in mind the antenna is also in the card. If they use different frequencies, they will need different antennas.

These cards don't send a code, they respond to a query. As Brian said, they are passive. They don't even have a battery in them. The reader puts out a RF field that powers up the card, and the card puts a variable load on the RF field which the reader then detects. In this way the card sends bits back to the reader.

The RF put out by the reader is not radio in the normal sense. Normally when you turn on a radio, it doesn't change the load on the transmitter that's probably miles away. In this case the transmitter and receiver are close, within what's called the "near field". That allows the load the card puts on the RF field to be felt by the transmitter, which is how the card sends a sequence of bits back to the transmitter without itself actually transmitting anything.

Hopefully now you can see why what you're asking doesn't make any sense. You can't sit some distance away and send codes. Differfent systems probably use different freuencies and encoding schemes too.

Find the numbers of the rfid cards. Then order rfid keyfobs to match each card. It's not one device, but you can fit them all on one keychain.

Not the answer you're looking for? Browse other questions tagged arduino rfid automotive or ask your own question.

4
Will cutting power to a CMOS chip effectively remove it from the circuit?
1
Arduino getting supply from digital pin?
5
use RFID remotely