Take a look of this product: http://www.hobbyking.com/hobbyking/store/__68694__HK_Pilot_Power_VI_Module_Distribution_Board_And_Dual_UBEC_ALL_In_One_120A_and_10s_.html 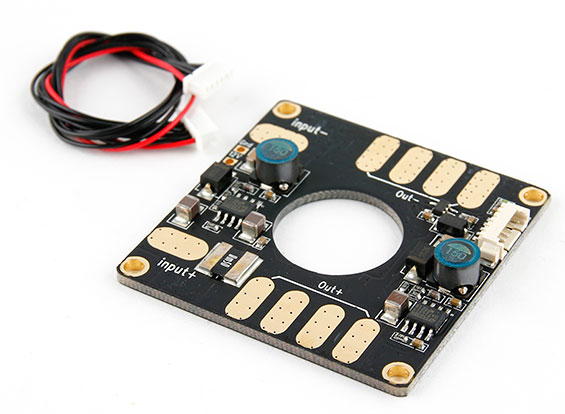 It says is a 45 by 45 mm PCB, gold plated. It is just a power distribution board, two input pads where you solder the battery leads and 8 output pads.

What I don't understand is that it says can handle up to 120 Amps, using any online trace width calculator, a trace in order to be able of handling that amount of power needs to be almost 60mm wide...

How can they handle that amount of current in that small form factor?

They are using power planes, maybe even with double-thickness copper layers too (70 microns / 2oz, rather than the usual 35 micron / 1oz Cu thickness), so the power path to the outputs is not going to be high resistance, and therefore not waste much power as heat loss, and therefore will not get hot and explode and otherwise be unable to "handle" the amount of current shown.

120A for 8 outputs is not too bad, each contact (which looks like just exposed mask on copper planes with holes for thermal relief) only needs to handle about 15A each which is entirely possible with nice fat wires going out to the rest of the set-up.

I would be worried though, first about the size of the battery needed, and second about your safety, if 120A loading was a common thing in your system.

You must also understand that using a trace width calculator makes certain assumptions, for example what the ambient temperature is, what the acceptable rise in temperature of the traces is, and in some cases how long the trace is, and finally the thickness of the trace which is usually measured in micrometers or ounces/square foot (oz). If you allow up to 30-40 degrees Celsius increase in temperature of the traces (which is usually fine for power related systems, which are often rated to 120-150 degrees) you can get away with very thin (2-3mm) tracks for carrying 15A, let alone how much you can do with a whole power plane (could be modeled as a 30-40mm wide trace!).

Looking at the pictures of the board, I don't see any tracks on either side leading to the power pads, and the pads each have several vias, so I would assume that the thing is a four-layer board, with the high current connections being on internal power planes.

Did you check the thickness of the trace? By default, copper layer on a pcb is 5mil (1oz). On the board you are refering to the copper layer(s) is much thicker.

Not the answer you're looking for? Browse other questions tagged pcb high-current or ask your own question.