Modulation in radio communication means, changing a parameter of the carrier wave according to the amplitude of the modulating signal. Generally modulating signal (often audio or video) signal is of a lower frequency and known as baseband signal. While a carrier signal (much higher in frequency, able to be transmitted with feasible antenna) is known as passband signal.

So, although the modulated signals resulting from FM and PM look very similar, they are fundamentally different.

Phase modulation on the other hand uses a fixed frequency. It is then the change of phase that tells the demodulator what data to output. It usually makes most sense to look at what is called a constellation: 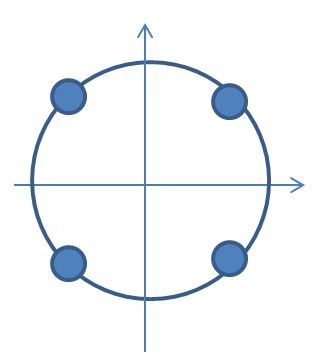 If you think of this as each point on the circle being a different phase change, you can see how each dot could represent different data.

Not the answer you're looking for? Browse other questions tagged signal modulation or ask your own question.