Output of a NAND gate 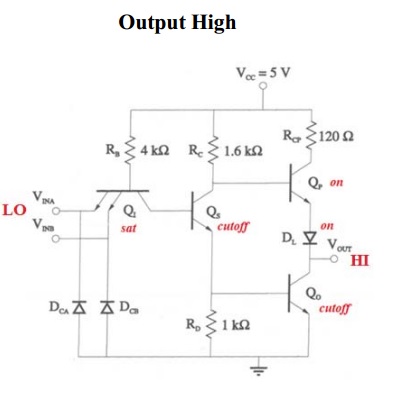 Above is a TTL totem pole output NAND gate. There is a 120 ohm pull up resistor there. Since it is called pull up, can we say that the HI output will be connected to a very high input impedance? If so what can it be as an example? Aren't NAND gates in an IC are connected to each other by being ones output is other's input? I mean in the figure the output will be the input of another gate right? If so HIGH will not be 5V since there will not be input impedance unless it is not connected to a very high resistance.

Where is this NAND gate's input coming from and where is the output going to? If the output is 5V isnt it high for a new TTL gate input and if is not 5V why do we call the resistor pull up in there?

The primary purpose of the 120\$\Omega\$ resistor is to reduce the current spikes when the output switches (when Qo and Qp are both on simultaneously for a brief moment). See, for example, here. It's a component part of the (active) pullup circuit, but it's not a 'pullup resistor'.

Totem pole outputs like this one use an active pullup, which is Qp, Rc and Rcp. When Qs is 'off', the base of Qp is pulled to Vcc by Rc, so the effective pullup resistance is limited by the collector resistance Rcp - so it's about 120\$\Omega\$, meaning that for a 50pF load, the time constant is about 6ns. Without the collector resistor it would behave more like a few ohms (1.6K divided by the current gain of Qp).

TTL inputs are defined as 'low' if they are less than or equal to 800mV and 'high' if they are greater than or equal to 2V. TTL outputs will be 400mV or less when low (and sinking 16mA or less), and 2.4V or more when high (and sourcing 400uA or less). That drive capability guarantees each TTL output the capability to drive 10 TTL inputs with a guaranteed noise margin of 400mV or greater.

Not the answer you're looking for? Browse other questions tagged ttl pullup or ask your own question.