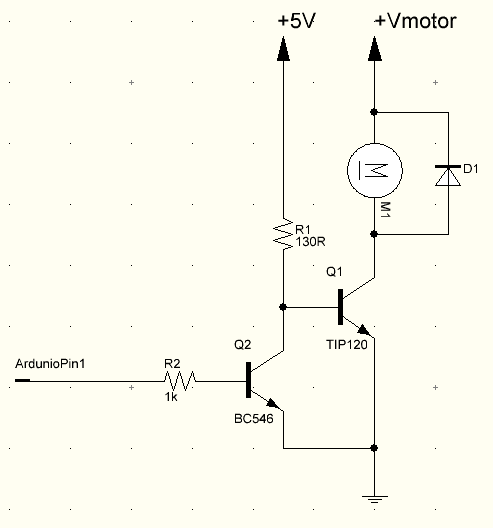 Above is the simple implementation for a DC motor control with pwm.

I was expecting to see a square wave with a Vmax when Q1 is ON and zero when Q1 is OFF like the one here: standard pwm

But what I saw in oscilloscope is different. The OFF stage is not zero and even increasing when pwm is increased. And when I stall the motor with my hand the OFF stage then really becomes zero. But not when rotating.

Here is the video where i adjust the pulse with frequency: DC motor voltage on scope

Why is the voltage is not going to absolute zero during Q1 OFF, instead it is increasing when duty cycle is increased. Ok Q1 is on the volatge should be there but why still there is voltage when Q1 is OFF and why it is increasing with pwm's duty cycle? Plus as I said before the wave form becomes exactly a pwm with zero for OFF stages "when I stall(stop) the motor with my hand" (when stall a bigger current passes and voltage decreases).

Back-EMF. Remember the motor is also a generator. Except when it's stalled.

Understand one important thing about an electric motor's operation : that back-EMF is always there when the motor is running. While Q1 is on it subtracts from Vmotor, so that the faster the motor is running the less voltage is applied across the windings, so it draws less current (and therefore power).

So as you slow the motor with your hand, the back EMF reduces, and the motor takes more current (and you can feel it making more torque from that current). Stall the motor and it will take surprisingly high current, and may eventually burn out.

As you say, Vwindings = Vmot - Vback_emf; When you increase Vmot, Vback_emf stays the same so Vwindings increase. But the winding resistance is the same, so the current increases. This increases torque, so (normally) the motor speeds up. THEN Vback_emf increases with the speed, reducing Vwindings and current. So the motor regulates its power consumption at a given voltage, to suit the load (friction etc).

And while Q1 is off you can measure the voltage and it gives you a pretty good speed measurement.

Current will only flow through the diode when the diode is forward biased. Which it isn't because the generated voltage is < Vmotor.

However the diode certainly isn't wasted! Another property of the motor winding is its inductance. This doesn't matter when computing the motor's speed and power. However it matters when current stops flowing, due to either the switch Q1 turning off, or the commutator inside the motor breaking current flow.

Current through an inductor stores energy (making the magnetic field) and releasing that energy can create enormous voltages (you can maybe see the sparks inside the motor!) and these would pull Q1 collector up to several hundred volts and quickly destroy it. Unless you fit the diode, which turns on and safely conducts that energy to Vmotor instead of making HV spikes.

Not the answer you're looking for? Browse other questions tagged transistors motor dc pwm or ask your own question.

-1
Will the current flow through the diode?