How to identify if noise is coming from circuit or scope?

Occasionally, I'll be probing a circuit and would expect to see something specific and sometimes I see either crap or the signal im expecting with crap.

This video from EEVBLOG is a good example of some of the things I've seen. EEVblog #225 - Lab Power Supply Design Part 4 - PWM Control I've jumped to the time that's relevant for my question.

He mentions that those spikes are probably due to his probing.

My question is when you probe an arbitrary circuit, and you see something that you weren't expecting, how can you determine if its coming from the scope/probing or from the circuit itself?

In another video EEVblog #577 - Precision 1A Current Source Part 2 he changed a wire to an alligator clip, and it changed the waveform completely and he gives a reason saying that its inductance. What characteristics should someone be looking for that would identify a signal is being distorted to the probing method or how the circuit is wired up (whether its a long pcb trace or an alligator clip) ?

And are there are tips/tricks, website or book recommendations that would improve my measurement techniques ?

My question is when you probe an arbitrary circuit, and you see something that you weren't expecting, how can you determine if its coming from the scope/probing or from the circuit itself?

Its not always so easy, as there are a lot of ways to get the same suspicions display. The best thing to do is cut the problem in half, starting by seeing if the same scope, with the same wires, probes, and settings, will do the same thing connected to another source. For example, if there are indeed pulse edges that are damped, have overshoot or ringing, see if its still true connecting to a known signal source of similar frequency. To start, many scopes have square wave calibration outputs. As long as your probe is on its X10 setting, you should be able to trim out overshoot or damping with the adjustment within the probe (usual via a small screw). If the frequency being measured is much higher than the calibration source, and you don't have an alternate, you may be able to deduce whether its a scope / probe problem by seeing if multiple points in the DUT show similar ablations.

Another comparison, if the DUT's power source is ground isolated, you can use two probes in differential mode, one connected to the DUTs common 0 Volt reference, the other to your test point. Often this will produce wildly different waveform qualities, depending on how much of the original problem is caused by grounding. Isolate your scope from AC power ground too. But if nothing changes and the suspicious display continues, you're at least a step closer to eliminating the scope.

But only to a point! Probe quality and the impedance of both the scope and probes can be a big factor, and at some point the limits of your equipment can bring you too close to the point where the famous uncertainty principal (which boils down to the impossibility of taking a measurement without affecting the measurement). I remember trying to troubleshoot DRAM< circuits, in which sensitive RAS/CAS lines were causing problems from ringing, and I was trying to choose the optimum damping resistor to control it. In the end I had to borrow a better scope, because the one I was using was adding to the problem. You too may need to procure at least some alternate probes, again to see if there is any change.

Now if the problem is more like superimposed noise (power supply switching or ripple noise, or other switching noise), then of course it will persist through all the above recommended checks. But a noise issue should be a little easier to trace, because it if is coming from the DUT, you will likely be able to find stronger and weaker sources of noise with the same visual signature, as you probe around the circuit. If the noise is present everywhere at the SAME levels, then you're probably back to the scope.

I'm sure my answer is probably little more than an "I feel your pain" response. But hopefully it will help you understand what you're up against, and something here will trigger a path to a solution. 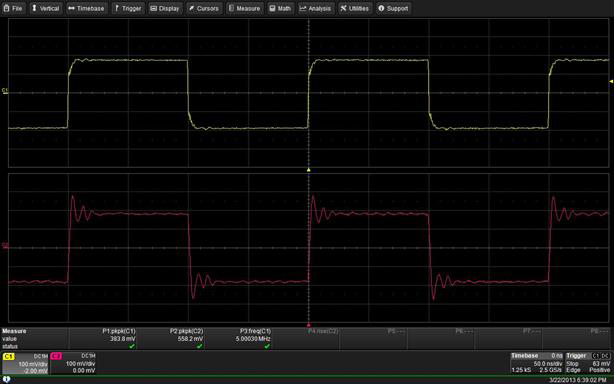 This is from an article by Teledyne LeCroy: Passive Probe Ground Lead Effects. Here, the upper yellow trace shows the output of a signal generator as measured by the scope where the probe has been stuck into a coaxial connector, thus keeping the inductance of the ground lead to a minimum. You can see there is minimal overshoot and ringing. The corners are a bit rounded due to the limited frequency response of the probe (500 MHz in their example) or the signal generator.

The red trace shows the result of measuring the same signal with the typical alligator clip lead. Note the excessive overshoot at the edges and the ringing.

Another issue is with an excessively long ground lead is that this stray inductance can mutually couple with nearby magnetic fields, or act as an antenna for RFI. This shows up as noise depending on with what it is coupling. Usually it's some high current, high di/dt thing elsewhere in the circuit, like motor drivers and switching converters tend to have.

To reduce these issues, we must reduce the inductance of the ground lead. Since inductance is proportional to the area encircled by a circuit, the shorter and closer to the probe tip we can make the ground connection, the better.

Some probes have a ground spring. Again, from Teledyne LeCroy: 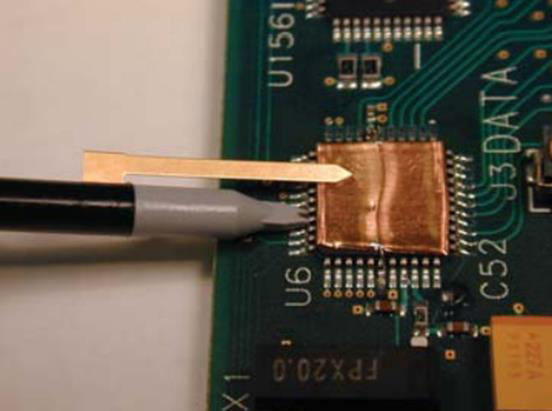 If your probes have no such accessory, then you can make your own with a bit of solid wire.

This video well show when and when not use one or another probing method.

The base is: the longer the probe lead/tip the greater the inductance.

Not the answer you're looking for? Browse other questions tagged measurement oscilloscope or ask your own question.

9
How to attach (safely?) an o-scope to various sources
4
Measuring accelerometer frequency with an oscilloscope
31
What do I need to know about oscilloscope probes?
10
Why does my waveform start ahead of the trigger?
2
Ground noise measured on scope
6
How can I track where this 471kHz noise is coming from?
0
Nature of noise gotten from digital oscilloscope
0
Measuring band-limited noise coming from an amplifier
3
AC->DC Power supply ground and probing
3
50Hz hum on oscilloscope probe only when using clip