Why don't over damped and critically damped circuits oscillate?

The reason underdamped LRC circuits oscillate is because the energy keeps flowing between the inductor and capacitor. The energy is being constantly exchanged between the capacitor and inductor resulting in the oscillations - the fact that energy is being lost to heat explains the asymptote and why the amplitude of the oscillations keeps decreasing.

So can someone please give me an intuitive explanation of why critically damped and over damped circuits don't oscillate? Why isn't the energy being exchanged back and forth between the capacitor and inductor?

Zeta is the damping ratio and a function of your system, \$\zeta=\frac {B}{B_c}\$; Where \$B\$ is the actual damping in your system and \${B_c}\$ is the critical damping value that if existed your system will reach the target value without oscillations. By knowing this one number zeta we will know how the system will respond. You may need to read more on derivation here. But for now just know that Zeta <1 means an underdamped system Zeta = 1 is critically damped and Zeta >1 is overdamped. 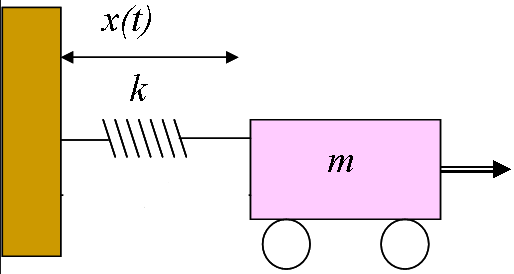 In a perfect friction less world if I pull the mass to the right and then release it (like a step input to a circuit), the the weight will continually oscillate back and forth forever. A circuit with a step input and only a capacitor and inductor will also oscillate forever to a step input. This is like ζ = 0

Now let's take the same system and add a resistor to the circuit and a friction damper to the mechanical system: 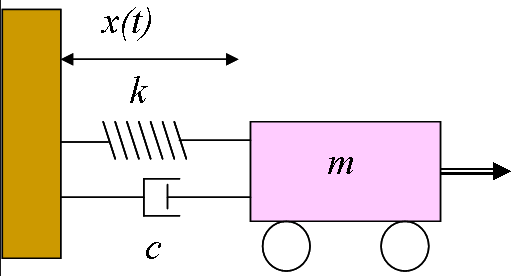 You can imagine if the friction is very low ζ = 0.1 and 0.2 the system will still oscillate for a while before everything comes to a stop. As we keep increasing R in the electrical domain or friction in the mechanical domain the oscillations will decrease until we get to ζ = 1. This is when the system is critically damped. It will return to it's original neutral state as quickly as possible without oscillations. I will pull the weight to the right let it go and because of the high friction it will slowly roll back to it's original position. If we keep increasing Resistance and increase ζ > 1 it will take the system longer and longer to get back to it's original state. The weight will roll back but even slower than in the ζ = 1 state.

Now let's plot all this behavior on a graph. We can see that the black graph is like our analogy 1, with only a capacitor and inductor. The green, blue, red and orange graphs shows what happens as we increase resistance of the circuit. Until we hit the purple graph which is critically damped. The dark blue show what happens as we keep increasing the resistance. 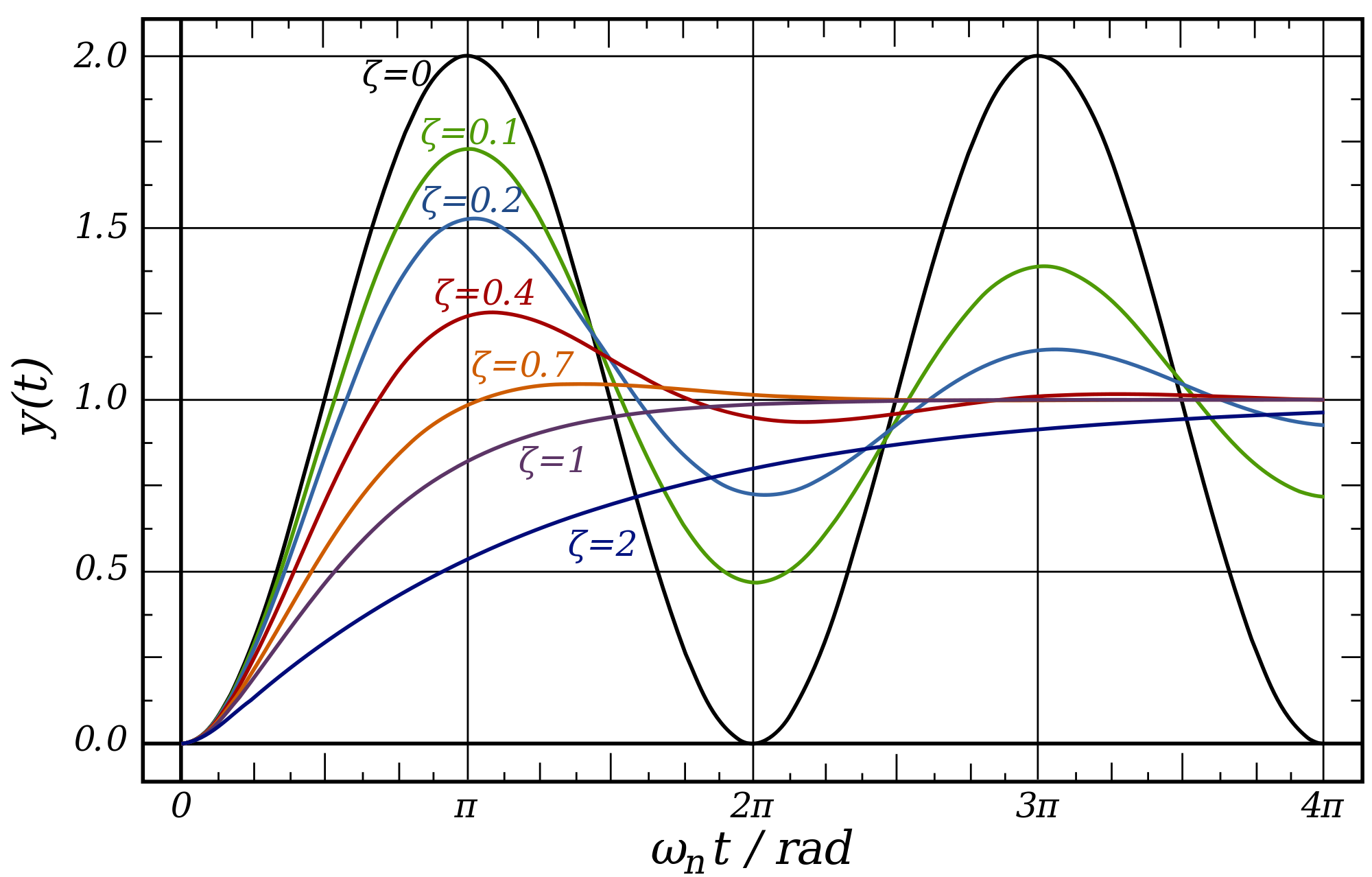 So in closing the reason that a critically and overdamped circuit doesn't oscillate is that the resistance (or friction) is too high to allow an energy exchange between energy storage elements like capacitors and inductors. All the energy gets dissipated in the resistance of the circuit before it can cause any oscillations - like a damper that doesn't let a spring bounce back and forth.

Imagine we are trying to design a "Servo-system". Its a system that takes an input angle and rotates a motor until its pointing at the input angle. The block diagram of this system could be represented like this

The proportional controller outputs tourque based of the difference between the current angle and the desired angle. We will test this system againest step inputs

You might be asking now "What does this has to do with my circuit". The answer would be "They are both second order systems" they both are charactarized by a second order time domain differential equation.

\$e\$ : The difference between the current motor angle and the required angle

\$T\$ : The proportional controller output that is the motor tourque

\$J\$ : The rotational intertia of the rotating body

\$B\$ : The amount of damping we provide to the system

Imagine we are not providing any kind of damping in our system, once the motor is rotating it will never stop rotating since there is no friction [assuming no frictions at all]

Here is the expected time domain response for this system.

\$B=0\$ is not a choice then, the system will never be stable if no friction is provided, so how much B should we provide to the system, and how would the system respond to different amounts of damping values.

We can define \$B_c\$ as the value of the damping that is enough to stop the rotating body at the target value; that is once the motor is pointing to the required angle and the proportional controller output tourque is zero, the rotating body has no energy to rotate anymore.

If \$\zeta < 1\$ this means that you are still providing damping to your system but this damping value is not high enough to prevent the rotating body from exceding the target value, this is the expected time response for an under damped system

If you think this answer is confusing or provides false information or even didnt answer the part you are asking about please let me know in the comments i`ll definetly delete it.

It's trying to, but it's being radiated away as heat by resistance in the circuit.

So can someone please give me an intuitive explanation of why critically damped and over damped circuits don't oscillate?

Imagine a child on a swing, which is an oscillating system. (Indeed, it actually has very similar math). An adult is pushing the kid higher and higher as the kid swings back and forth.

This adult would be the person applying energy to the oscillating system.

If everyone is in a vat of extremely thick liquid, eventually it becomes impossible to swing back-and-forth. Because the "thickness" or viscosity of liquid just prevents the swinging action all together.

Now we can imagine that there's a "critical" liquid, one where if you were just SLIGHTLY less viscous, swinging would occur. This "critical" hypothetical liquid would be the thinnest possible liquid to prevent swinging. Any thicker would be wasteful, any thinner would still have swinging occurring.

If you actually did all the math for a child and a swing, it would 100% match the dampening / oscillation math believe it or not. Air-resistance (or water-resistance, in the case of a "thicker" example) is your parameter for dampening.

Not the answer you're looking for? Browse other questions tagged capacitor circuit-analysis inductor or ask your own question.

0
Difference of inductor rated current based on "Inductance change" vs based "Temperature rise"?
2
Why do real LC oscillating circuits not oscillate at the resonance frequency?
3
Can an inductor/capacitor/resistor combo emit the same frequency as a given crystal oscillator?
0
Simulating all transient solutions for RLC series circuits
0
What are the initial conditions used to find the coefficients in the current equations?
1
Parallel RLC Circuit: how to write differential equation?
0
What is the difference between a tank circuit in an oscillator and a resonance circuit?
10
The Intuition for RLC circuits
0
Confusion Between Dual Capacitor/Inductor Circuits