Digital data coming out of a cell phone headset mic?

I want to connect a sound board / mixing console / whatever-you-prefer-to-call-it to the headset jack of my Motorola Android phone. I know the typical TRRS pinout of Left/Right/Ground/Microphone, and I know about the mic being phantom-powered by the phone and using the external impedance to detect:

So I know I need an attenuator (probably a pot) followed by an RC highpass with R ~2k before it goes into the headset jack. Not a problem. What I can't figure out is, what's this on an unconnected mic?: 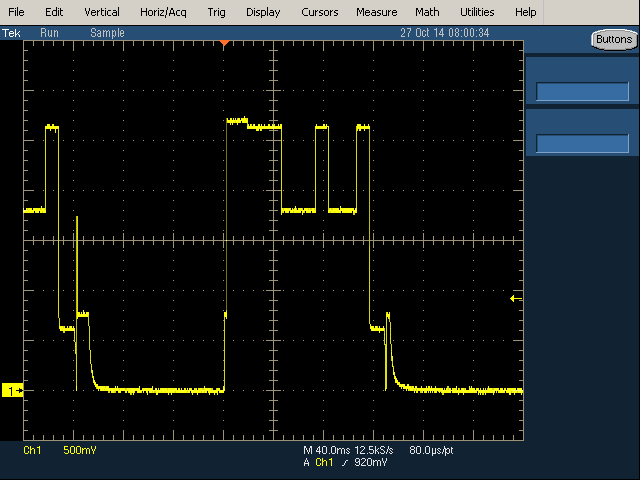 Kinda looks like a digital byte, doesn't it? It repeats the same thing at this rate forever. With a "bit" width of ~10ms (100bps, 50Hz) and a cycle time of ~250ms (4Hz), it sounds terrible. Probably not intended to be heard directly. 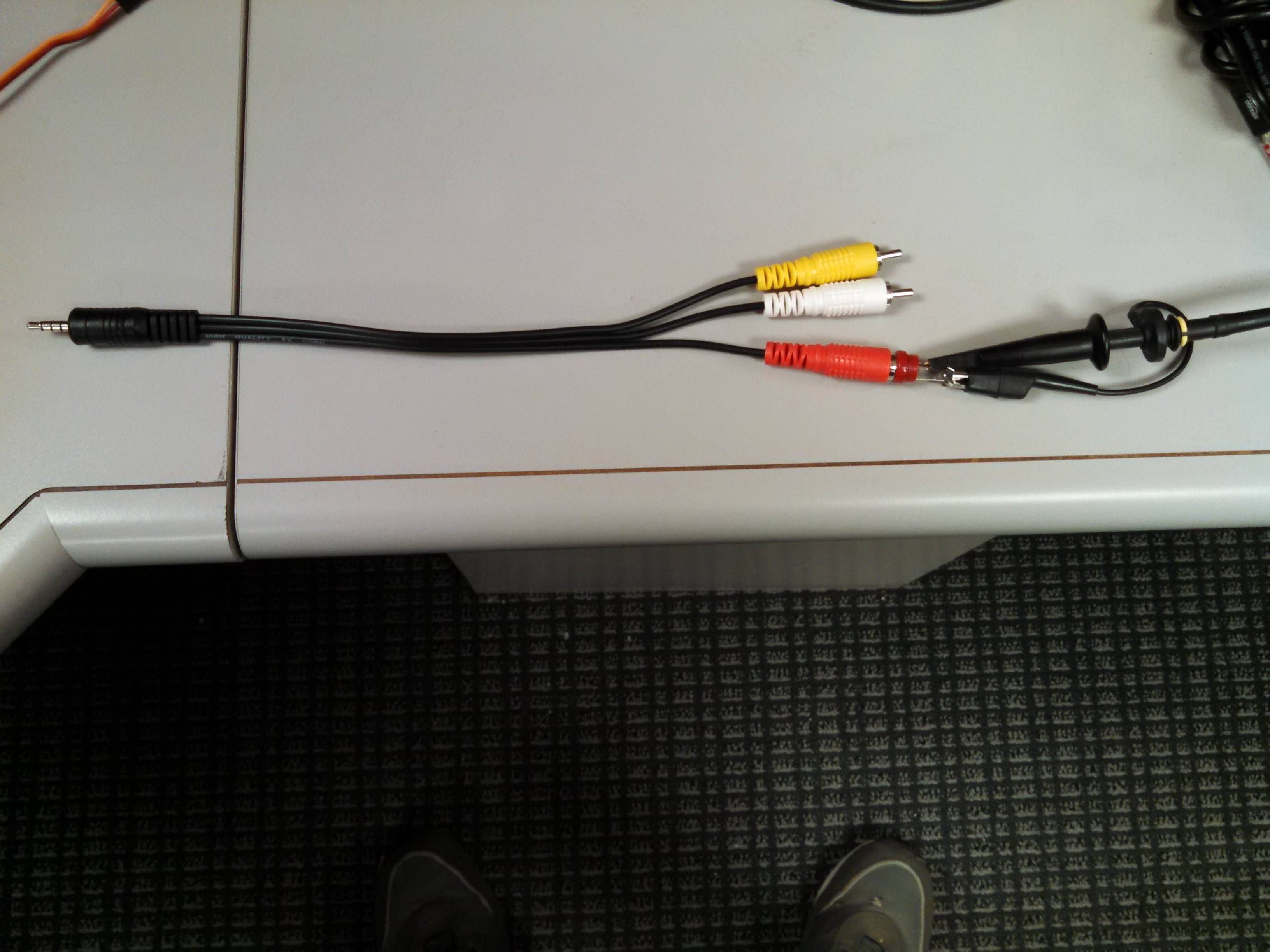 This adapter is intended for cameras, so the color code is wrong. A continuity checker says that the red plug is [S]leeve, which is mic for me.

I finally got around to adding a 2.2k termination to the mic plug and now it does this: 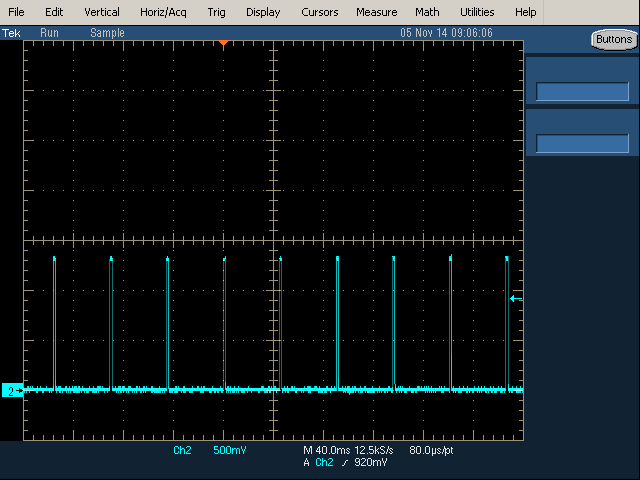 (same scale as before, just a different color)

I start an app that uses audio in, like an oscilloscope, spectrum analyzer, SPL meter, or call my voicemail, and it changes to this: 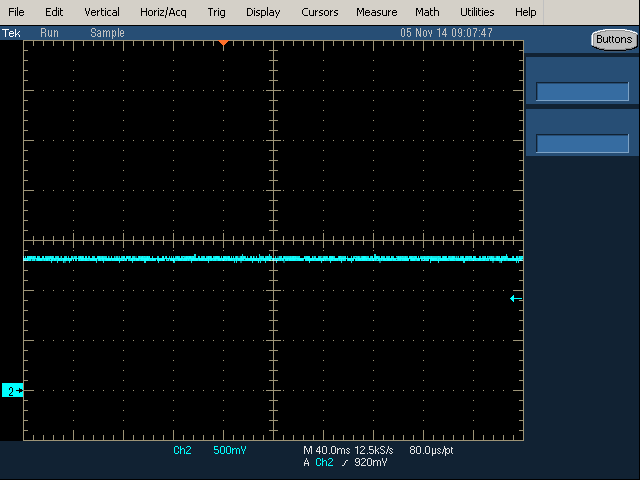 I don't have a good way to put a signal into it right now, but it looks like it works. I'll just need to add a series resistor to make it play nice with whatever it's plugged into when there's no app running to use it. I'll probably put it between the mixer's line out and the pot so as to guarantee a certain amount of attenuation. (it's still a mic in, not a line in)

The weird thing though, is when I remove the 2.2k termination, I get this instead of the original: 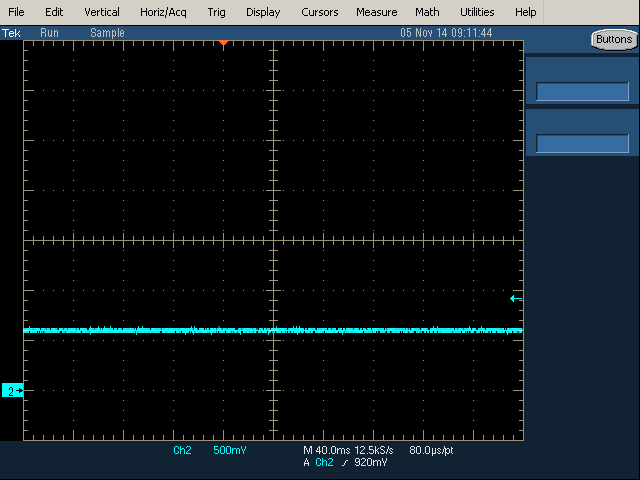 Almost like it saw the resistor, configured itself to use a mic now, and didn't go back. I'm still curious to know what it was doing before, but it looks like my project will work.

From diagram 3, I could think of two possibilities:

The pulse shows narrow, I could not sit and figure out it's width, but it does look like a start bit for me. Assuming it is a start bit, it is probably followed by, say some bits and a stop bit - all are zeroes (like a UART). Beyond that, the controller probably is expecting a response.

Which is the phone on the other end? I might not have access to the same model and I definitely don't have a similar cable handy to figure exactly out what is happening.

It might be interesting, though, to try sending an UART response on the line, taking the high pulse width as bit time: wait for ten or 11 bits and send high start bit and probably try some combinations. Even if we get a response, it might take a while to figure out the protocols etc. I would advise extreme caution, though - if it is a dangerous interface like a firmware backdoor, a trial sequence could potentially erase the flash.

Android allows you to do a ton of crazy stuff on the "headphone" connector. My guess is that something running on your phone is trying to connect to a device that might be plugged in- do you have Square or some other similar app running?

Check out this relevant article: http://www.tested.com/tech/android/522-androids-headphone-jack-is-versatile-yet-underused/

Not the answer you're looking for? Browse other questions tagged microphone adapter cellphone or ask your own question.

5
Is there any way to feed a signal (line-in) into a mobile phone?
0
Two mono microphones on a single stereo input jack?
14
Electronic aspects of iPhone 3.5mm audio output
2
Line Level to Mic Pad Working Randomly With Phones
0
What are the purpose of those resistors and capacitors network before the mic jack?
0
Linking Android phone to motorcycle helmet comm set
4
Device to loopback mic to headphones
4
Why an 8kHz notch on the headset mic input of a Qualcomm WCD9330?
0
Inject tone into computer