Why can't analog video be compressed like digital video (example inside)?

I'm learning the basics of analog and digital TV signals and I came across this (original link, now gone) short article (see the next page as well).

Why can't analog video signals be compressed in a similar way to digital signals when using MPEG-2 (refer to the article above where they give a basic example of what I understand by MPEG-2)? why can't "repeated" pixels be ignored in analog to reduce the bandwidth usage as in digital?

To see what I mean refer to this question. There you can find the following picture: 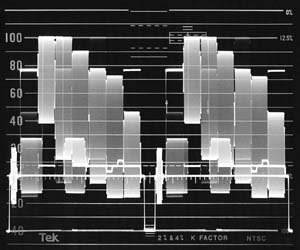 Why can't you simply "ignore" (by not modulating it) a line of pixels (assuming it didn't change between frames) and reduce the data signal frequency and therefore the bandwidth usage?

It's worth looking at how the various digital compression techniques work in detail, but they all rely on storing previous frames or bits of the current frame and computing based on the difference from the current frame. There are two reasons you can't really do this with analog:

Note that every frame of HD h264 decode will involve hundreds of millions of individual arithmetic operations. Encoding even more operations.

The analog TV signal was originally designed to be decoded with the smallest practical number of valves (tubes). Thus about half the signal space (30% of the signal amplitude and almost 30% of the time) is dedicated solely to synchronisation pulses easily detectable by analog valve circuitry, and the picture information is left with only the other half

Any enhancements over this original specification had to be implemented in a compatible way. Thus the colour signal is modulated on a high frequency carrier that does not disrupt the operation of the underlying black and white signal (though a really good B&W set will show it as a fine speckled pattern).

Later, other information (in the UK, PRESFAX, test signals - pulse and bar, one line of colour bars, CEEFAX/Teletext and closed captioning) were "compatibly" squeezed into nominally invisible "unused" lines during the field sync, but in practice you could see the moving dot pattern at the top of a badly aligned screen.

Compression could not be implemented in such a compatible manner ... how would you store a few lines of picture? Here's a box of tubes, have at it! When colour came along, a single line of low-bandwidth colour signal was stored in a delay line, for either delay-line PAL, or SECAM "Sequential Colour with Memory" decoders, but that wouldn't have been cheap enough before the mid 1960s. I think the delay line was a SAW (Surface Acoustic Wave) device.

In any case, signals as regular as your colour bar test pattern are too rare to be worth optimising. And if you saved some signal space on a simple picture, what would you do with it? A complex signal like a more typical picture needs the full bandwidth anyway.

An analog video signal is basically a waveform. It's 100% time based, and one frame takes a specific length of time to transfer, since that is how long the wave is.

Analog video only really has the concept of "now" - the single pixel that is being displayed at that moment.

Conversely, a digital video signal is an interleaved data stream. One of the sub-streams is the picture stream. This is a frame-based stream, where each frame of the video is treated as an individual entity. It's this concept of the frames that allows video compression. Digital video has the concept of "this frame" rather than "this pixel", so it can compare neighbouring pixels in all 3 dimensions (not only the up/down left/right 2 dimensions of the frame, but also the third "time" dimension, comparing with past, and even future, frames).

An analog video signal can be fairly easily converted into a digital format through the use of a frame grabber. It can then be compressed just like any other digital format.

A good analogy would be audio. Compare an old audio cassette with an MP3. When you're playing a cassette the tape is moving past the read head at a set speed, and the read head converts the magnetism on the tape at that specific moment in time to a movement of the speaker.

Conversely, with an MP3, chunks of data (again, they're called frames) and decodes them into an audio waveform for playing through the speaker.

(note: this is a vastly simplified description, and as a result is completely wrong ;) )

In the rest of this answer I only consider content-dependent compression methods such as MPEG.

In principle there's no reason why an analog signal can't be compressed. Compression was not originally used in analog tv because the technology did not exist yet, it requires processing hardware that did not exist, and if the hardware could be created at all with the technology of the time it would have been way too expensive.

Changing the existing signal format to e.g. add compression is problematic because all receivers need to be changed. This is basically what's happening in the analog to digital switchover in many countries. If all receivers need to be updated or replaced anyway, you might as well change the signal to digital, which with current technology is more cost- and bandwidth efficient than analog signals.

One could devise a way of adding some kind of additional signal onto the existing analog signal, but if you don't want all existing receivers to upgrade, you cannot remove the existing analog signal and you therefore cannot reduce the bandwidth usage. The main reason why countries are replacing their analog transmissions by digital transmissions instead of just transmitting digital next to analog is the limited amount of radio spectrum bandwidth available.

Another aspect is that to e.g. not transmit a scanline in an analog tv transmission if it didn't change from the previous frame, you would need to decide what "didn't change" means exactly. In a digital signal the values of pixels are quantised so it is simple to define when one row of pixels is the same as a previous row. In an analog signal you will never find the signals for the two scanlines to be exactly the same, so you will need some threshold of what you consider equal. By applying such a threshold you quantise this aspect of the signal, so you are a small step closer to being digital.

12
How do analog video signals work