LED strip brightness and its measurement - did I get ripped off?

I recently bought two 5m rolls of red and blue LEDs for building an hydroponic lettuce light. Each of them is supposed to have the following properties:

Naturally the high lumens were the thing that made me buy these ones. But I had my doubts so I started measuring their power consumption first: Red: 92,5 W Blue: 71,6W So red is drawing way to much current - still no big problem as I am interested in light intensity. 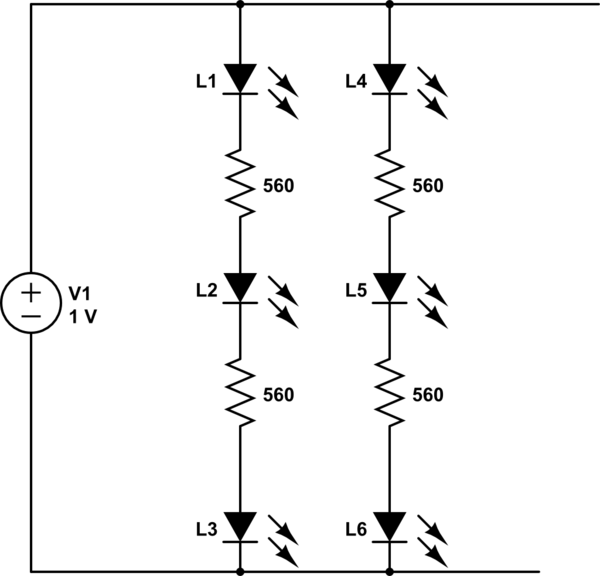 Then I measured all the LEDs and resistors and found the following:

That seemed legit from datasheets of other vendors (they did not include any data sheet). Finally I measured the luminous emittance with a Voltcraft MT-52 (cheap multimeter...). I made a box where only one LED could fit and positioned the multimiter 10cm beneath it. I measured: - Red: 55 lux ~ 1.73 lm - Blue: 115 lux ~ 3.6 lm

I know that my multimeter isn't exactly made for measuring this and probably has a quite big measuring error - especially for LEDs. But can the error be that big? And are there even 5050 LEDs that could give me 15 lm a piece?

Finally a pic of the LED strip (notice the weird circuit: LED--R--LED--R--LED) 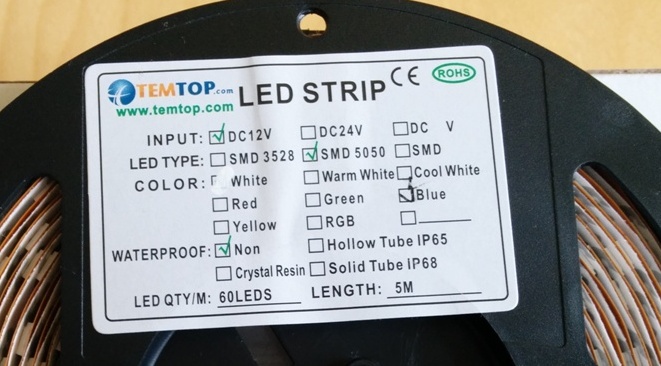 You're measuring the Illuminance and comparing it to the Luminous Emittance - two very different things.

Illuminance is the amount of light that falls on your sensor.

Luminous Emittance is the amount of light sent out by the LED.

You have to remember that the light emitted from the LED is sent out over a cone of 120°, so the closer your sensor is to the LED the more of the light will fall on it, and the less will miss it.

At the moment you're measuring a small portion of the actual light - just what shines direct on your sensor, and a small amount reflected by the inner surface of your "box".

You'd achieve the best measurement if you could ensure that 100% of the emitted light fell on 100% of the surface of your sensor, and the only real way of doing that would be to have a sensor the same dimensions as the point of light in the center of the LED.

Not the answer you're looking for? Browse other questions tagged led brightness or ask your own question.