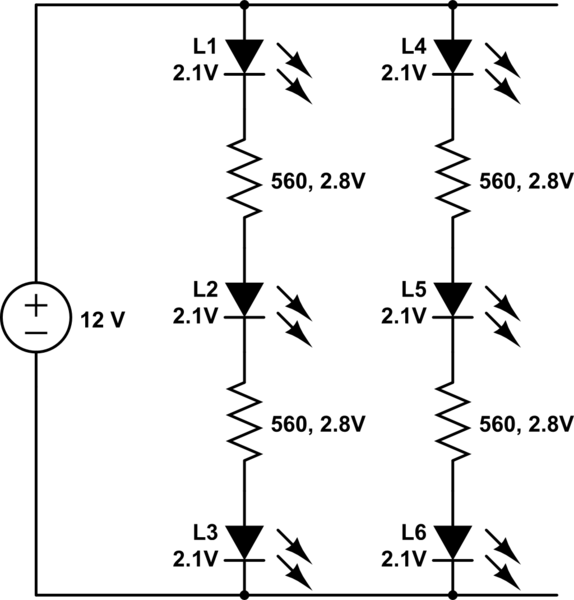 simulate this circuit – Schematic created using CircuitLab The voltage values on the schematic have been measured with a multimeter. "560" is written on the resistors.

As you can see, the resistors account for 5.6V - that makes 46% of the voltage (or power) consumed by the strip!! Is that normal?

This is normal enough. This is done because

If you care enough about the excess dissipation and if the resistors are accessible you could sort out one series resistor per 3 series LEDs and operate then from around 10V or short out two resistors and run then from about 8V. This is quite a lot of work and unlikelt to be attractive except where power use if of vital importance.

Interest only: If dissipation at 12V is 72 Watt then dissipation when modfied to run on 8V would be abpt 48 Watt - or 24 Watt less. If run "24/7 for a whole year (8765 hours) and if electricity costs 25 cents per unit then after one year of continuous use you would have saved about $50 in power costs!.

Adjust figure for actual hours/day and unit cost of energy.

If you ran these continually for 8765 hours it's likely that their light output would be much reduced. The reasons for those are the same as those at the top of this answer.

As far as I can tell from the image the LEDs use 3 die in parallel (each brought out on two pins) and then a resistor connects to the next LED in a set of 3. Each die is probably rated at 20 mA max so 60 mA for 3 - so running at 50 mA is slightly conservative which is good.

This is a very unusual design as only one series resistor is strictly necessary per set of 3 LEDs. Thy may have done this so each resistor dissipates 140 mW instead of having one only but needing it to dissipate 420 mW. This MAY be OK but it is likely that th

Note: I might buy these if I needed them if the price was right. They probably represent typical offerings. The following is re what they claim - not why you shouldn't buy them :-)

Reality: Use 5 lumen/Watt for now for "ordinary bulbs". To achieve their claimed 90%+ less they'd need 50 l/W LEDs at 100% of input energy used by LEDs.
Factor in the fact that only about 53% of the input energy is used by the LEDs and
you'd need 50/0.53 = 94 l/W.
A thin clear polycarbonate cover gives 10% light loss.
So their waterproof covering made of ??? is liable to cause 20%+ loss 20% loss means LEDs need to be 94/0.8 = 117 l/W. (Or 104 l/W at 10% loss).
Apparently identical LEDs on Alibaba advertise "15 l/W (24 l/W available").
This may allow for the cover but not for the resistors.
Even if it did allow for the resistor loss as well the effective lumen's Watt in the Alibaba case mentioned would fall FAR short of the levels needed to meet the advertised claims.

This is not untypical for this class of product. Even allowing for filtering losses, assumptions of l/W of incandescent bulbs etc (1) There is no way they meet their 90%+ claim (2) The A++ claim would be actionable legally in my country (NZ) by a government department at no cost to the complainant.

The price is an utter ripoff, but blaim the reseller for that.
I bought Chinese made 5m reels of LEDS in India retail in 3 reel lots for about $US6/reel (no remote control). Remote adds minimally. Astoundingly good.
Out of China they cost more (than Chinese made LEDs bought in India) but not vastly so. BUT if you are buying in 1's on ebay and that's the best value available and it suits you then buy them. Just don't believe anything they say :-).

The 300 LEDs in the heading and 150 in the body is (probably) due to a 12V strip heading being used for the 24v description. The 72W does not match your calcs = probably about 90W if Volt figures correct.

Yes, this LED array is quite inefficient. If that's a primary concern, don't use it. It seems the design was optimized for cost. I expect it was cheap, so you got what you paid for.

So if you have 12V, three LEDs, and 112Ω of resistance, and assuming 2.1V voltage drop across an LED, the sums work out as:

Blue LEDs have a higher forward voltage, normally - say 3.2V. Using the same components that would work out as:

Blue LEDs are visually brighter than red ones, so less current through blue LEDs is acceptable (though not necessarily "nice").

By using the same components throughout they keep costs down. Three blue LEDs is the limit for a 12V supply, so you are stuck with 3 LEDs on the red version (same PCB), and keeping the same resistors, while not "ideal", is fairly normal. Yes, it means the resistors drop more voltage on the red one than the blue one, and the current is higher, but that's a small price to pay for having very cheap LED strips.

Solder in bypasses on the first resistor on each series, and replace the second resistors with a 20R, and make sure you use a switching power supply and keep the voltage under 7V - this should dramatically increase efficiency. You can pick up a reel of surface mount 20R resistors, and set if you create a custom soldering head to "stamp" them in it should be fairly efficient to get the job done.

Another way I have done it is to buy bulk flat LED lights and wire them all up myself.

Ideally each the LED's should be wired in groups of each colour with a set resistor for each colour, or even better, each colour is run on its own complete circuit (allows for colour mixing).

Not the answer you're looking for? Browse other questions tagged led resistors power-dissipation or ask your own question.

24
Why doesn't my 5050 led strip draw as much power as I expect?
2
Put outputs of 2 computer power supplies in series?
3
Maximize efficiency and brightness of diff color, cheap, 5m 5630 SMD LED strip lighting

8
Large difference between specced values and real values for LED strips?
3
How to plug 2 5m RGB LED light strips together?
4
LED strip brightness and its measurement - did I get ripped off?
1
Question on Resistors for use with 5050 LED Strips
0
How much power should 14.4W LED strip consume?
2
WS2812B LED Strip Not Drawing Full Amperage
0
Why is 12V the standard for LED strips?
1
Help with powering LED strips from a LED TV
0
How individual LEDs in LED strips (or matrixes or cubes) are being powered when supplied with >=12V instead of 5V?