My question is with regard to establishing regulation using values taken off the characteristic curve. I have \$I_{kn}\$ = 1.8mA and \$V_z\$ = -8.2V. How can I determine the minimum input voltage for regulation to be established? 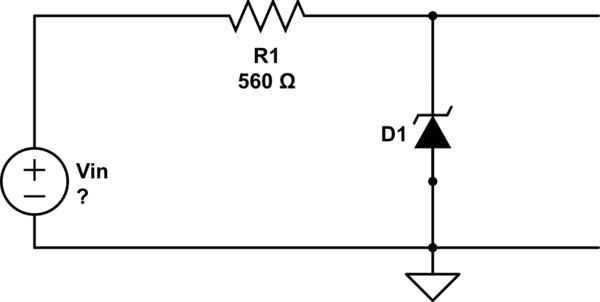 You want to avoid operating at Izk. That is the point where breakdown begins and there is noticeable change. A good place to operate at is the Izt (zener test current) which is usually provided in the datasheet.

This problem is going to depend on what you current limiting resistor is. If we assume you are operating at Izk (no load) then you first need to figure out what value resistor you are going to be using. If we assume 0.25W resistor, then

In this case, it doesn't matter a whole lot because the resistance is just high. But its a good check to do !

Now that we have that, we can just plug in the values

However this will probably only apply to the no load configuration. As soon as you throw a load on, there will be less current going into the zener. This is also why I suggested you avoid working at Izk, because if you are at boundary between reverse bias and breakdown ( a zener is only useful when its in breakdown), and you throw a load, you can put your zener back into reverse bias region.

Well you've at least got 1.8 mA across R1, even if the load (not shown) is infinite.

Try sticking some load resistors on the output.
(then you've got look on the spec sheet and see what happens when I-zener decreases.)

Not the answer you're looking for? Browse other questions tagged diodes zener or ask your own question.

3
Load lines and Esaki diodes
0
Zener diode minimum and maximum current
14
Can a Zener diode that protects a switch against inductance when the switch opens, affect turn on speed of the valve when you close it again?
5
Determine adequate speed of flyback diode for a relay
1
How to solve a simple diode gate question from Sedra and Smith (Exercise 4.4)?
0
How to use IV characteristics of a diode in calculations
0
Calculating the minimum and maximum \$R_{load}\$ for a zener voltage regulator
4
Load resistance in voltage regulator
0
Voltage across Zener diode is higher than the Zener voltage