The below diagram is the parallel MAC structure. In parallel MAC both partial product addition and accumulation take place at same time. 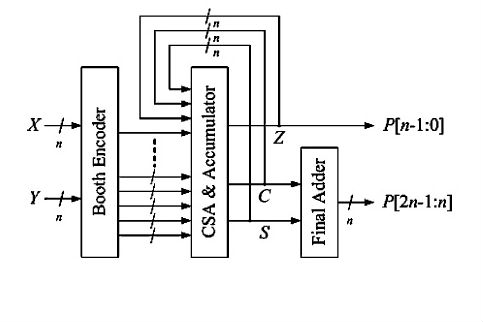 The partial product summation + accumulation unit of above parallel mac is given below. http://i.imgur.com/Jd8WIyD.jpg (link to the image). 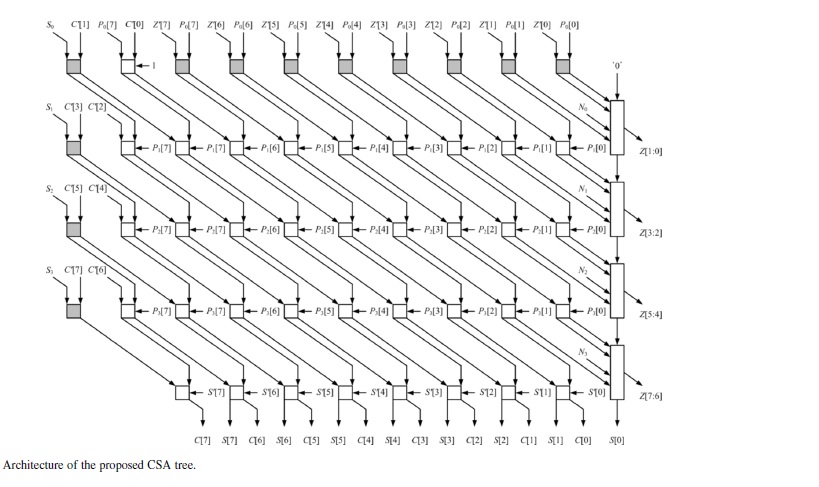 Normally by modified booth algorithm partial products generated will be of length 16 bit for 8 bit multiplication operation.Here partial products are of 10 bit.How it will give final correct answer?

The complete document is shared below.
http://www.mediafire.com/view/zoh8zuand88zkqx/05337888_2.pdf

Please share your ideas.I need to continue my project based on your replies.
Thanks.

If you multiply two eight-bit numbers, the partial products will in general be single bits. However, assuming a row-based structure there will be eight rows of eight bits each, where each row is either 00000000 or the other input.

With modified Booth encoding there will be four rows. However, as each row now will be -2, -1, 0, 1, or 2 times the other input, at least one more bit is needed (it is not obvious if your multiplier is expected to handle signed inputs and depending on how you handle the signs you may have to add another bit).

The S and N things are not obvious from a quick peek (as I do not have time to check the diagram in detail). However, N is most likely used if you should multiply with a negative partial product. Instead of computing the "correct" negative number by inverting and adding a one to the LSB position, you simply invert and add the one as N, so if the least significant digit would be Booth encoded to -1, you would get a partial product row as 11110111(-9) and the corresponding N being 1, instead of first computing 11111000(-8) requiring an adder. For S, it is probably the compensation vector. To add two's complement numbers, which the partial product rows will be as they can be negative, they would in general have to be the same length. However, using some clever tricks (mainly noting that the sign-bit has a negative weight, using \$-b = \bar{b} -1\$, and merging the -1 parts), it is possible to avoid explicit sign-extension.

Not the answer you're looking for? Browse other questions tagged digital-logic fpga computers adder multiplier or ask your own question.