What factors can determine the constant coefficient when calculating torque? 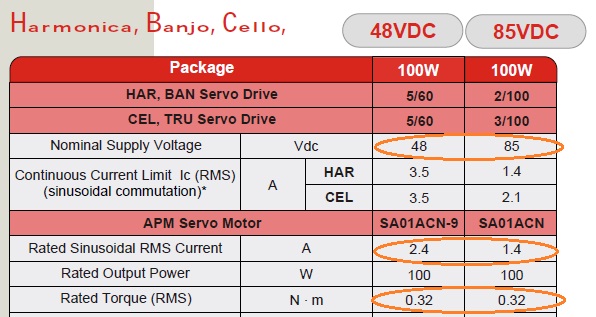 In this servo motor's datasheet, both motor have the same torque of 0.32 Nm, have the same power of 100w, but have different rated currents and voltages. It seems that the "torque" relates to the controller's supply voltage, is it true?

The torque generated by the motor is proportional to the amount of current flowing through the motor: τ = kt ∗ I ; (kt is a constant; τ is the torque; I is the current)

It seems that the "kt" is determined by the controller's supply voltage, is it true? What factors can determine "kt" when calculating torque?

(The above formulas come from this thread: How are current and voltage related to torque and speed of a brushless motor?)

First, the torque constant \$k_t\$ for a DC machine is derived as follows. If you assume a constant speed and you neglect any losses or saturation, then the power into a motor equals the power out of the motor, or \$E*I = T*\omega\$, where \$E\$ is the line to line EMF, \$I\$ is the DC input current, and \$T\$ is the torque at speed \$\omega\$. From this we can say that \$k = \frac{E}{\omega} = \frac{T}{I}\$. Let me repeat the assumptions that were made for this equality to be true:

Second, assumption #3 above poses a problem when we switch from DC motors to brushless motors because brushless motors are typically driven with either square (trapezoidal) currents or sinusoidal currents. Another issue that arises is that due to the commutator in an ideal DC machine, the EMF \$E\$ is a mean rectified EMF over all the coils in the machine. In a brushless machine, we aren't dealing with a mean EMF but rather an EMF with a waveform that depends on how the motor is built. The two ideal cases are a trapezoidal EMF and a sinusoidal EMF. Another issue that arises that in the ideal DC motor above the line to line EMF is just 1 phase while in a brushless motor, the line to line EMF be 2 phases in the case of a Wye connected brushless motor. In some cases (for example, a motor with trapezoidal EMF and driven by square wave currents), the \$k = \frac{E}{\omega} = \frac{T}{I}\$ equality still holds for a brushless motor. In other cases (for example, a motor with sinusoidal EMF and driven by sinusoidal currents), the equality does not hold.

Third, you can't calculate \$k_T\$ based on 1 data point. Typically a motor manufacturer would calculate \$k_T\$ by hooking the motor to a dynamometer and then measuring voltage, current, speed and torque while increasing the torque. They would then take a best fit line of the torque vs. current curve and the slope of that line would be \$k_T\$. This line will not go through the origin because of friction (that is, the motor requires a certain minimum amount of current to get the motor started) and many motors will not have a linear torque vs. current curve for high values of current (due to saturation). Also, generally this test is done at room temperature and it is done quickly to keep the temperature of the motor as close to room temperature as possible. The ratings in the chart above would have been performed with the motor windings at a high temperature (at the rated temperature of the insulation).

Fourth, why did I tell you all of that? Because most people when dealing with brushless motors assume things about \$k_T\$ that aren't true. Most often they treat it as the same as a DC brushed motor with a commutator. They also neglect losses due to friction and saturation. The other issue is that there really is no standard definition of \$k_T\$ in the industry. It could refer to the line to line or the line to neutral value. It could refer to the RMS or the peak value.

Fifth, if you forget about \$k_T\$ for a moment (since you aren't given enough information in your chart to determine \$k_T\$ anyway) your question boils down to "If 2 motors have the same rated torque but different input currents, what determines that input current?" Your intuition that it has to do with voltage is correct. If you increase the current from 48 V to 85 V, then in order to maintain the same input power, your current will decrease by the ratio \$\frac{85 V}{48 V} = 1.7\$. You'll see that that the current does indeed decrease by that amount \$\frac{2.4 A}{1.7} = 1.4 A\$. Motor designers have a rule of thumb where if have a motor design and you want to increase the voltage by a certain ratio, then all you need to do is increase the number of turns by that ratio and decrease the wire area by that ratio. Doing that changes the resistance by the correct amount but keeps the flux in the motor the same.

The torque (stall torque) is related to the ampere-turns. A higher voltage motor will be designed with more turns and will be capable of less current, so the stall torque is roughly the same for a high voltage low current motor and a low voltage high current motor capable of the same output horsepower at the same shaft RPM.

As you've noted, output power from the motor is proportional to omega, so if the shaft is not turning (\$\omega = 0\$), the output power (from the shaft) is necessarily zero- all the input power is turned into heat.

You see the same thing in relay coils- the power is roughly constant for different coil voltages, for a given overall design of relay.

Not the answer you're looking for? Browse other questions tagged motor servo brushless-dc-motor or ask your own question.

40
How are current and voltage related to torque and speed of a brushless motor?

0
Question about Intermittent Torque Zone and Rated Voltage
1
How can brushless DC motor has constant torque?
1
Acceleration time of unloaded motor
0
How to run an electric motor at constant current?
0
DC motor speed and torque circuit equation, why is the current changed while voltage constant?
4
BLDC Motor Constants: Why is my Kt and Ke different?
0
BLDC Motor rotor vibrates with audible high pitch beep, but does not spin. Controlled by custom motor controller
2
What happens to the torque/speed curve of a brushless motor when I increase the voltage?
2
Can a DC brushless motor produce the same torque at different power levels?
0
How can this BLDC motor have constant torque over its RPM range?