I am currently involved in an academic project which the topic is to design a Digital Tuner for Electric Guitars. My knowledge of electronic is very basic, so here I am.

I need to pre-process the signal that goes out from the pickups of a common electric guitar, let's consider passive pickups so....we have an output voltage from 200mV up to 1V of peak, with also negative peaks (of the same magnitude).

I have to use the STM32F4 (Discovery Board), so I need a very simple circuit that drives the On-Board 12-bit ADC, that takes, as inputs, signals with voltage between 0 and 3.3V. So I have to design a pre-amp circuit that amplifies and clamps the guitar's output.

I want to underline that I have never realized an electronic circuit (a real one, not in the simulator) before. I am wondering about: 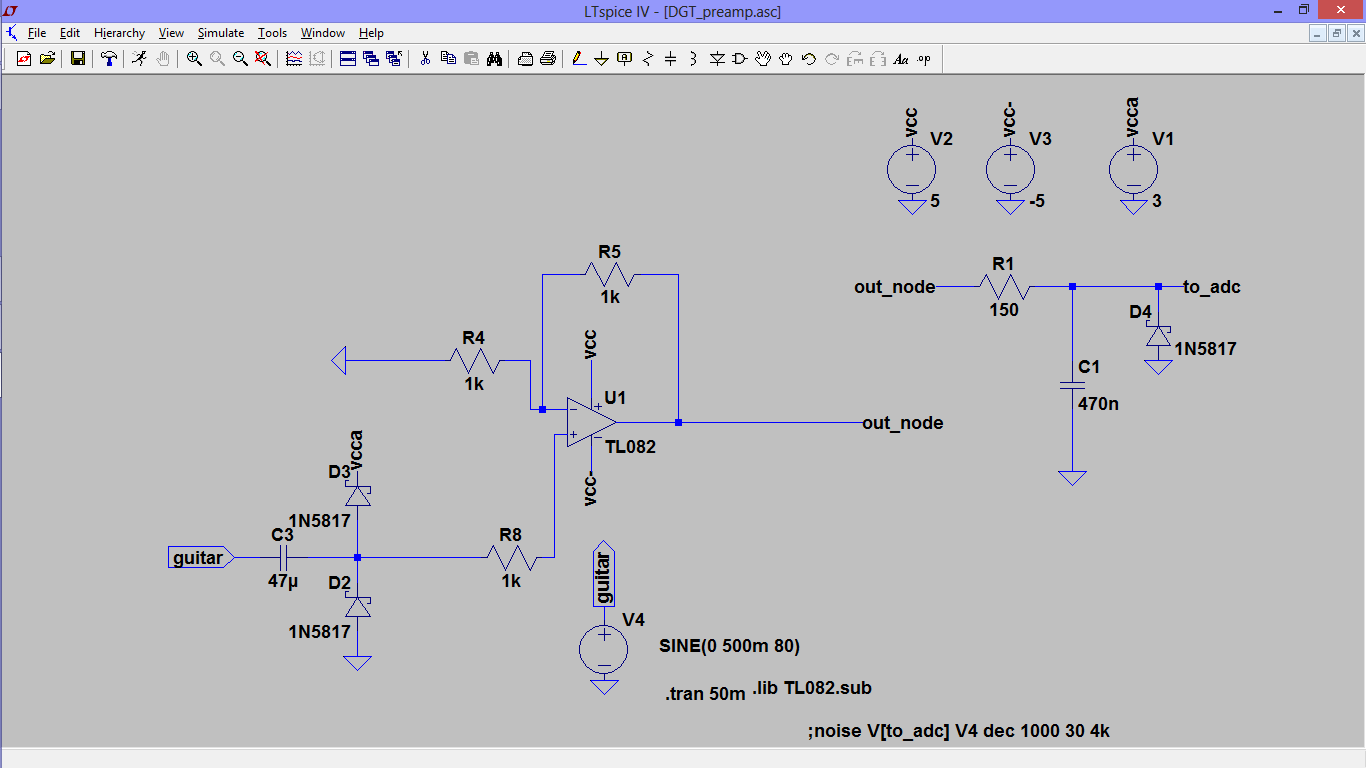 Here's what I did, in a very similar situation. Not a tuner, but a digital effects pedal. Firstly I'd personally suggest using a 9v battery for the analog gain stage, because the output of the guitar can actually be quite high, and it saves you a couple of diode clamps on the input. In a real product of course, you'd add them in anyway, and I've pictured them because you said you didn't know about "clamping" and it's pretty important if you want your electronics to survive unexpected scenarios. In any case the TL082 won't like only a 5v supply.

The following circuit will provide some gain (set by R1 & R2), with a single-supply op-amp, and an output biased to half of the microcontrollers' supply.

I haven't included any anti-aliasing for your input because for a guitar tuner application you can probably do that in software with little trouble. Also there's 11x gain in the op amp, which might be more than you need. Hard to say - and again having an overdriven signal for the tuner also might not matter. The two diodes are essential, you run a real risk of destroying the ADC in the micro without them, because if you drive your guitar hard you could easily see a couple of volts out of it, which the op amp will turn into tens of volts (well, 9 volts because of the battery, but still..), which won't end well.

The op amp is configured for an AC gain of 1+(R2/R1), but a DC gain of 1, because of the capacitor C1. Making C1 smaller will make the amplifier act like a highpass filter too, which might be useful.

In my case I actually had a FET input stage and three anti-alising stages before this amplifier, but like I said I think that would be overkill. The FET input is just for tone really, and in a tuner that doesn't matter.

Guitar can put out 2-4 Vpp if you really bang on it just right. But if you're tuning, the range would be limited to no more than 200-400 mVpp I think. 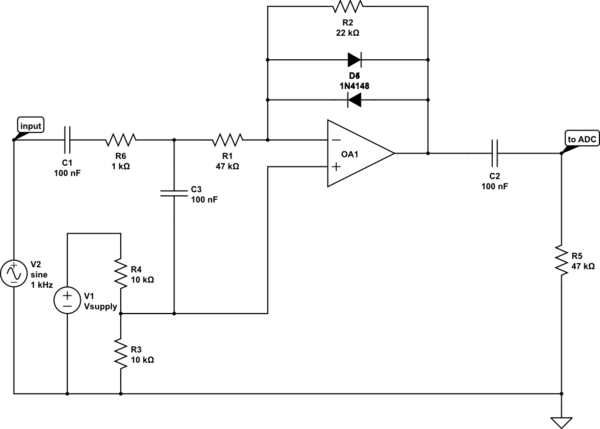 This uses a bandpass input with an inverting op amp to step down x0.5 and the diodes should limit the output to about 1.2 Vpp. It uses a virtual ground for use with a single supply which would depend on the op amp. There are op amps that run on 3.3 V that are more than good enough for this type of application.

But for just a tuner, you could also probably skip the op amp entirely and just use the bandpass filter (everything up to R1 but make it a voltage divider) in front of the ADC.

Note that the bandpass has an upper corner of only 1.6 kHz because that's about the highest note you can fret on a guitar.

Note that the filter might be an important part of the tuner itself. Meaning you might find that it is advantageous to high pass or severely low pass the input.

Note that the magnetic pickup of an electric guitar needs to be loaded with a high impedance. A piezo pickup (often used on acoustic guitar and instruments such as a harp) has a requirement for even higher impedance input stage. A 1 Meg Ohm load impedance for both devices is common.

I'm going to suggest that you have a look at schematics of something called a "Direct Input" box (also known as a "DI Box". This is a device that connects to a guitar or similar instrument and conditions the signal so that it can be connected to the low-impedance input of a typical mixing board.

Google has a couple of million hits on the string "di box schematic".

Not the answer you're looking for? Browse other questions tagged operational-amplifier filter stm32 or ask your own question.

2
Simple, passive way to remove high frequency interference from low power audio
1
LM324 Pre-Amp For Mic (to PC) Not Working
1
Help correcting a circuit piezo ADC
5
Reduced output of op amp peak detection and hold circuit
3
How can I attach an analog to digital converter to a guitar
1
stm32f4 vdd and interfacing input pins
0
Differential gain of an op-amp and feedback
0
Reading a negative and positive voltage from an STM32F4 ADC
0
Op - Amp and Unbalanced Input Differential Signal
0
Band pass filter with single-supply op-amp not filtering