Most generally I'm looking to design a UPS for a low power DC device given higher voltage AC current, with storage handled by a supercapacitor, or a bank wired in parallel.

For my specific case I'm looking to power a RasPi driven from 24VAC 3 Amp HVAC transformer with backup from supercaps in the 2.5V - 3V range.

Some similar commercial products exist, the closest being Juice4Halt, and several LiPo (UPiS) products exist, and more general battery driven options have been questions on this site before. I'm only aware of one project using supercaps, but they're wired in series and between need for capacitor balancing and not using a boost converter the usable time on backup power is more limited than possible and inefficiencies can be reduced. I'm wondering what the most efficient topology for this system would be.

Currently the two methods I can think of each have relative values and I don't have the experience to pick the best, or to know if I'm not thinking of a better idea. 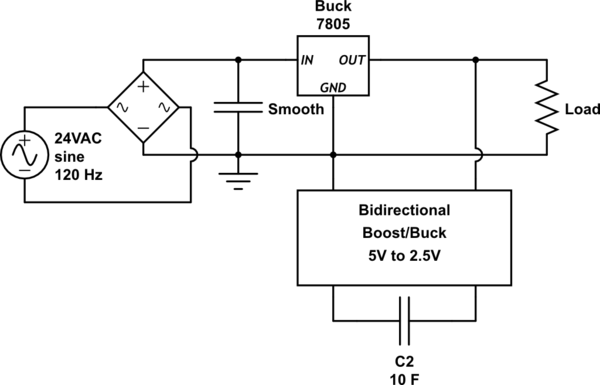 My expectation is that the second version would be more energy efficient assuming the power source was generally available, but that the first design would work better given a blackout or brownout situation.

Which one would be the most efficient considering both energy usage and power factor? Would either one be more likely to work as expected in most situations? Would either design cause power issues for the load device (RasPi) while the caps are initially charging? Anything else to watch out for/gotchas to know about?

Your first schematic is pretty straightforward to make, and will most probably work fine. The decrease in efficiency is not that important when you're running on mains power. The second one will be trickier to implement.

For either design, you won't be able to use the cheapest boost converters available, because the most widespread are made for the Li-Ion voltage ranges (i.e. they boost 3..5V to 5V).

Yet another issue with supercaps is that they often are just gloryfied RTC backup batteries with recommended discarge currents of order of 1-10 mA and internal resistance of 1-10 Ohm. Pulling 0.5 A from such caps will result in permanent damage. Carefully read the whole spec before buying, don't just check capacity and voltage and assume everything else will be fine.

I still suggest you consider a Li-ion battery as the cheapest and most effective solution. That's what I use in my Banana Pi, which exposes Li-Ion battery pads on the board and requires no extra parts (besides the battery itself) to have back-up power.

Here is a complete description of a design that includes handling brown-out and shut-down. (And why are you not checking Hackaday morning and night out of habit?)

Not the answer you're looking for? Browse other questions tagged power-supply voltage-regulator raspberry-pi ups or ask your own question.