I want to be able to create simple oscillator circuits for clocking in digital circuits and am wondering what is the most simple design people know of?

I could use a simple ring oscillator which is pretty simple

but this would run way quicker than I want - ideally looking to hit around 0.1Hz to 10Hz.

At the moment I have been using a bi-stable oscillator like this: 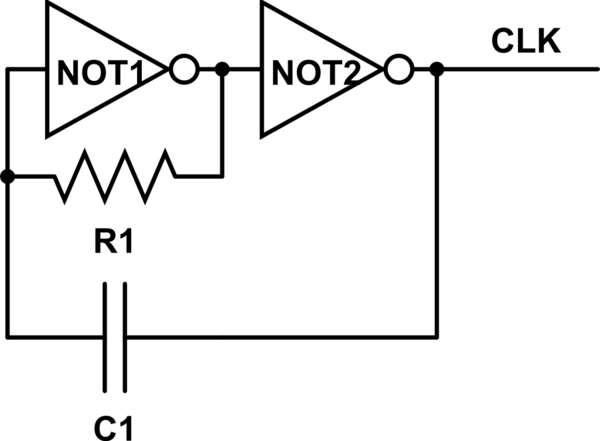 This works well and I can control the frequency by varying the capacitor and resistor values, I am just wondering if there are better/simpler schemes? Specifically I'd like ones without the passives, but not using anything more complicated than basic logic (NOT, NAND, NOR etc).

Any contributions/ideas would be great, thanks!

If you don't want to use passive components, here is an all digital solution. I realize using the counter chips goes beyond your desire to use only basic logic gates (NAND, NOR etc.), and indeed one can construct the counters used below from these elements, but the complexity would make it impractical.

Take your first oscillator, and add two more inverters. The typical propagation delay ttpd of a 74HCT04 inverter is 14 ns. This will result in an output frequency of approximately 70 MHz (which I simulated in CircuitLab). The reason for using the lower frequency is two-fold; it allows a greater choice in parts for dividing down (for example the 74HC4024 part below has a maximum frequency of 90 MHz), and 70 MHz divides down closer to 1 Hz than 120 MHz using binary counters.

This would take three IC's -- the five inverters in one 74HCT04, and the two counters.

I would strongly suggest using a CPLD for this task. The CPLD chip alone will take care of everything you need in 1 IC, for a very cheap price.

As tcrosley mentioned, using 5 NOT gates in series will get you about 70 MHz, and from there you need to divide it down. It almost certainly won't be 70 MHz though and will depend on which CPLD you select if you do and you'd of course need to calculate based on its respective propagation delay.

From what I have heard, CPLD's typically contain 1 flip-flop per macrocell, thus you need at least 29 macrocells.

In fact one of Lattice Semi's cheapest options which comes in at $1.20 per chip has 32 macrocells.

And last but certainly not least, you can easily change the design and thus frequency of your oscillator by simply uploading new code, no need to rewire anything.

And actually in this case you wouldn't even need to use any logic elements to create the inverters as many CPLD's already have clock elements on them. Just code up the clock to connect to your chain of dividers and send the output to your I/O.

Not the answer you're looking for? Browse other questions tagged oscillator inverter or ask your own question.