I want to start building a tube headphone amp from the details on DIY Audio Projects, but I'd like to understand what I'm doing there too. 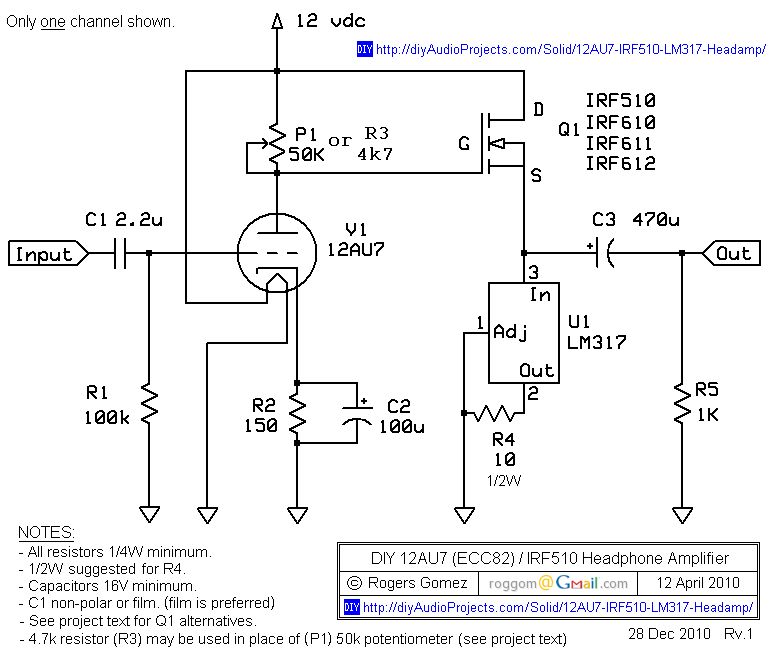 While I get most of it, I can't understand why the LM317 is placed after the output MOSFET and not before it. Can anyone shed some light on this choice?

The LM317 in this circuit is not being used as a voltage regulator. It's being used as a constant-current load. It's set up with a resistor in such a way as to always draw a constant amount of current from the MOSFET. In that configuration, the current flows through the LM317 In-to-OUT-to-ground.

But if the LM317 was set up in its normal way as a voltage regulator, then you're right, the supply would go to IN and the MOSFET would be connected to OUT.

Not the answer you're looking for? Browse other questions tagged mosfet amplifier lm317 vacuum-tube or ask your own question.

3
Piggy-backing off power amplifier outputs
7
Can someone explain this tube amplifier circuit for me?
2
How can I reduce B+ from 460VDC to 420VDC in the power supply of a tube guitar amplifier?
4
MOSFET driver for digitally controlled, battery powered boost converter
0
Vacuum Tube Tesla Coil (VTTC) schematic interpretation
5
Controlling MOSFET's resistance using negative feedback
0
Using MOSFET to turn on/off auxillary electronic circuit
9
How does this transistor (pre-)amplifier work?