Need help with OpAmp and FET choice for a VCVS

I adapted a circuit I found online (see the first picture here) to my application: 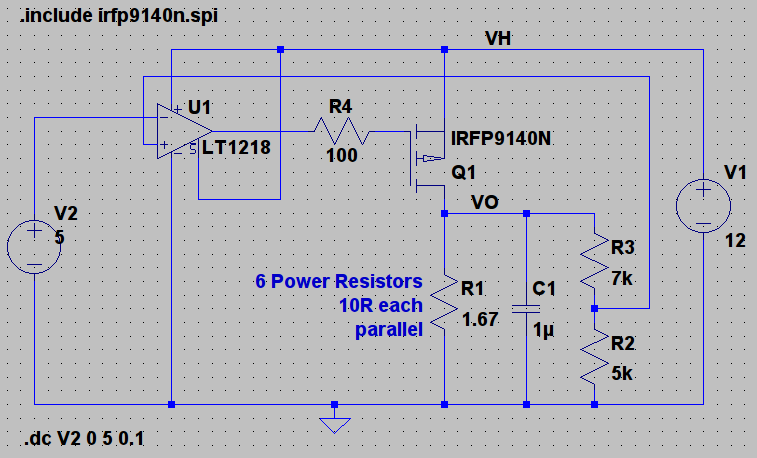 The output voltage is scaled down to the DAC range by R2 and R3 and fed into the OpAmp, which outputs Q1's gate volgate. So I had to pick an OpAmp and ended up with the LT1218. I basically went through the list of available models in LTspice and this one fit my supply voltage (\$V_1 =+12\,\mathrm{V}\$) and has rail-to-rail inputs and outputs. There are probably better choices.

I'm not sure if R4 is necessary. I've seen it in many circuits and people seem to include it in order to limit the OpAmp output current.

Does this circuit look reasonable given that

This is my first attempt at using an OpAmp in a real circuit, and I've also never used a transistor for something other than switching a load on and off. I'm very happy about advice regarding both components.

As suggested in the comments, I simulated a step in VC (V2 in the picture above) from 0 to 3 V and the result is rather disappointing: 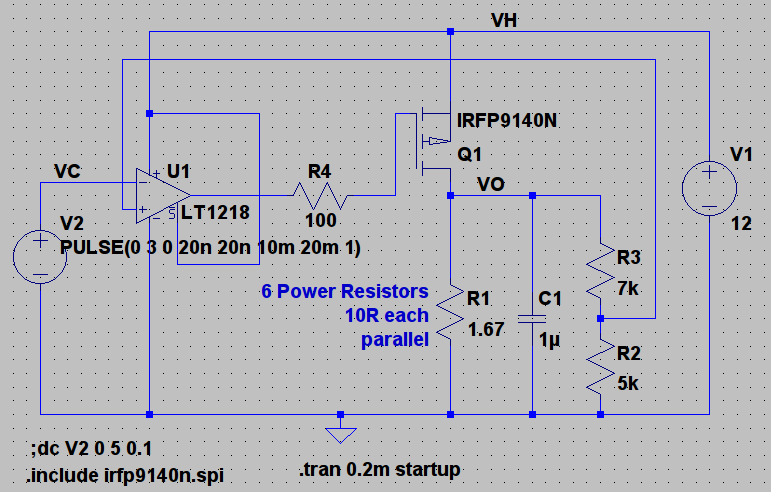 So first of all, the output voltage needs some time until it rises to a value limited by Q1's \$R_{DS,on}\$ and then falls down to roughly the desired value (\$12*3/5=7.2\,\mathrm{V}\$), but swings. The initial overshoot might not really be a problem in the real application; what concerns me more is the fact that I don't know why that happens.

The plant is too slow for the OpAmp, so I'm now basically looking for a way to make it appear faster?

Adding the suggested capacitor between the OpAmp's output and negative input as well as a resistor in the control voltage input was very effective. 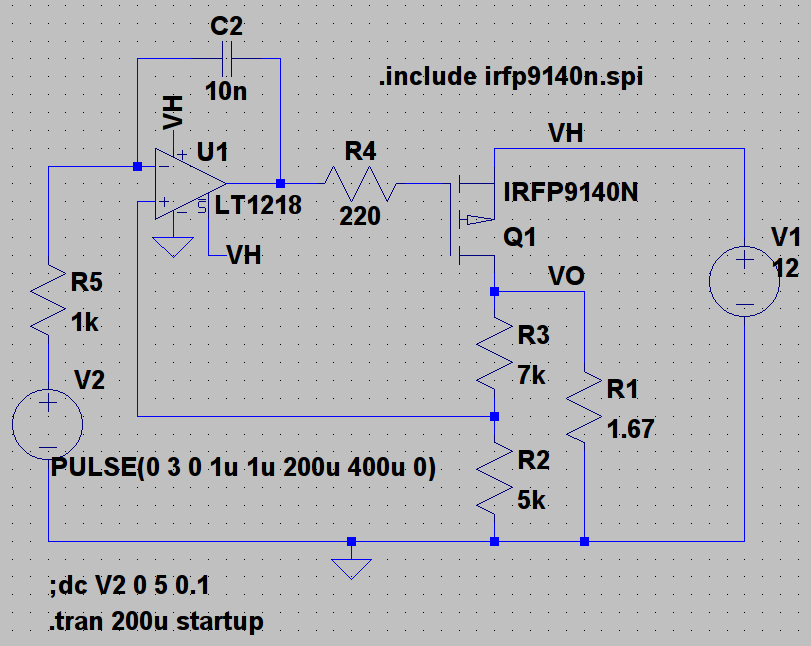 The output settles after about 150 µs:

"swings": I couldn't get VO to settle at the desired voltage, even with different values for R4, R5 and C2.

I've build the circuit with an IRFP9140N and an AD820A, with all resistors and capacitors as shown in the last circuit diagram, and it seems to work as desired.

Overall, with the mods discussed for stability, I think this is a fine circuit. You need an op-amp with rail-to-rail output (or close) but everything else is pretty non-critical.

I approve of the use of a 180W-capable MOSFET in this (linear) application. You could certainly use a BJT or a Darlington (or a Sziklai pair) but there's not a lot of reason to at that power level.

Similarly the op-amp may be slightly overkill- you could probably use a cheaper one, or an even more expensive precision one, but that one should be fine. There's more compromise in using op-amps with R-R input than output, and it's unnecessary in this case, so I suppose that's a point that could be improved.

I think it's a great first shot though, and don't forget power supply bypass capacitors when you build the real circuit. Good work!

This is a one quadrant sort of a thing, which means that it supplies one polarity of voltage and can source current. As such it is asymmetrical, while the output can be pulled up by \$Q_1\$ it relies on the output load to pull down. So, load becomes very important to all dynamic behavior.

Overall the circuit is like adding a buffer that has voltage and current gain to an OpAmp. That buffer is inside the feedback loop of the OpAmp. So, that new buffer sees all the open loop characteristics of the OpAmp. Also, the OpAmp bandwidth will have to be less than the 3dB bandwidth of the buffer. Note: when you added \$C_2\$ around \$U_1\$ that reduce \$U_1\$ bandwidth to be compatible with the \$Q_1\$ buffer. Also you got rid of \$C_1\$ (apparently) which increased the bandwidth of \$Q_1\$ buffer.

It's a bit rough, and I'll let you figure out how it is that the first of the 2 poles shows up at about 100kHz, but you can see right away that the DC gain of the output stage will be:

Some thoughts about choosing \$Q_1\$

As to the OpAmp

Not the answer you're looking for? Browse other questions tagged operational-amplifier mosfet voltage-regulator or ask your own question.