I am trying to design and build an antenna + LNA board. 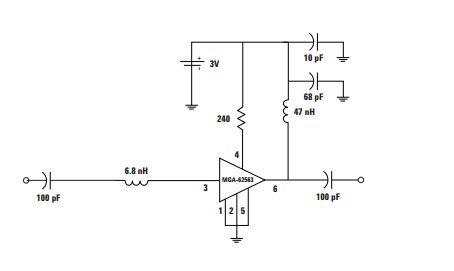 My Question is basically why isn't this working? Am I missing some vital piece of information I have no considered? Given that the circuit is designed for 500 MHz I would expect lesser performance with a 168 MHz signal, however I am unable to pick up any signals.

My test setup consists of an RF generator with an antenna attached, and a network analyzer with this antenna design attached. These two components sit a few feet apart.

I believe all of my soldering connections are correct, and I have confirmed that the board is receiving the appropriate amount of power. 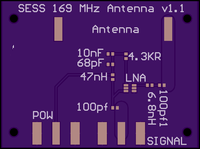 So to recap, I receive no signals on this board even when I am blasting on my RF source right next to it. I have tested other antennas to verify that the broken piece is indeed this new antenna design. Could the mismatch between the frequency used to build the recommended circuit and the frequency my board is running at really eliminate all signals? Or is there some aspect of antenna design that this novice is glossing over?

Any thoughts would be appreciated!

Per the suggestions below, I have modified my design to remove the ground pour and add the suggested traces to the Antenna. My new design is below. How do we feel about this. I should also state that I tested my board with the antenna placed vertically to get it away from the ground plane and I added a short wire tail to it to mimic the suggested trace outline and it gave me a signal! 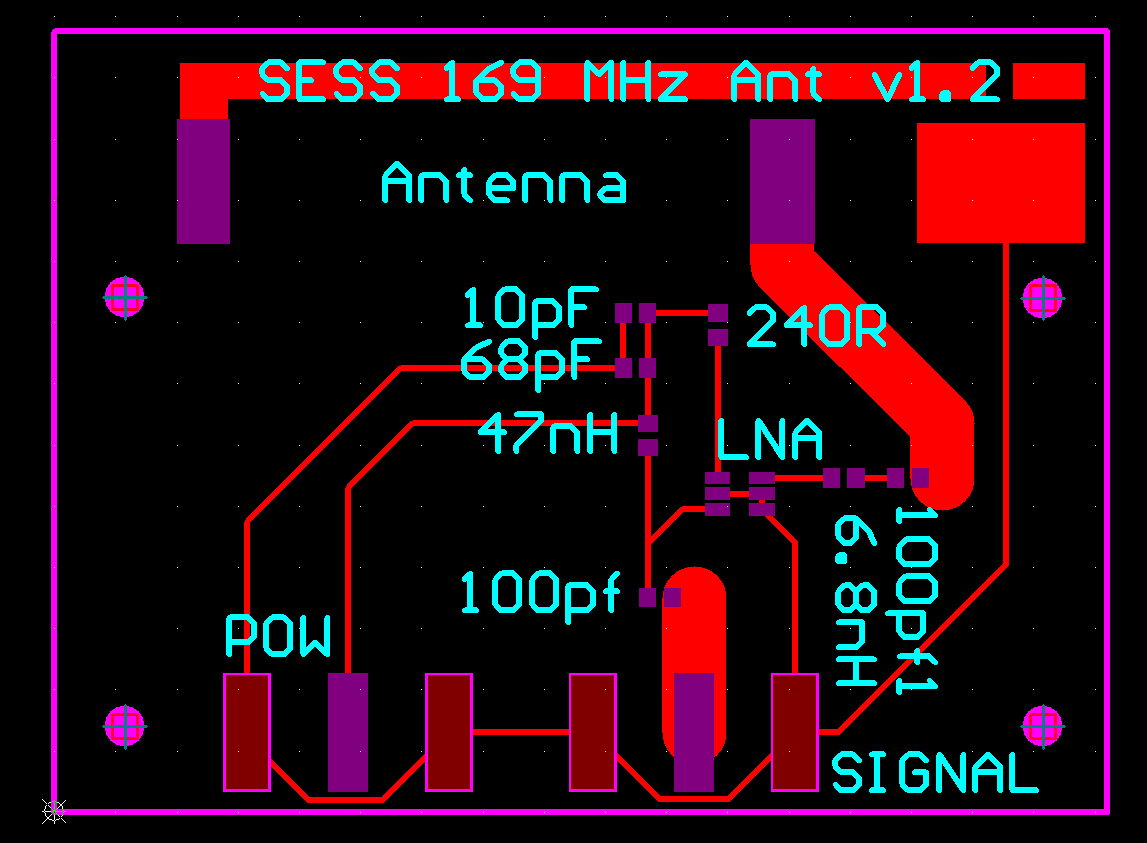 You have a ground plane covering the entire top layer? I hope you took that into consideration when designing your microstrip transmission lines. Also, you really need to tie the top and bottom ground layers together with a bunch of vias.

I won't pretend to be an expert, but that layout looks quite horrible to me. In particular, the output trace has a odd 45° join that I cannot see any reason for, and the stub to the 47 nH inductor is a bad idea.

You should rotate the amplifier 90° counter-clockwise, so the signal travels straight down from the top input to the bottom output. Right now, the signal makes two 90° turns for absolutely no reason.

Also: Place the bypass caps as close as physically possible to the device.

Furthermore, you have a bottom ground plane (the bottom layer pretty much has to be a ground. It is a ground, right?) That being the case, why are you routing any ground traces?

As an example, here is a mini-circuits eval-board for a similar part: 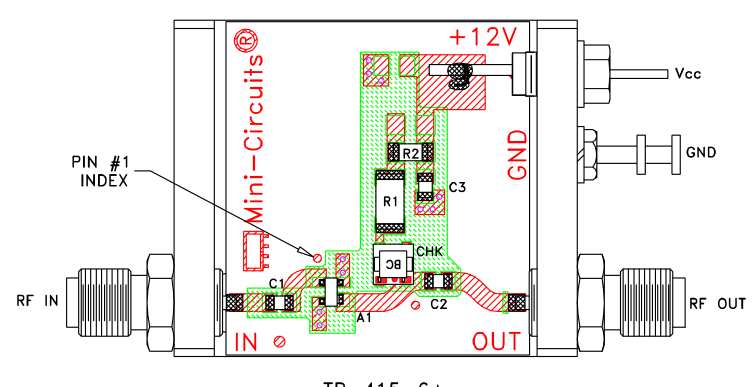 Some things to note:

The controlled-impedance trace is routed right up to the part. If you have to reduce the trace to connect to the part, do it as close as possible, and ideally have a gradual taper.

Here is another, similar eval board:

In this case, the amplifier is in a SOIC-8 package, but the same things are true. There are 14 vias just for the amplifier!

In general, I'd say avoid the top copper pour unless you absolutely need to have it for properly controlling impedance. The top copper results in something called a coplanar waveguide, which means you can get away with slightly narrower traces for the same impedance, but it also means you need to tie the two grounds together.

Here is the eval-board for a mini-circuits SP6T RF switch that uses coplanar waveguides: 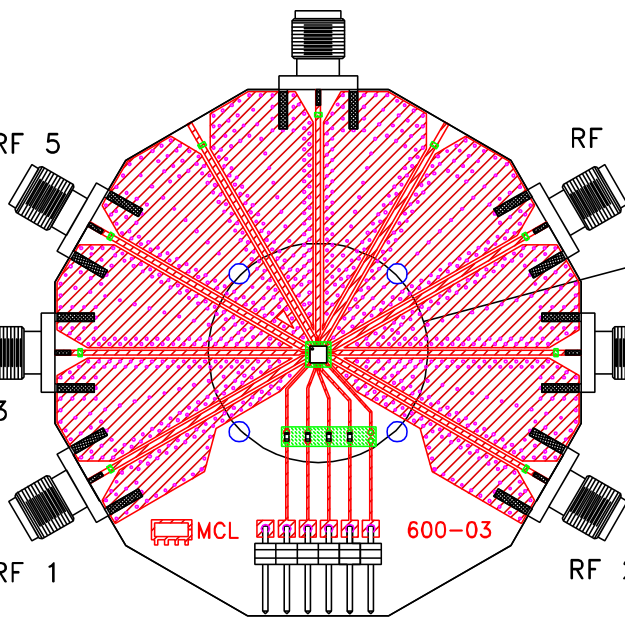 Note the MASSIVE number of vias. This is called "via stitching", and is required for proper RF behaviour when using coplanar waveguides above a ground-plane. 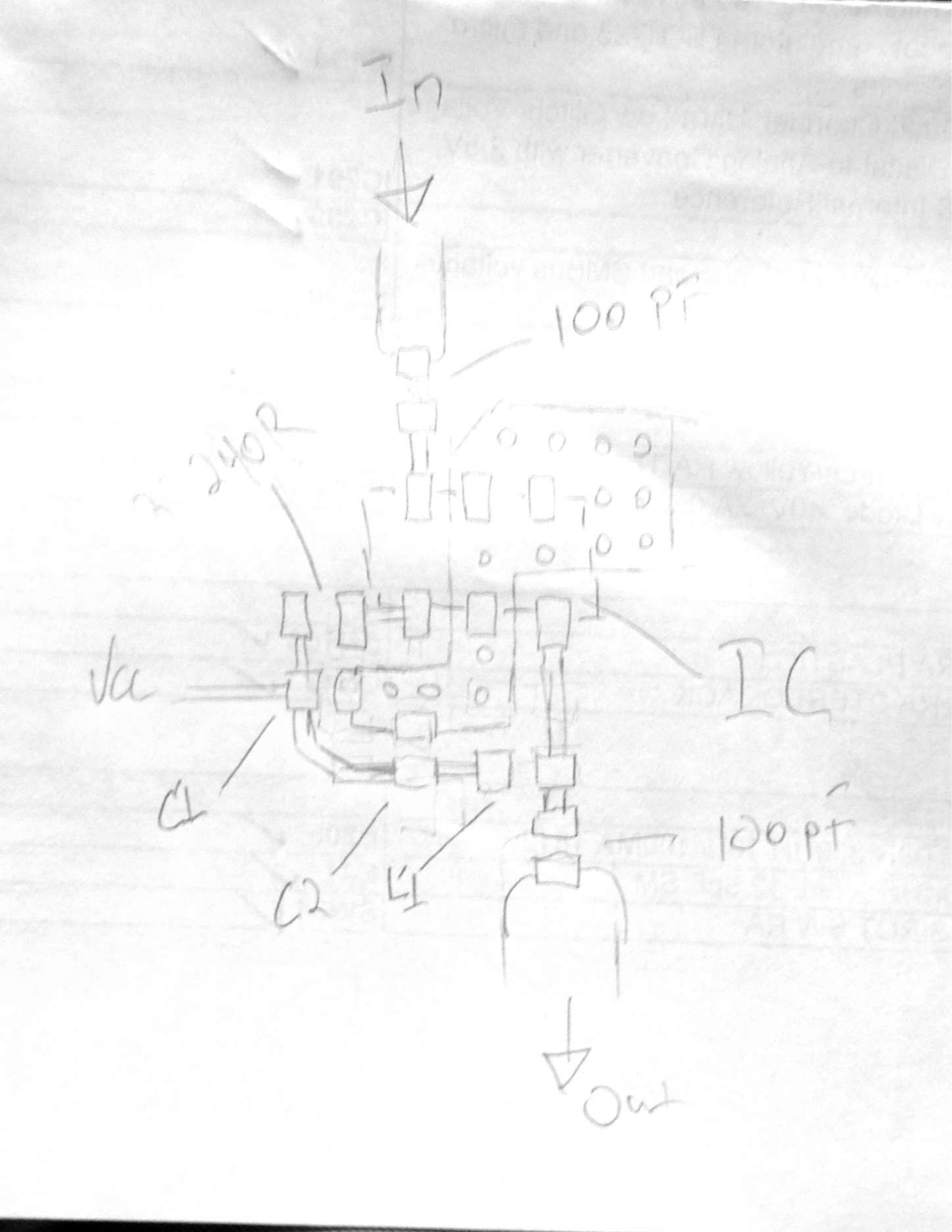 It's crude, but it's a first-past at how I'd lay out that board. I don't pretend to be an expert, but I've had decent success with the boards I've done.

Critically, the grounding is important. It's pretty difficult to have too good a ground, but it's easy to have too poor a ground, so err on the side of "Ground all the things".
The one potential concern here is that grounding like this can cause issues with soldering during assembly. I've done even more aggressive via stitching, and assembled the resulting boards without issue using the hot-plate reflow practice, but depending on your assembly process, the huge thermal connection to the ground-plane could be an issue for solderability.

Are your antennas mounted on the recommended evaluation PCB? Have you checked the gain of the amplifier? It shouldn't be much less than the stated gain at 500MHz.

You need to consider the link budget. IE, what is the signal generator output, the amplifier gain and the sensitivity of the network analyser. A couple of feet is going to result in significant attenuation. See http://www.radio-electronics.com/info/propagation/path-loss/free-space-formula-equation.php

The antenna gain is not stated. Typical gain for chip antennas, maybe -15dbi. Throwing that in the calculator suggests 47db loss at a 1mtr separation.

Your PCB layout does not look anything like the reference layout given in the antenna documentation. You have a solid ground plane under the antenna, and you have one end of the antenna chip shorted directly to ground.

Note that in the reference layout, the only part that's grounded is the 7mm area in the lower left that the shield of the cable connects to. All of the other copper areas are isolated from ground — in fact, they are actually functional parts of the overall antenna assembly, and should be duplicated as closely as possible. Any ground "pour" on your PCB should be kept well away from them.

Not the answer you're looking for? Browse other questions tagged amplifier antenna or ask your own question.

8
Antenna matching network. What? Why? How?
1
How can I amplify 868MHz transmission done with a wire antenna?
3
Will this PCB trace GSM antenna be affected by EMI?
2
LNA design question - series drain inductor
0
How to design a feed line for a single wire antenna
0
Antenna Design for Omnidirectional transmission
1
RF Antenna Matching circuit and PCB design for 868 MHz SigFox device