I've posted different question similar to this, yet still struggling to understand the theory. So here is another attempt to understand as to way two power sources(with different currents) connected in series cannot power a load without any harm? Or if it can, why can't the currents add up and the voltages? 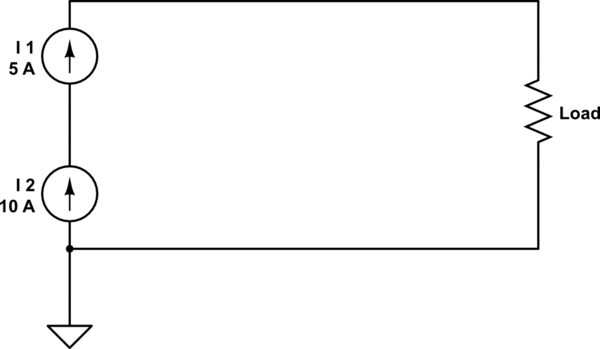 Although I've learned that current can flow to the load but at 5A(the lowest), why not 15A?

It is a basic rule. The physical basis for it is as follows. Current is just moving charges. Charges cannot accumulate. That is, objects generally cannot acquire a net charge. That is both a physical rule (rule of the universe) and also a rule for circuit analysis. So every time charges move into one side of a conductor, an equal number of charges has to move out on the other side.

I hope you find this to be a satisfactory answer. I have tried to be accurate but intuitive. There are lots of analogies that could apply also (cars on a freeway, or skiers getting on a ski-lift or something). Let me know if you want me to offer something of that nature.

Why do folks have such trouble with current sources?
In the following voltage-source circuits, most folks see easily the incongruity:

simulate this circuit – Schematic created using CircuitLab You just don't do this with voltage sources - you get heat and sparks and dead batteries or possibly explosions.
Your series-connected current sources are the current-source equivalent to this situation.
Current source "prefers" to see a dead short for a load.
Voltage source "prefers" to see an infinite resistance (open) for a load.

Current sources must have a place (a load) to shove electrons
Voltage sources only supply electrons if they have to.

The above answer given (by mkeith) is quite good. I think you can also see the problem logically.

By taking two current sources of different current values you are contradicting yourself.

But then again by your next action i.e.

It violates KCL since if we take a point in between the centre of two current sources(i.e)node at the centre then by applying KCL convention it either results in -5 or +5A.Exactly speaking the current value is not equal to zero,this results in violation of KCL.Since Kirchhoff's law is a universally accepted one for lumped circuits this kind of physical connection is not at all possible.

This will lead to disaster, or whacky behavior. You are asking to violate basic physics. Kirchoff says the sum of currents at a node is zero. The node between the two current sources is in a tough spot. Current is way of counting charge carriers passing a point. In one seconde, the 10A source pushes 10 coulombs of charge. The 5A source pulls 5 coulombs away. That doesn't add up, though briefly a positive charge may build up before the circuit malfunctions.

With real world devices, perhaps one current source will puff smoke and smell bad, leading to an open circuit, or perhaps the 5A source may "win" by limiting current to 5A with the 10A struggling, but acting like a piece of wire.

Note that a current source does nothing if not in a circuit - so there should not be any assumption about a current source always has its specified current flowing. A voltage may develop across it, in hopes of pushing charge to make current, but there's only so far a realistic current source can push.

Current source may be put in parallel, however. That is analogous to stacking voltage sources in series.

Imagine that one has a loop of inelastic pipe which allows water to flow without friction except at one point, where flow is proportional to pressure difference.

If only the 10g/min pumping engine were present, the pressure difference between its upstream and downstream sides would be whatever was necessary to push five gallons of water per minute through the constriction. The tighter the constriction, the greater the required pressure difference, and thus the more energy the pumping engine would have to add.

If the 5g/min engine were added in parallel the other way, half the water pumped by the 10g/min pump would go through the 5g/min engine. This would mean that the constriction would only half to pass half as much water, and would thus only produce half as much back-pressure and dissipate a quarter as much energy as it had with just the 10g engine. The amount of energy the 10g/minute engine had to add to the water would be half of what was necessary when it was operating alone, and the 5g/minute engine would actually extract energy from the water.

The problem with wiring the engines in series is that any water which flows through one must flow through the other; if 10g/minute flows through the upstream engine but only 5g/minute flows through the downstream one, that would imply that 5g/minute must somehow be accumulating in the pipe between the engines. Since water is very slightly compressible, such a thing might be possible for a brief moment, but the more water accumulates there the greater the pressure of the water there. The 10g/minute engine would have to add a very-rapidly increasing amount of energy to the water, and the 5g/minute pump would have to extract almost all of that energy from the water. The amount of energy transfer would rapidly increase until such time as the increased pressure prevents the 10g/minute pump from handling its full 10g/minute, causes the 5g/minute pump to let through more than 5g/minute, or causes the pipe between the pumps to fail.

As with the water in the above example, "electron-stuff" is very slightly "compressible". It doesn't take a very large excess or shortage of electrons, however, to build up a really huge amount of "back-pressure". If electrons are entering something at a rate of 1 amp, they are going to have to leave at the same rate; at a current of 1 amp, even a microseconds' worth of excess electrons would be a lot.

Not the answer you're looking for? Browse other questions tagged power-supply current series or ask your own question.

1
efficiency problems connecting multiple solar panels
8
Operating a Switched Mode Power Supply without a Load
3
Equal voltage sources(different current capacities) opposing in series?
1
Are my zener concepts wrong?
0
Why is a MOSFET in series with a power rail, with the gate connected to ground?
1
Current at different points in a DC boost-converter
0
Why is there current flow in the sub-circuits?
1
non-technical understanding of current flow behavior
2
Understanding constant current circuit