Why does there seem to be a missing component in many PCBs?

I've seen some PCBs were some components have been sketched, but they don't seem to be mounted on the board. See, this image (of a PlayStation 2) where the transformer has been drawn: 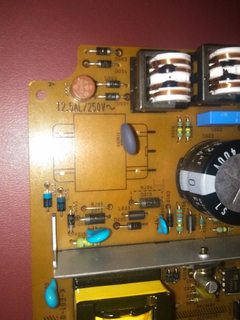 Why is this done on some circuits?

There are a couple of possibilities. One is that they're using a single PCB for multiple designs.

Another (that's still technically sort of the same idea, but mostly different in practice) is that they started with one design. Then (for example) a new part became available that (for example) integrated more functionality onto an IC, so some of the passive components that used to be required aren't any more. For example, a part that required external pull-up resistors might be replaced with one that's otherwise identical, but has internal pull-up resistors. Your board has spots for pull-up resistors, but with the new part you get exactly the same functionality by simply omitting them.

It's mostly a question of balancing the cost of designing a PCB against the increased cost of producing the design using the existing PCB design.

For example, let's assume it costs $500,000 to design a PCB, and by designing a new one you could save $1 on each finished item. Obviously you need to sell at least 500,000 of the modified design for the re-design to break even. If you're selling fewer than that, you're better off sticking with the existing design.

In addition, most suppliers give (often substantial) price breaks for producing a larger number of identical items. For example, let's assume you have two designs and expect to sell about 5,000 of each of those designs. All else being equal, one of the PCBs should cost $1 less to produce than the other--but if you buy 10,000 of a single design you get (say) a 10% discount. In this case, if each PCB costs at least $10 to produce, you end up saving money by using the same board for both designs.

Having fewer PCB designs also simplifies production. You only have to track one part in inventory instead of two. That part (the PCB) may easily be the only one that's truly unique to each design, so if your guess/prediction about how the two designs will sell is wrong, keeping your inventory balanced can be quite a bit simpler. For example, ordering more of a custom PCB will typically have considerably longer lead time than ordering more of standard capacitors, resistors, off the shelf ICs, etc.

Largely, cost controls. You have one board, or a small family, make them flexible, and populate those parts that you need for a given product. Sounds cheesy, but in large production, every nickel can count.

You can leave some filter parts out for product destined for countries that are not so picky about EMI and save 20 or 25 cents a unit.

There are many reasons to have minor variations on a theme. That particular board in the photo is likely a stamped board (not drilled) so there is some capital cost in the manufacturing, and (more importantly) the case will be sized to take the biggest board it has to so there are no savings in making multiple blank PCBs, only cost and another custom part to inventory (after stuffing the blank part numbers fork into multiple sub-assemblies, of course, so the savings may not be that great).

For example, in Altium, these are referred to as "Assembly Variants". The same schematic and PCB source documents can be used to produce BOMs for each variant. Parts may be omitted, part numbers changed, or values altered for each variant.

In the case of the item in the photo, it looks like the radial disk part is used in one variant, and the magnetic part in another variant.

As other answers state, multiple products may be economically provided by the same PCB, or manufacturing flexibility in the face of varying supplier reliability ('second sourcing') requiring alternative parts to be accommodated from alternative suppliers.

The circuit in your photo is part of a switched-mode power supply (SMPS). The part in that has been omitted looks like a a transformer (one side has two terminals, the other has three, so it's unlikely to be a common-mode choke). The transformer has been replaced by either a capacitor or transient suppressor. Note that the capacitor lies within the outline of the transformer - indicating the designer fully intended it would be an either/or design. Now, the PCB is also single-sided. This is the most popular choice for consumer products due to it being the lowest cost. So the location of the transformer or the capacitor with respect to the copper tracks underneath forbids both parts being fitted.

Most products these days have 'universal' power supplies removing the need for voltage selection switches in different parts of the world [EDIT - for the same reason, using different EMI components for different regions is very unlikely for a global product. The USA, Canada and EU are very demanding in this regard so once your design is capable of satisfying those needs, it's more costly to do EMI versioning on geographical grounds than it is to have a common design]. So the 'versioning' implied by the transformer or capacitor is that the capacitor is being used to provide a DC barrier that would otherwise be provided by the transformer. My guess is that this is part of the primary side of the supply to bias the SMPS primary controller, and the capacitor is simply a cheap alternative to the transformer. In other words they found during production and testing that the capacitor would do as good a job as the transformer in this particular case but they left the transformer on the layout in case it turned out not to be the case, or because there is more than one product that uses this PCB and the capacitor-bias is inadequate for that product.

PCB's are pre-fabricated , So in case of circuit changes in the long run it is often incorporated in the same board until and unless there are drastic changes to the design.

3
How should I design a schematic component for a component library?
11
What component does the 'coupon' label refer to in terms of PCBs?
38
Why does a commercial PCB need this much rework?
20
Why don't we have very high layer count PCBs (usually a maximum of 4-6 layers)?
4
Split capacitor PCB mounting?
17
Why do some PCBs have exposed plated perimeters?
0
Stackable PCB Sockets/Headers