Critique for my short circuit indicator and guidance to improve it

The circuit uses two NPN transistors BC 547 to sense the short circuit. If the assembled board is normal, current flows from the power supply through polarity protecting diode D2. The Assembled board gets power and Green LED lights.

At the same time Q2 forward bias and its collector goes to ground potential. This makes Q1 off due the absence of base bias. Buzzer and Red LED connected to the collector of Q1 remains off. If there is a short circuit in the board under test, D4 reverse biases and Q2 turns off. Now the base of Q1 becomes high and it conducts. This turns on Buzzer and Red LED to indicate short circuit.

Now, I'm using general purpose components here, what I want its to make this circuit "universal", or at least usable for currents up to 10 Amps, I have some questions,

Any feedback about how can I improve this is welcome 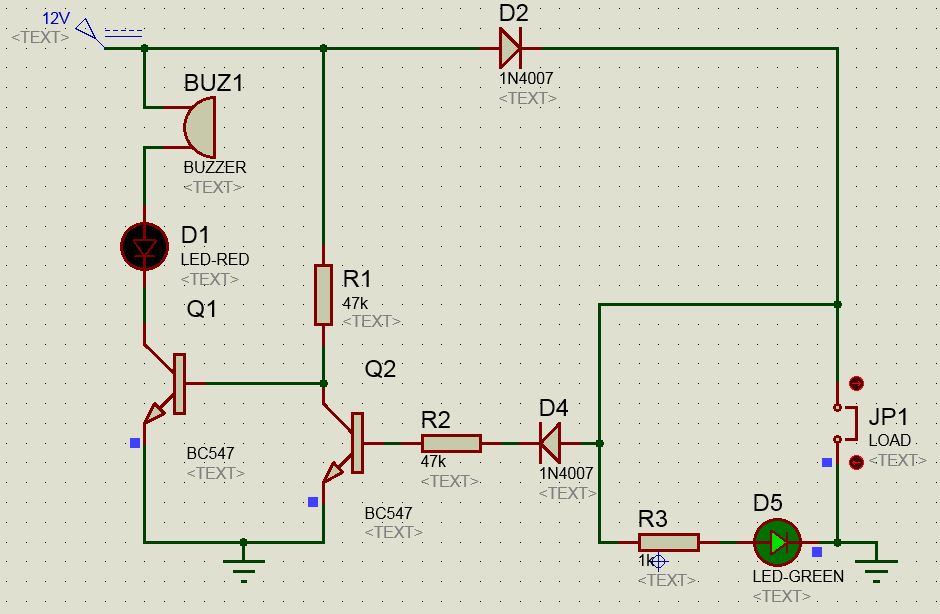 I see a couple of problems with your circuit:

If it's a short circuit, won't that pull the power supply down near zero... nothing turns on!? (Have you tested this circuit with different power supplies?) When powering up a circuit for the first time (that may have shorts) I like to use a current limited supply. (Sometimes that's one with a changeable max current, but other times it's just a wimpy supply that can't source too much current.

(This doesn't really answer your question, but I think its relevant to other readers...)

You can get electronic fuses that are designed for this purpose. For example, the TPS25921.

Devices such as that have traditional current limiting circuits, but with integrated thermal protection. On a short, the resulting behaviour is that they can 'test' the line repeatedly until the fault is cleared while keeping the current below the design current, making them suitable fuse replacements.

In addition, the more advanced ones like the TPS25921 will feature over and under-voltage protection for transients (though you then need to protect the IC itself from them when it switches!), and fault indicators (for your LEDs).

The TPS25921 is not rated for 10A, but there are many variants. I'd guess they'd be roughly double or triple the cost of the components you'd replace in your diagram, but compared to the time to implement, debug, PCB space saved, etc, probably still be quite economical.

Not the answer you're looking for? Browse other questions tagged protection short-circuit fuses review or ask your own question.